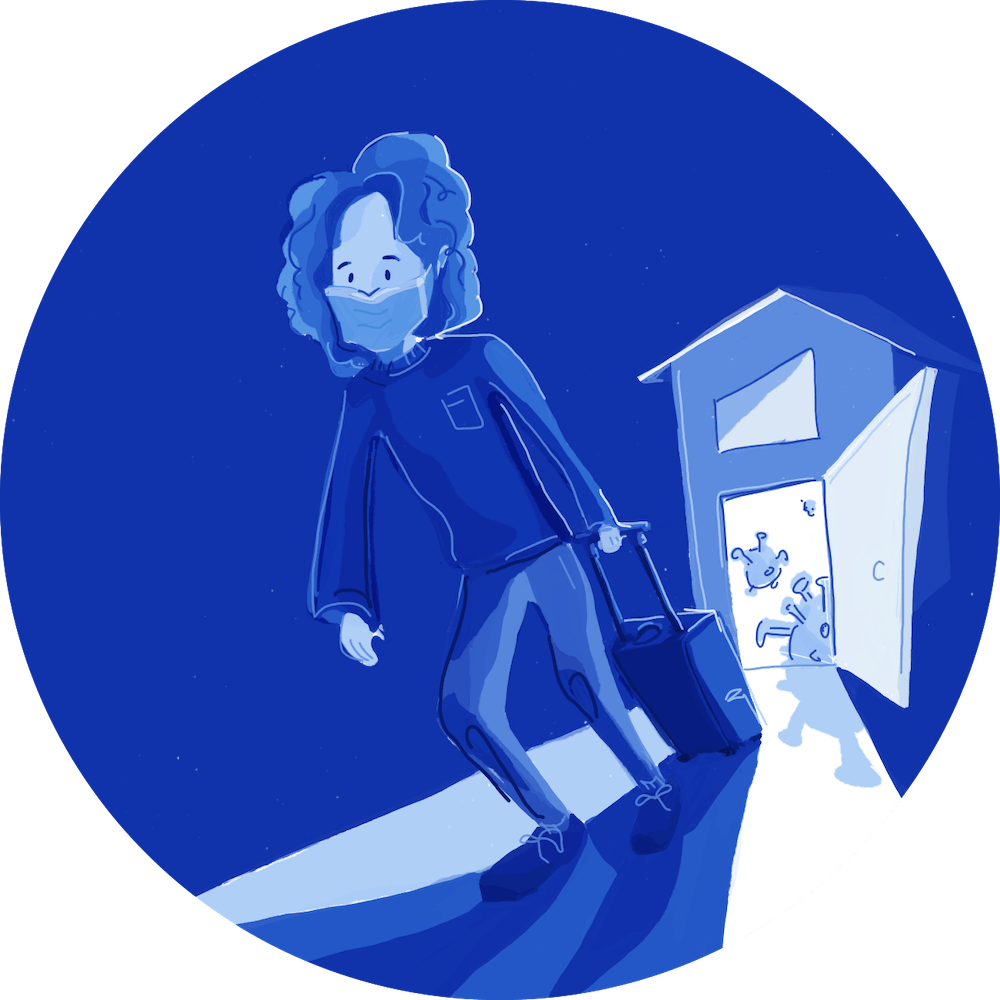 Editor’s Note: Some students who tested positive for COVID-19 were given the option of remaining anonymous in the interest of protecting private medical information. Anonymous students were given false names, which have been marked with an asterisk on first reference.

Despite the high COVID-19 vaccination rate on campus, the pandemic has continued to disrupt life at Rice. Last month, new students matriculated anticipating a relatively normal year. Hopes were quickly dashed as on-campus COVID cases increased during Orientation Week, and some students had to isolate or quarantine. The Thresher spoke to three new students who spent part of O-Week in isolation.

Gabriela Quintero, a freshman at Baker College, said she was in isolation for four days. According to Quintero, she received a positive COVID test during O-Week and was moved to Lovett College to isolate. Quintero, however, was asymptomatic. She said that she requested to be moved when she was joined by a symptomatic student, and she was later relocated to McMurtry College.

Quintero said that although she felt advisors did their best, it was still disheartening to join orientation via Zoom.

“Doing O-Week online was a bit of a bummer,” Quintero said. “While they tried their best to make events interactive via Zoom, sometimes you could not get the same feeling as in-person [events].”

Jonah Lubin, a freshman at Hanszen College, arrived on campus on Aug. 15. Three days later, Lubin received an email saying that his COVID-19 test result from the day before was positive.

“Crisis Management reached out to me. They told me to stay put where I was. They moved my three roommates out to the Westin hotel, but they kept me in my dorm room,” Lubin said.

Amidst all of this, O-Week was still taking place. Since Lubin’s residential college, Hanszen, recorded a high number of cases, O-Week activities were largely moved online.

Lubin said he did not enjoy the online O-Week.

“It was less engaging,” Lubin said. “The night before I had a false positive, we had a dance party and we were doing all these fun events. The next day [Thursday] we just had academic meetings. It wasn’t as fun as the rest of O-Week was. The last couple of days would have been better for social interactions if it was in person.”

Soon after Ron* arrived on campus, he was afflicted by severe allergies and a bad cough, so he scheduled an appointment with Student Health Services, he said. According to Ron, the doctor concluded his symptoms were the result of allergies and smoke inhalation in the days prior but told him to get tested for COVID as a precaution. Ron said he filled out a health reporting form.

“A team contacted me and set me up in Old Sid,” Ron said. “That was the beginning of the craziness.”

Ron said he felt his O-Week experience, which took place online for him but continued in person for the rest of his group, was not as engaging. Ron said he would often disengage from the activities and instead slept, ate or stared out the window.

“I [couldn’t] really do anything,” Ron said. “I would scroll through social media and watch what everyone else was doing. All I wanted to do was get out of there. O-Week coordinators did their best. But there’s a giant disconnect between isolation and actually participating. My O-Week group offered to Zoom me into dinner and I thought that would be a mess — they wouldn’t be able to hear me.”

Ron said he felt scared of sharing his result and later returning to his residential college.

“I felt like I had missed out on everything,” Ron said. “I felt that school had failed me. I felt scared to return … to my O-Week group and college for fear I would be an outcast for having possibly had COVID.”

The positive COVID test results of Quintero, Lubin and Ron were part of an issue involving multiple testing anomalies due to a change in the protocol used by one of Rice’s testing providers. After Rice administration recognized this issue, students in isolation were permitted to return to the larger campus community with two negative COVID tests.

Lubin said that ultimately, his ability to foster new relationships has not been too negatively impacted by his days in isolation. He also said this is due in part to his efforts to meet as many new people as he can.

“I joined the flag football team and have already made friends through that,” Lubin said. “The days in quarantine didn’t hurt me too much socially because everyone was going through something somewhat similar, and I was thankfully only isolated for a few days.”

Lubin said he has made strong connections and built a good friend group.

“Right after I was released from isolation I met more people around campus,” Lubin said. “If I was in quarantine for more than a few days that would have definitely hurt. There were still enough days of O-Week [in person] to give me strong connections.”

Quintero said she was not impacted by the transition to an online format since she was able to attend most of the O-Week activities in person prior to entering isolation. She said she felt that her experience during the first half of O-Week enabled her to cultivate new relationships.

“I believe it was a blessing that my quarantine came at the end of O-Week and not the beginning because I think it would have been far more difficult to come in late rather than leave early,” Quintero said.

Quintero said that isolation was a bit disheartening at first but she decided to be optimistic about  her circumstances.

“I decided to laugh at the comedy of the situation rather than think about what I was robbed of,” Quintero said. “I do sometimes wonder what that week would have been like if I had not been isolated, but I do not think it would have been detrimental for me.”

Quintero said it hasn’t been too difficult for her to integrate into the Rice community after isolation.

“I have been doing great socially,” Quintero said. “I think after being isolated, I was able to get right into things here at Rice with ease. In-person classes have really helped create opportunities for friendships. Sports have also been so helpful for creating relationships on campus.”

Ron said that for him, the days he spent in isolation hindered his ability to connect with other individuals. He said he has missed out on a number of valuable interactions.

“Social interactions would be far easier as I would have been able to bond with more of my class, learn more people’s names and get a better idea of our culture,” Ron said. “Socially it has been rough as my main social group is my O-Week group.”

Ron said that his isolation has had an extremely negative impact on his social life on campus and that he feels he does not know most of his fellow freshmen.

“[After I was released] some people remembered who I was; some people didn’t,” Ron said. “I really wanted to know more of my freshman class.”