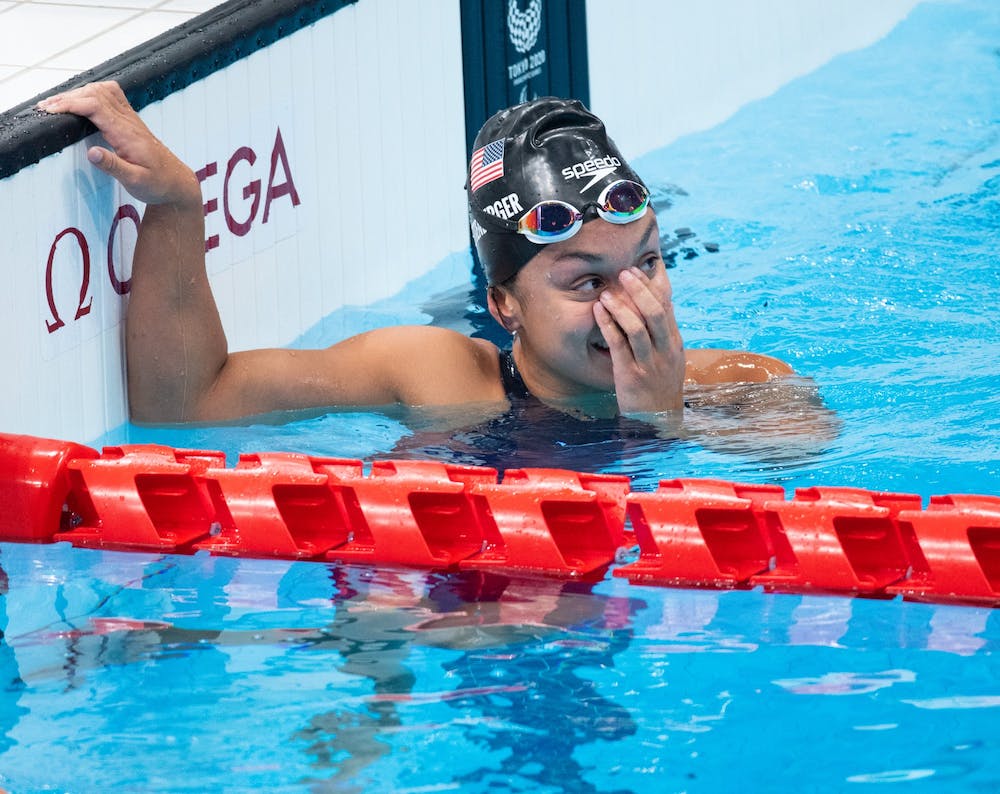 Junior swimmer Ahalya Lettenberger took home the silver medal in the SM7 200-meter individual medley on Friday at the 2020 Tokyo Paralympic Games, and followed up her appearance on the podium with a fourth place finish in the S7 400-meter freestyle on Sunday. According to Lettenberger, medaling at the Games is a feeling that will be difficult to match any time soon.

“It really means everything, like I still can’t really believe it; it’s pretty surreal,” Lettenberger said. “The feeling when I touched the wall and looked up at the board, I don’t think I will ever have that feeling again in my life; it was just like pure joy and happiness and surprise. It feels incredible, and to be able to represent the United States and win a medal for our country is just really special, and just being here was my dream, and to win a medal, it’s so hard to describe. I never would have dreamed of this happening.”

Coming down the home stretch of the 200-meter individual medley, Lettenberger found herself in fourth place, but she was able to surge in the last 50 meters to catch and then pass her competitors. But, this was something she anticipated going into the race.

Lettenberger’s time of 3:02.82 beat out Australia’s Tiffany Thomas Kane’s time of 3:03.11 and Canada’s Danielle Dorris’ 3:03.16 time for the silver medal. According to Lettenberger, taking home second place in a fiercely contested race made it that much sweeter.

“It definitely made it that much more satisfying and just emotional at the end just having that close race,” Lettenberger said. “I was talking with some of my competitors afterward, and we were just saying it’s pretty awesome that we were all so close, and it just shows how far the Paralympic movement has come and for us to be that close between second and fifth, it was like a second separating us all, it really did make it that much more satisfying and incredible at the end.”

According to Lettenberger, she doesn’t usually get too emotional following her swims, but this time it was different.

“I don’t really get emotional after I swim a lot, and so I was like ‘oh if I swim well, I don’t see myself having that big reaction or anything,’” Lettenberger said. “But then it’s so different when you’re actually here. The Games are a completely different environment, and so when I touched the wall, I’ve never gotten that emotional after a swim before.”

Following her silver medal finish, Lettenberger then competed in the S7 400-meter freestyle race on Sunday. Lettenberger narrowly missed out on coming home with multiple medals as her time of 5:13.55 was just short of USA’s Julia Gaffney, who rounded out the medal stand in third place with a time of 5:11.89.

While her time in Tokyo has come to an end, Lettenberger said that it left a lasting impression on her.

“Being here in the village, I’ve gotten to meet so many different people and being in races with all these people from other countries, I’ve made a lot of friends and been able to make a lot of connections here,” Lettenberger said. “It’s just an environment of acceptance because for once in our lives, we are not the minority. When you look around, and you see people missing limbs, people who are blind, people in wheelchairs, and nobody thinks twice about it, it’s really just a feeling of belonging and being where I’m supposed to be.”