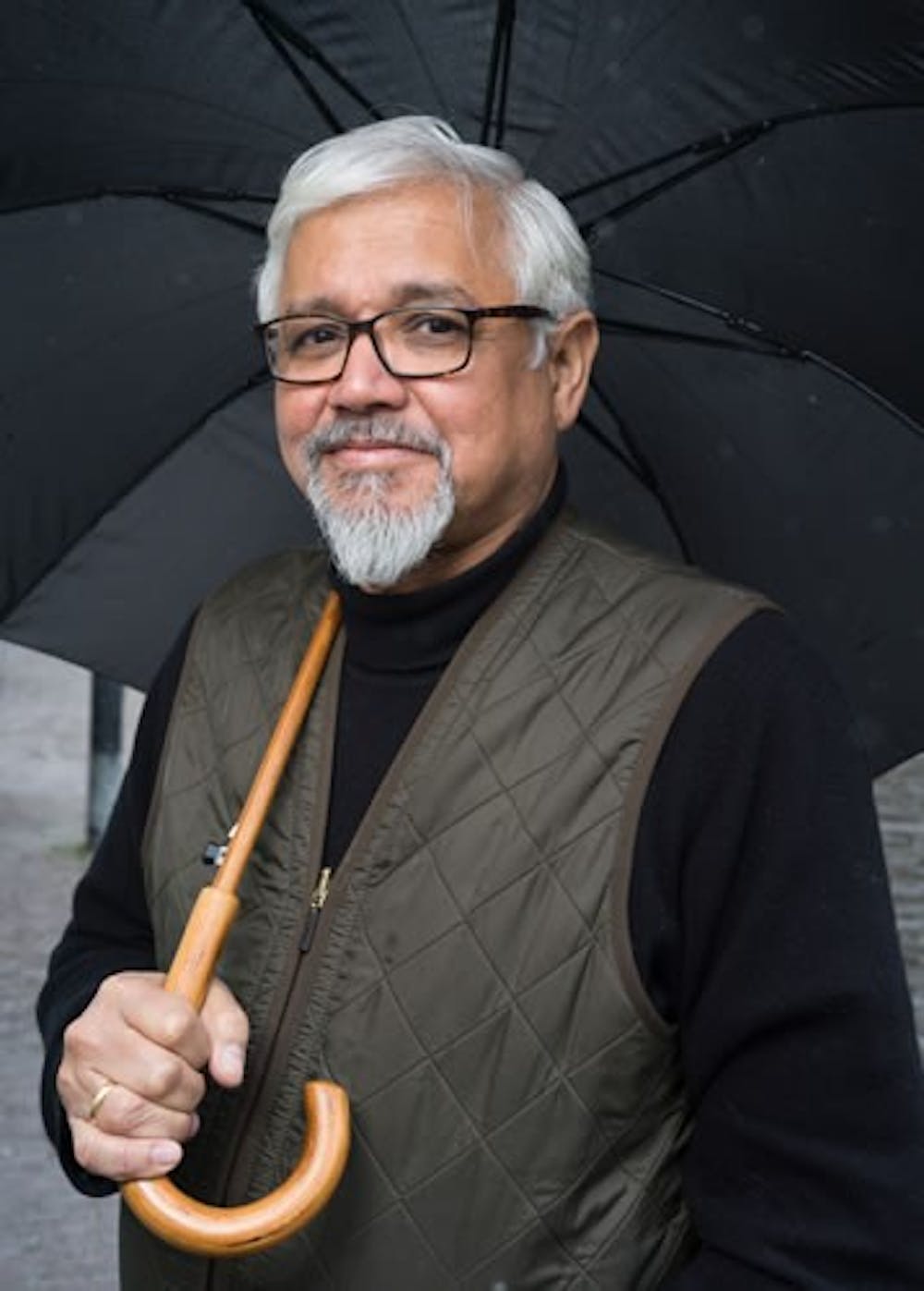 Decorated Indian writer Amitav Ghosh explored the connection between the history of Western colonial exploitation of the Indian Ocean’s resources and present-day climate change in a Sept. 13 lecture delivered on campus and via Zoom. Ghosh’s work has been translated into more than 30 languages, his essays have appeared in The New Yorker, The New Republic and The New York Times, Foregn Policy Magazine has named him one of the most important global thinkers of the decade and he is the first English-language writer to win India’s highest literary honor, the Jnanpith Award. Ghosh’s talk, entitled “Embattled Earth: Commodities, Conflict and Climate Change,” was a part of the Campbell Lecture Series hosted by the School of Humanities Dean’s Office.

Ghosh began with the topic of his newest book, “The Nutmeg’s Curse.” For milenia the global supply of the valuable spices of nutmeg and mace originated solely from a sprinkling of tiny dots in the far southeastern quadrant of the Indian Ocean known as the Banda Islands. Ghosh said that at the end of the Middle Ages, European powers hired navigators, such as Christopher Columbus and Vasco da Gama, in a spice race to impose monopolies and build empires.

In 1621, after failed attempts of diplomacy between the Dutch and the inhabitants of the Banda Islands, the Dutch decided to replace the Bandanese inhabitants with settlers and slaves to create a new plantation economy, according to Ghosh.

“The governor general of the Dutch East Indies, who coined the aphorism, ‘No war without trade and no trade without war,’ decided the Banda problem needed a final solution,” Ghosh said. “Over a period of a few weeks, the Dutch effectively eliminated the entire population of the island. Several thousand were killed, several thousand died of starvation or disease and the rest were enslaved and deported.”

According to Ghosh, this centuries-old story is still relevant to the contemporary issue of climate change. He said that similar to the way Western colonial empires exploited the resources of the Indian Ocean for wealth and power at the expense of indegenous peoples like the Bandanese, today’s wealthy Western countries compete over fossil fuels in the name of capitalism and power at the expense of the Earth.

Ghosh said that most researchers have focused on capitalism as the primary obstacle to an energy transition away from fossil fuels. While it is an important factor, an exclusive focus on the economy prevents us from identifying other obstacles that are not easily quantifiable, according to Ghosh.

“The only way these obstacles can be identified is by stepping outside the framework in which fossil fuels are resources,” Ghosh said. “It isn’t only because they produce energy that fossil fuels have come to be established as the core of modern life. It is also because the energy they produce interacts with structures of power in ways that are specific to fossil fuels.”

Ghosh said that since their inception, fossil fuels have been used in ways that reinforce the power of dominant classes and nations. He said individuals are reliant on companies to provide energy through the grid while nations are reliant on fossil fuel-producing countries to provide energy through global, transoceanic shipments. According to Ghosh, a transition to renewable energies would have enormous liberating potential for both individuals and nations.

Yet beyond the vested interest of capitalism, global superpowers have much to lose from a transition to renewables, according to Ghosh. Because fossil fuels are unevenly distributed and must be shipped overseas, their flow can be controlled by exerting pressure over a few maritime chokepoints. Ghosh said these chokepoints, most of which are located in the Indian Ocean, are the exact same locations that European colonial powers fought over to control the spice trade.

“Out of this arises a geopolitical dynamic that leads directly back to the conflicts that erupted around nutmeg,” Ghosh said. “On the whole the geopolitical continuities created by Gaia’s quirky shaping of the Indian Ocean have remained remarkably consistent. Over centuries [they have] been enforced and defended by Western military and maritime powers.”

Ghosh said that as the world transitions to renewable energies, the value of military control over the flow of fossil fuels will diminish and result in a revolution in the distribution of geopolitical power.

“Ultimately the fate of a global energy transition will not depend solely on technological innovations and the availability of finance,” Ghosh said. “It will also depend, crucially, on whether the populations of the status quo powers are able to accept and adapt to the geopolitical transitions that an energy transition will inevitably entail.”

According to Ghosh, the end of imperialism, not capitalism, is the pressing area of discussion in the battle against climate change.

“That which is harder to imagine than the end of the world is the end of the absolute geopolitical dominance of the West,” Ghosh said. “Yet it is precisely this prospect that now looms, adding a further dynamic of uncertainty to the planetary crisis.”

Martel College sophomore Maggie Smith attended Ghosh’s lecture. She said that she liked how Ghosh’s lecture pushed her to reconsider the issue of climate change through a wider lens.

“Ghosh’s lecture was an intricate, masterfully woven illustration of the negative impacts of Anglo-centric empire on our climate and the natural world,” Smith said. “Having previously read his book The Great Derangement in HUMA 124: Is This the End?, I felt the same push toward a type of climate activism that doesn’t just center impacts of material consumption but also power dynamics which the Anglo-Western world holds over other countries.”