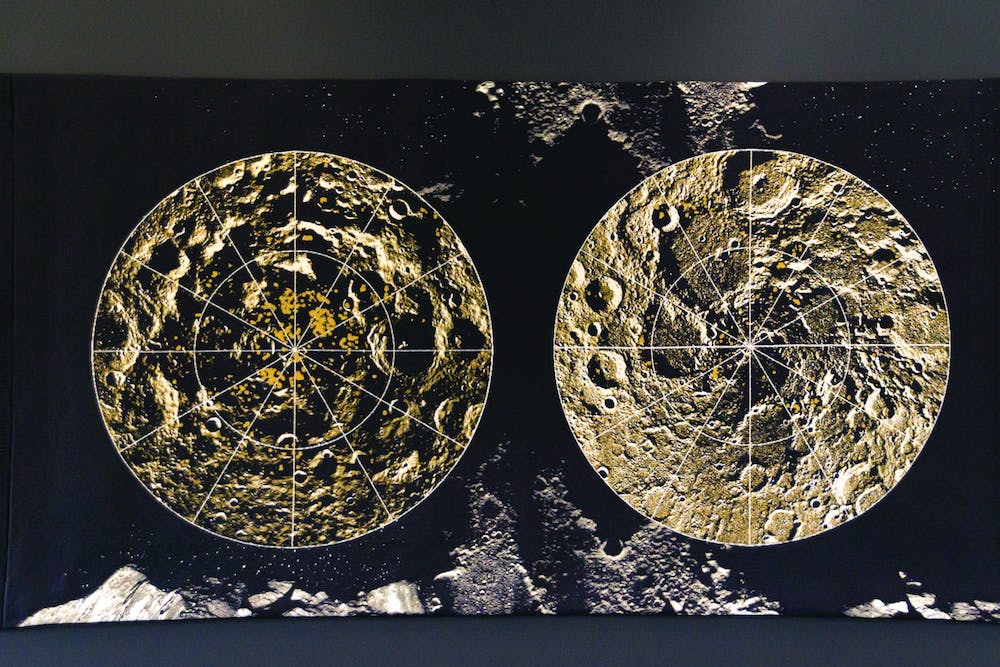 The third installation of the Moody Center for the Arts’ Off the Wall series, Clarissa Tossin’s “The 8th Continent” opened at Brochstein Pavilion on Sept. 24 and will remain there until Aug. 27, 2022.

“The Off the Wall series is a partner with the core residency program at the Museum of Fine Arts, Houston,” Alison Weaver, executive director of the Moody Center, said. “We commission an alumnus of the program to come back to Houston and create a site-specific work that’s on view for one year.”

“I’m interested in what is happening in terms of the privatization of space exploration in the 21st century and how different that is from space exploration in the 20th century,” Tossin said. “When you start seeing private companies getting to the moon or Mars, the conversation might change from scientific advancements to the extraction of natural resources, turning to profit.”

The tapestries include maps of specific locations on the moon with high concentrations of ice deposits. The first panel illustrates the Shackleton Crater, the location of the next NASA lunar mission. Tossin said that she turned her attention towards these ice deposits after conversations with professionals from the Rice Space Institute and Houston Lunar and Planetary Institute during the research phase of the process. While the

“The ice deposits, I’ve learned through conversations with scientists — one of them from Rice University, Dr. David Alexander from the Rice Space Institute [can be extracted to use in fuel],” Tossin said. “The water molecules can be broken into hydrogen. Hydrogen turns into rocket fuel for spaceships or fuel for any machinery operating on the moon, Mars or other celestial bodies.”

The darkness of both the wall in Brochstein and the background of the tapestry are set off by metallic thread shining against the inky black background. It offers a contrast that invites the viewer to look closer and lends a sense of opulence to the tapestry.

“My interest in [using metallic thread] was to link this tapestry to the history of the tapestry in the Renaissance and medieval times,” Tossin said. “I wanted to explore this relationship with the color[s] of gold and silver, the first precious metals that were extracted and had a high value and how empires were built on that kind of wealth.”

Stark white lines divide the moon’s surface, dissected by the use of mapmaking techniques. The vastness of space is limited by the lines drawn over it.

“Whoever creates a map is asserting a certain narrative onto that land and claiming a territory,” Tossin said. “The moon is very much mapped. Every single geographic feature has a name, but you see most names are written in either English and Latin. The language that you lay over land will apply a certain narrative to that space.”

A recreation of “Earth Rises,” the first photograph of Earth taken from the moon, makes up the third panel. Earth is miniscule in the background, emphasizing the expansiveness of space. The moon overshadows Earth, looming over it as it becomes the new avenue for resource exploitation.

Tossin said that she hopes viewers come away from the piece critically considering how mapmaking and empire-creation goes hand in hand as well as thinking about our mentality on natural resource extraction, both celestially and on Earth.

“What we need is a change of perspective and the way we go about finding the resources we need to operate,” Tossin said. “It’s not thinking that we can push the same kind of attitude [of resource extraction] towards space.”