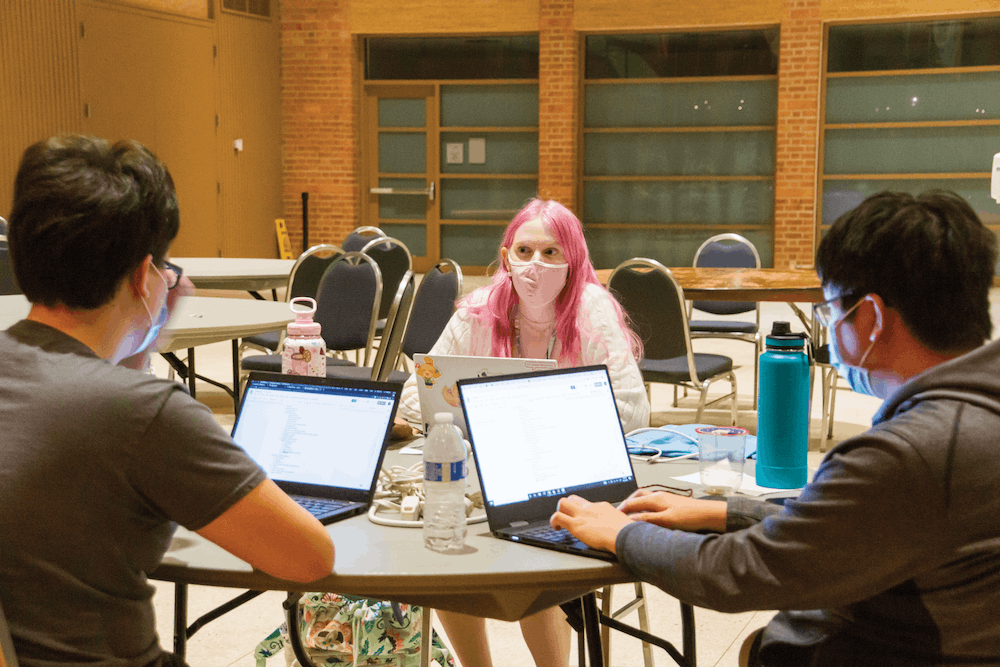 The four students created this project for HackRice, a coding competition in which teams of four have 36 hours to write and submit a project. This year marked the 11th edition of the event, which featured 429 Rice students and 120 non-Rice registrants — the largest HackRice ever.

According to the team of HackRice11 directors, Lucia Lu, Ryan Draper, and Eddie Xiong, their advertising and many last minute sign-ups increased the level of participation.

“We publicized [the event] in every collegewide ... GroupMe and Facebook group,” Draper, a Lovett College junior, said. “We were anticipating about 300 students to register, but [on] our last day, we got 150 [more] responses.”

Thoth, which was declared the winner of the competition on Sunday, faced a couple bumps along the way, according to Yu, a Martel College senior. In the end, the team of four was able to code a working prototype.

“We actually had an accident where we realized our plan A wasn’t working, and we were able to immediately fix it, and grind everything out,” Yu said.

The directors said they hosted workshops before the event to encourage accessibility for less experienced coders. According to Draper, this year’s HackRice saw an unusually high number of first-time competitors.

“It’s the highest proportion of first-time hackers that we have seen, particularly in comparison to HackRice10,” he said.

Ali Khokhar, a Sid Richardson College freshman, said HackRice11 was his first hackathon. He and two other members of his team attended a computer vision workshop at Duncan Hall before HackRice began.

Khokhar, along with Huzaifa Ali, Abdullah Jahangir and Taha Hasan, won second place for their project, VoiceOver, that converts videos of sign language to automated speech.

“I was watching some random YouTube video where they were struggling with a deaf person speaking up,” Khokhar said. “Everyone else was talking over him. I decided, why shouldn’t he get the chance to speak up?”

Thomas Kaldahl, a Baker College sophomore, worked with David Zhao and Elizabeth Sims to code AbleTube, an extension that makes YouTube more accessible for people who are physically disabled. AbleTube won third overall in the competition.

“This is our first time doing anything like this,” Kaldahl said. “The majority of our group [had] actually never touched any of these programming languages [before].”

With the rise of the Delta variant in Houston, COVID safety concerns arose, according to the HackRice11 directors.

“There were a lot of plans we had for in-person [events] that we ended up having to change,” Draper said.

The directors said they set up many precautions to make HackRice11 adaptable to a hybrid format: No eating was allowed inside, every event with an in-person option had a capacity limit and food was served in waves to prevent large crowds. Xiong said that the HackRice11 directors also worked closely with the Rice Crisis Management Team.

While hackers were allowed to remain remote for the event, a large portion of HackRice11 took place in the Rice Memorial Center, where COVID guidelines were well implemented, according to Yu.

“We had a seat limit, and anyone who couldn’t find a seat couldn’t work in the RMC,” he said. “[The COVID safety guidelines] were for the best.”

Kaldahl said that he recognized the work the HackRice committees put in, specifically in providing a dual-delivery experience for the event.

“I was very impressed with how they made the whole event accessible online,” Kaldahl said. “I feel like it didn’t compromise the in-person experience. I think they did a great job of balancing those two [aspects].”