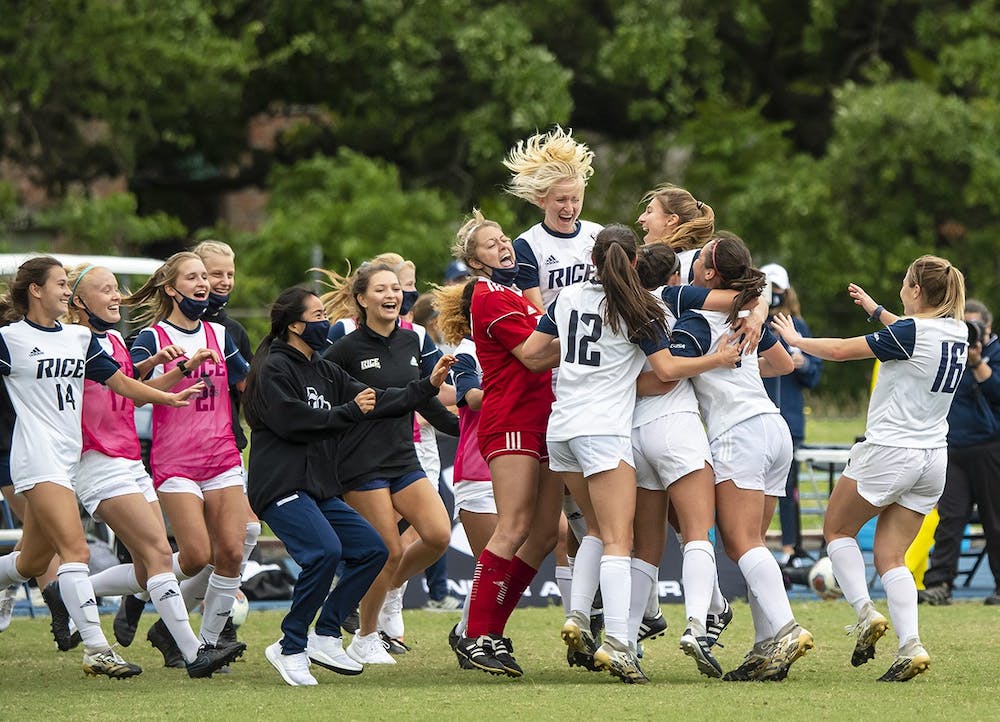 "Obviously, [I’m] super excited that we got the winner and held them off there in the end, and [now] we’re off to the Sweet Sixteen," Lee said. "Regardless of results, the effort our kids put in mentally and physically and how well they took to the preparation with the game plan, it’s just a very fulfilling day win, lose, or draw.”

Fresh off their win over Furman University on Wednesday afternoon, the first NCAA tournament victory in program history, the Owls looked to continue their run on Saturday by knocking off No. 5 WVU. This would be a tall order as the Mountaineers were making their 21st consecutive NCAA tournament appearance tournament this year as an at-large bid after posting a 10-2-1 record. Considering the athleticism and size of the Mountaineers lineup, Lee said he knew his squad had to be efficient in order to win the match.

Both teams opened the match aggressively, as counter-attacks and corners were plentiful. However, as the match progressed in the first half, the Mountaineers took control, pressing higher up the pitch and retaining a majority of the possession. As a result, the Owls struggled to get out of their own half and create chances offensively, and didn’t attempt a single shot in the first half. While the Owls’ offense struggled to find its footing, their defense, led by senior defenders Mijke Roelfsema and Caleigh Page, stood firm in denying the Mountaineers from having any clear goal-scoring opportunities, despite nine shot attempts in the first half. Roelfsema credited the team’s defensive effort and communication for their successful performance.

"The communication was really good and everyone got it together and stepped up," Roelfsema said. "It was a team effort, and I’m really happy about how the defense played [in] this game."

As the halftime whistle blew, the match remained a scoreless deadlock. WVU had been the more aggressive team, but they had nothing to show for it on the scoreboard.

The start of the second half was more of the same. The Mountaineers continued to stifle the Owls’ offense and command possession by winning the ball higher up the pitch. A WVU goal seemed in the cards after a Mountaineer header careened off the post early in the half. Just as it seemed WVU would convert their long-building momentum into a deciding goal, the Owls found themselves knocking on the Mountaineer’s door.

Senior defender Callie Ericksen lofted a ball into the box for sophomore forward Izzy McBride. As McBride was about to make a play on the ball, WVU’s sophomore goalkeeper Kayza Massey came off her line to make a challenge. Massey missed the ball, and instead made contact with McBride, who went down in the box. The referee awarded a penalty to the Owls in the 74th minute, and junior midfielder Delaney Schultz stepped up to the spot, looking to give the Owls the improbable lead. Schultz collected herself, and then powerfully struck her shot into the top left corner out of Massey’s reach, giving the Owls a 1-0 lead on their first and only shot attempt of the entire game. After the game, Schultz said she felt confident that she’d be able to convert the eventual game-winner.

"I was confident," Schultz said. "We take [penalty kicks] every day at practice, so I think the repetition of that made me really confident [before taking the shot]."

Lee had initially opted to go for a three centre-back backline, with two wing-backs who looked to push up the field, but after taking the lead, Lee pulled the wing-backs into the defense, to help preserve the lead. WVU pushed many of their players up the field to try and score an equalizer late in the game, but once again, the Owls defense resisted every incoming attempt that the Mountaineers threw at them, earning the Owls their 11th shutout of the year. With the Owls defense limiting their opposition’s scoring chances, junior goalkeeper Bella Killgore knew that it was only a matter of time before the Owls offense would come through.

"I think we shut them down defensively and limited their chances a lot," Killgore said. "As long as the defense can keep shutting them down and frustrating them, we have faith in the offense to make something happen. We knew we were going to get a goal."

By the end of the game, the Mountaineers had managed 20 shots, compared to just one attempt by the Owls. While the full-time stats tell the story of a one-sided affair, numbers never tell the full story, and now the Owls find themselves farther into an NCAA tournament than any other Rice team in the last 15 years. Their next game, against No. 12 UVA, will kick off at 8 p.m. on Wednesday night.