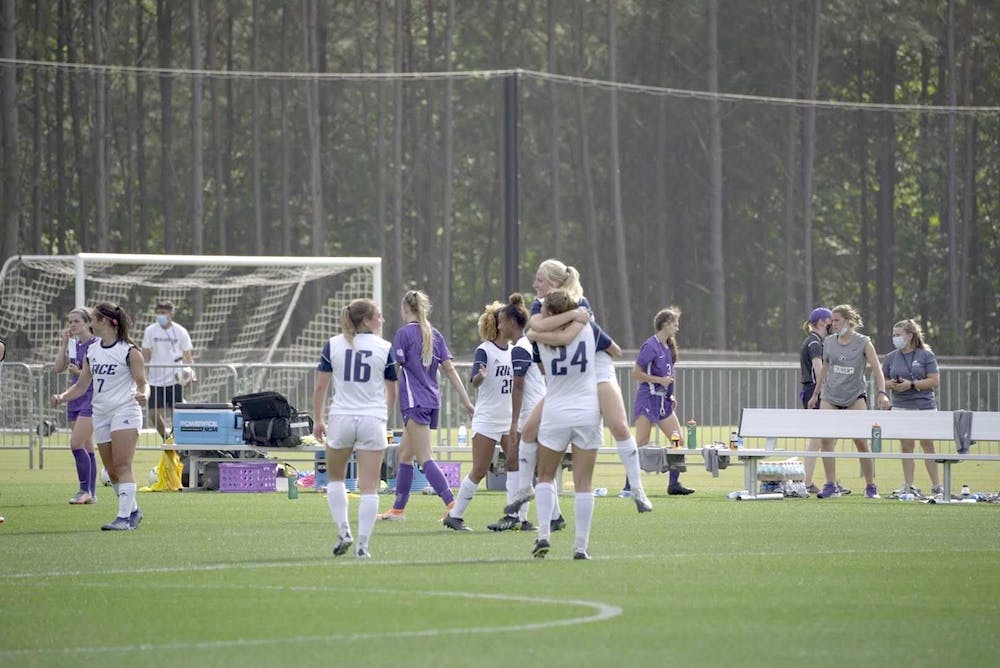 “I thought we put in a really good shift and a complete 90-minute performance,” Lee said. “Even at the end of the game, I thought we ran out the game very, very well.”

The Owls headed into the NCAA tournament on a hot streak, winning their final nine games and shutting out their last eight opponents, including the University of North Carolina at Charlotte in the Conference USA championship game. Making their fifth appearance in the NCAA tournament, the Owls matched up against Furman, who were fresh off a Southern Conference title and boasted an undefeated record of 8-0-2.

The Owls were the aggressors early on in the game, dominating possession in the attacking third, creating multiple chances and forcing many corners. However, the Owls had little to show for it on the scoreline, and the game script soon flipped as the Paladins struck first in the 18th minute. An overhit pass out of bounds by the Owls led to the Paladins taking possession. A quick one-touch pass split two Owls defenders, finding redshirt sophomore forward Kyndal Anderson in the middle edge of the box. Anderson tucked her shot into the bottom left corner to give the Paladins an early 1-0 lead. While it was a less than ideal start for the Owls, Lee was pleased with how his team righted the ship shortly thereafter.

“[We] came out of the gate great and, I thought, created a bunch of chances, and then all of a sudden we’re down one-nil,” said Lee. “I thought our reaction was really good; we stayed the course and got ourselves back in it. If we get down, they are good about staying the course and keeping on the way we’re headed.”

Despite going down early, the Owls continued putting pressure on Furman’s defense, and they were soon able to score an equalizer in the 25th minute. A long throw-in into the left side of the box by senior defender Caleigh Page allowed freshman forward Natalie Gorji to connect on a looping header that found its way into the top left corner, out of the goalkeeper’s reach. Coming into the game, Gorji had found the back of the net only once, but getting on the scoresheet against Furman was no surprise to Lee.

“She sure did have a great flick header on the long throw,” Lee said. “[Gorji] is a real fox in the box. In training, she scores goals consistently, and it’s part of getting used to college soccer, she’s gotten better and better over the course of the spring this year, and she keeps improving.”

Soon after equalizing the scoreline, Gorji netted her brace at the 37-minute mark. Solid buildup play from the Owls led to junior midfielder Delaney Schultz drew the attention of three Paladin defenders and found an open Gorji in the middle of the box. Gorji took a touch and powerfully struck a left-footed strike above the keeper’s reach and below the crossbar to give the Owls a 2-1 lead heading into halftime.

The Owls continued to add to their lead in the 66th minute when Schultz sent a through ball between two Furman defenders, finding freshman midfielder Mikala Furuto who was making a run into the box. Seeing the Paladins’ goalkeeper coming off her line, Furuto slid a well-timed ground shot out of the keeper’s reach to make the scoreline 3-1 in favor of the Owls. Despite conceding first, the Owls defense stifled the Paladins in the second half, allowing Furman to only two shots in the half.

“The communication of our team is really good, and our effort is very high, so if you have those two things, you are going to be good defensively,” Lee said. “[Killgore] fits this system really well and couldn’t ask for anybody more as the last line of defense.”

The Paladins could not overcome the deficit, and the Owls held on to take the victory and advance to the next round of the tournament. The Owls’ offensive prowess, which saw them create 22 shots to Furman’s eight, will look to be on full display when they take on their next opponent, West Virginia. The Mountaineers are ranked No. 5 in the nation, and come into the tournament with a 10-2-1 record, unbeaten in their last four games. Lee knows the challenge that the Mountaineers pose, but is excited for his team to prove themselves in the next round.

“Obviously, they’re very good and really well-coached, and it’s going to be a challenge, but that's [how] the NCAA tournament works; every round you advance, you get a chance to prove yourself [and] compete against higher-level teams,” Lee said. “But for today, we’re going to celebrate this win and then work on getting our bodies right tomorrow and then turn our attention to West Virginia.”

The Owls will look to continue their recent unbeaten form and progress in the NCAA tournament at 11 a.m. on Saturday morning against No. 5 West Virginia in the second round. The game can be streamed at NCAA.com.