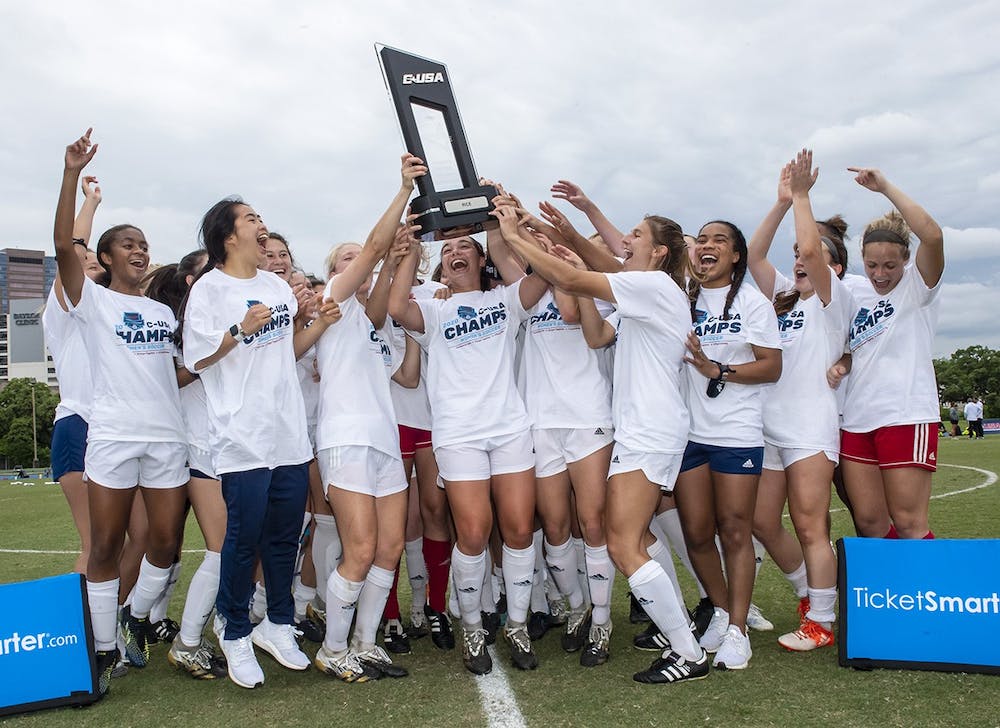 This past Saturday afternoon, at a packed Holloway Field, the Rice Owls soccer team won the Conference USA championship for the third time in program history, defeating the University of North Carolina at Charlotte 2-0 in the C-USA tournament finals.

After a strong start to the game that yielded no goals, the Owls took the driver seat in the 31st minute when senior midfielder Rebecca Keane scored her first goal of the season. Just two minutes later, senior defender Callie Ericksen scored the first goal of her collegiate career off of an assist by junior midfielder Madison Kent.  With a two goal lead heading into halftime, head coach Brian Lee said he felt confident in his team to finish the job and hold off the 49ers.

“I felt comfortable because I felt like we were in control defensively throughout the game,” Lee said. “I thought Charlotte came back into the game late, but our defense held them off without a good chance, as we have done for most games.”

The Owls offense slowed down in the second half, but their two goals were enough to secure the win. The defense managed to complete the shutout, holding the 49ers to just six shots all game, with only two shots on goal. As always, anchoring that defense was junior goalkeeper Bella Killgore, who  delivered her eighth straight complete game shutout.

In addition to winning the C-USA Championship, many Owls received accolades for their performance throughout the week. Senior defender Mijke Roelfsema won the tournament’s defensive MVP award, while junior midfielder Delaney Schultz was named offensive MVP. Schultz said she appreciated the recognition but believed that the team’s success was due to the overall team effort.

“I was very honored to receive the award, but I think it is more a reflection of our entire team and our ability to create and attack throughout the entire tournament,” Schultz said. “The award could have been given to any individual in our offense and it would have been well deserved. The collection of big moments from so many different players is why we had such a successful week. It was truly an amazing team effort.”

Though she didn’t receive any tournament accolades, freshman midfielder Catarina Albuquerque contributed throughout the week, including the game winning goal in a penalty shootout in Thursday’s semifinal. Albuquerque felt that winning the championship was a big achievement, but felt even more special winning the trophy as a freshman while also highlighting the amount of work that her teammates put in.

“I honestly could not have asked for a better start to my college career,” Albuquerque said. “Being able to achieve such high achievements in my first year at Rice makes me feel so proud of all the hard work everyone on the team has put in these last couple of months. This determination to work hard and the willingness to do everything possible to be the best versions of ourselves on the field, has ultimately led to our success this season and our place in the NCAA tournament.”

In addition to winning the C-USA Tournament, the No. 22 nationally ranked Owls have clinched a spot to participate in the NCAA tournament. With the tournament starting later in the month, Lee believes that his team is prepared for the upcoming challenge.

“The effort and attitude of our team has not wavered the entire year,” Lee said. “We think we are fresh, fit and continue to improve, even though we are late in the season, as our desire, composure and physical readiness are all top level.”

Schultz also feels confident in her team to perform well in the national tournament later in the month and potentially make Rice history in the process.

“We are very confident and excited headed into the NCAA tournament,” Schultz said. “It is important for us to not look too far ahead so right now we are just focused on that first game. Rice soccer has never won an NCAA tournament game and we are determined to change that.”

On Monday, the Owls found out that they will be facing Furman University in the first round of the tournament.  The Paladins enter the tournament with a record of 8-0-2, fresh off of a victory in the Southern Conference championship game. The match will serve as a homecoming of sorts for Lee, who played at Furman, before starting their women’s soccer program and coaching there for 11 seasons. The winner of the match will advance to the next round to face No. 5 West Virginia University.

Beyond the NCAA tournament and the rest of this season, the team has a positive outlook on the future of the program. After securing a conference title in just his second season with the team, Lee is optimistic about the progress that the program has made while emphasizing his belief in collaboration and teamwork.

“It’s a great sign of progress, but more importantly a fantastic achievement for our current student-athletes,” Lee said. “This is wonderful evidence of how much can be accomplished with a collaborative effort from everyone involved with the program.”

For Albuquerque, the unique experience of winning conference in her first year with the team, has left her appreciative of the contributions of the team’s older players, while also excited about what the team is capable of in the future. She believes that the guidance of the team’s leaders built a very special team dynamic that will be critical for the program as it continues to grow.

“The tremendous passion and dedication [my older teammates’] have for the team is demonstrated in their hard work in every training session and is something that I try to emulate on a daily basis,” Albuquerque said.  “Our accomplishments this season also leave me very excited for my next few years here, as they have demonstrated our strong team dynamic and the talent that the team has and will continue to have for the duration of the program.”

The Owls will hope to continue their season against Furman in the first round of the NCAA tournament on Wednesday, April 28 at 2:00 pm. The game will take place at a neutral site in Cary, North Carolina, which is among a handful of neighboring sites where the entire tournament is taking place.