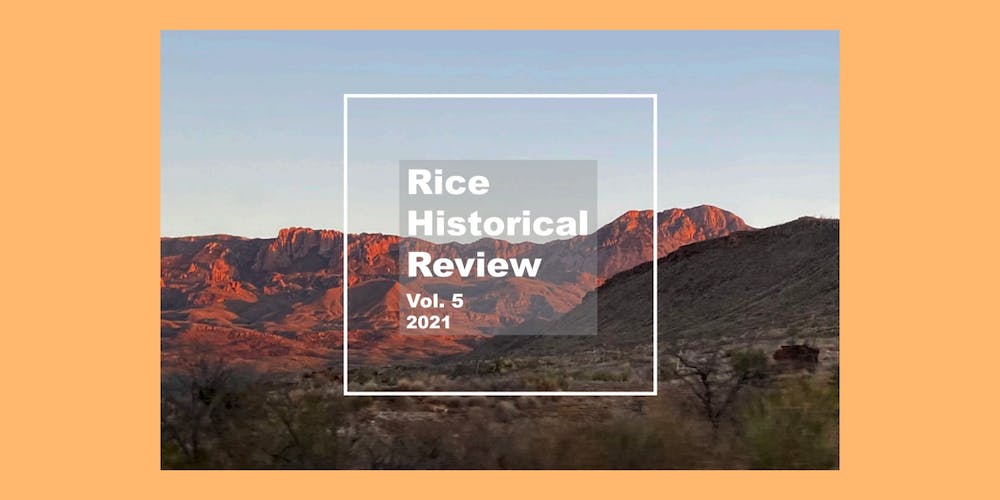 “I guess I was really searching for a little comfort and hope in the historical resilience of humanity,” Wang said. “As an Asian-American, I took this opportunity to not only produce a historical essay, but also to draw inspiration and hope from the Sephardic Jews, who despite enduring suffering from both disease and violence, showed remarkable resilience through the production of their commemorative and medical literature as well as the continuation of their economic roles in the second half of the fourteenth century.”

Wang’s paper, “The Jews of Spain and Black Death,” is one of the five articles in this year’s issue of the Rice Historical Review, which will be available online on April 19. The issue’s theme, “Untold Histories,” reflects the underlying significance of the selected articles, which all examine aspects of history absent from popular consciousness, according to RHR co-editor-in-chief and Baker College junior Victoria Saeki-Serna.

“All of these articles celebrate narratives [of] state actors which have either been taken for granted or populations whose stories have largely been silenced,” Saeki-Serna said. “The historical research in the papers we are publishing do an outstanding job at bringing untold histories to our readers’ attention.”

The journal’s spotlight is on the past, but the research might have connections to the present, according to Saeki-Serna.

“As a history-based journal [we] try to not dabble as heavily into current affairs, unless we are discussing the historical context, because we feel that is not necessarily our scope,” Saeki-Serna said. “But you can see the pandemic reflected [in] one of the articles we’re publishing: ‘Suffering and Resilience,’ which talks about the Black Death.”

Jason Lee’s “The Role of the Familiar Spirit in the Glanville-Webster Witchcraft Debate” explores the political influences of Protestant controversies in disputes on witchcraft. Meanwhile, Mariana Nájera’s “Becoming Brujas: Colonial Witchcraft and Historical Transgression” uncovers race and gender norms’ effects on accusations of witchcraft in colonial Mexico as revealed in court records. Michael Katona’s “Pope Benedict XV’s Reassertion of Papal Diplomacy through Impartiality with Germany during the First World War” and Callie Carnahan’s “Christabel Pankhurst: The Life and Legacy of a Suffragette Misunderstood” shed light on the contributions of a pope and British militant suffragette to international relations and women’s rights, respectively, in the early twentieth century.

The RHR editorial board collects history-focused research papers by Rice students of any major and selects a few of them for publication in their annual journal. Most submissions are assignments for a class, but some are independent research papers, according to Saeki-Serna. Nájera’s article, a modified excerpt from her religion honors thesis, is this year’s winner of the Floyd Seyward Lear Prize for Best Essay — jointly awarded by the RHR and the Rice history department.

On its website, the RHR also publishes short form content, such as interviews with professors and student paper submissions, which often provide historical context for current events, according to Saeki-Serna. She and Spencer Moffat, a Baker College senior who directs the RHR’s short form content, conducted pandemic-centric interviews with history professor Lan Li and former Rice historian Melissa Kean, respectively. Kean discussed the COVID-19 pandemic in comparison to the 1918 influenza pandemic, which intersected with World War I, at Rice.

“That was a really interesting interview [with Kean, and it gave] a perspective on how even though this pandemic has been so horrible for so many, in many ways, it dwarfs in comparison to the pain and suffering that so many people were going through at Rice during World War I and during the influenza epidemic,” Moffat said.

Saeki-Serna said the pandemic has affected the RHR’s operations, which are normally based on word-of-mouth communication and interpersonal connections but had to translate to a virtual format. Another obstacle was February’s catastrophic winter storm, which hit Texas when the RHR was calling for submissions — very unfortunate timing, according to Saeki-Serna. In spite of the challenges, she said she is excited about this year’s exceptional issue. Unlike the spring 2020 issue, this year’s journal will also be published in physical copies, which will be distributed at the end of the semester, according to Saeki-Serna.

“I’m very proud of our board this year because we actually demonstrated a lot of perseverance and adaptability, and we were able to overcome [the] hurdles by just having consistent meetings and talking very precisely over text and whatnot,” Saeki-Serna said. “Ultimately I think that in the three years I’ve been here at Rice, this has been our strongest journal yet.”

“I’m really proud to see how we as a team have grown closer, through the production of this journal,” Saeki-Serna said. “And I hope that it helps provide an opportunity for [not only] other history students but also other humanities students in general. [Through the journal, you get] to see what your fellow students are doing and to participate in research outside of the classroom and in it as well.”