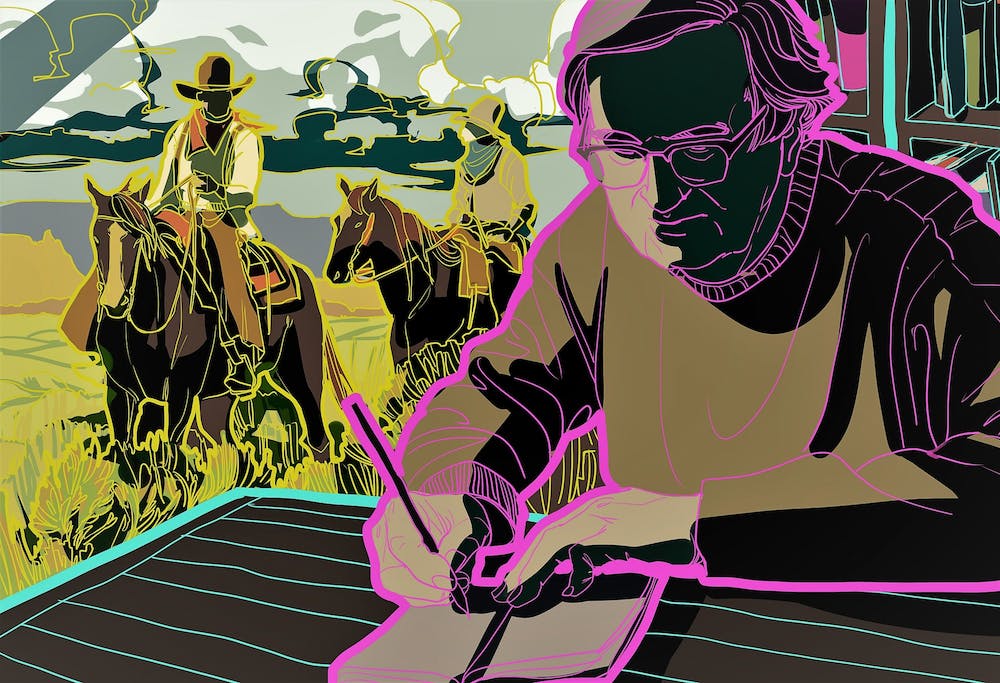 Adapted from the short story by Annie Proulx, McMurtry and Diana Ossana wrote the screenplay of the 2005 film “Brokeback Mountain” that depicts the romantic and sexual relationship of cowboys Ennis Del Mar (Heath Ledger) and Jack Twist (Jake Gyllenhaal). The film, accused by many conservatives as pushing the “gay agenda,” was a critical success with a limited commercial release and appeared on many critics’ lists as the top film of 2005.

The film won the Academy Awards for Best Director, Best Adapted Screenplay and Best Score and has been considered by many to be a landmark in LGBTQ+ film history. “Brokeback Mountain” is available to watch on Netflix.

McMurtry later expressed dissatisfaction with the popularity of the novel and, in the preface of the 2000 edition, said that he had delivered a “Gone with the Wind” of the West, an idealization of the American West instead of the anti-Western the novel was meant to be. However, it is still widely acclaimed and, for any potential readers, can be purchased at a local bookstore (after all, McMurtry once managed a bookstore in Houston).

As a former graduate student and professor at Rice, McMurtry used the city of Houston as a backdrop for several of his novels. Several books make up what is referred to as the “Houston Series.”

“Terms of Endearment,” a member of that series, centers around the overprotective widowed mother Aurora and her daughter Emma who hastily marries and battles cancer throughout the novel. It was later adapted into the 1983 film of the same name, which ended up winning five Academy Awards (Best Picture, Best Director, Best Actress, Best Adapted Screenplay and Best Supporting Actor), more than any other film that year.

This 1966 coming-of-age novel is set in the small (but fictional) town of Thalia, Texas. “The Last Picture Show” follows teenagers Jacy, Duane and Sonny and their efforts to keep the town’s movie house open, something that brings to mind the recent closure of River Oaks Theatre in Houston.

The novel was later adapted into the 1971 film of the same name, and McMurtry was a co-writer on the screenplay. The Library of Congress selected the film for preservation in the National Film Registry in 1998, and the film won two Academy Awards of the eight it was nominated for. Both the novel and film are enduring reminders of McMurtry’s work.

Although not a written work, Booked Up is the bookstore that McMurtry owned and operated in his hometown of Archer City, Texas, and represented years of the writer’s dedication to literature. Originally founded in Washington D.C. with additional stores in Houston, Dallas and Tuscon, Arizona, the shop eventually consolidated into four buildings in Archer City, which is a five-and-a-half-hour drive from Houston.

Any aspiring Texas tourist would find a site worth visiting in Archer City. The bookstore at the peak of its collection size had 450,000 books available for sale. The shop downsized in 2012 with McMurtry hosting “The Last Book Auction,” an event that referenced his 1966 novel and sold roughly 300,000 books over the course of three days. Booked Up is still standing, now occupying two buildings instead of four, and has McMurtry’s awards and achievements on display, including his Academy Award for Best Adapted Screenplay for “Brokeback Mountain” in the rare book room.