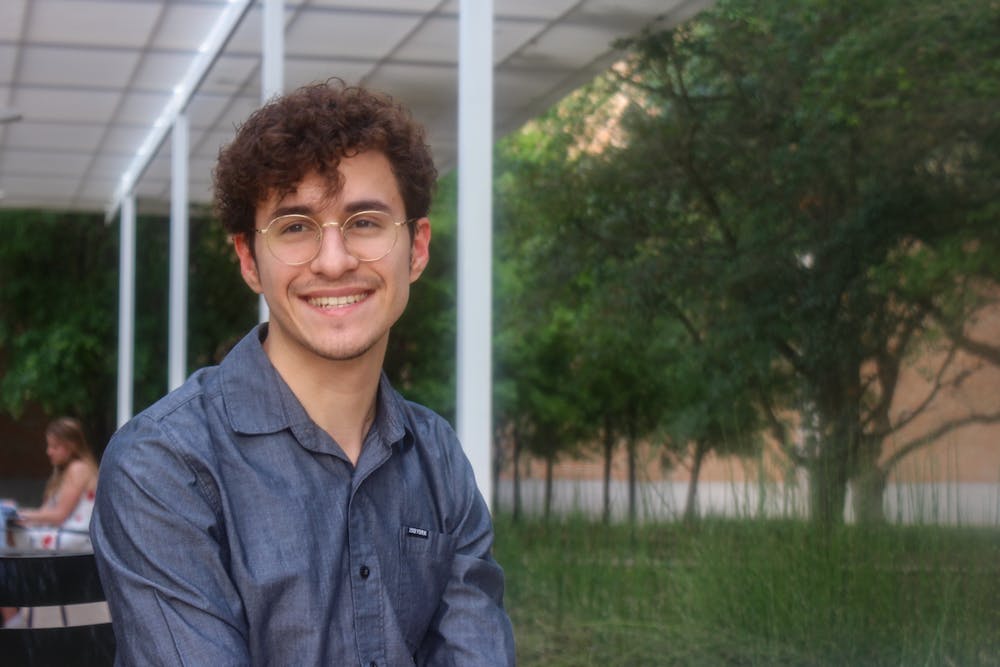 Although Adulfo Amador studies biochemistry, he has a great passion for engineering. The McMurtry College senior has spent his time at Rice volunteering with his high school’s robotics team and working on Rice Eclipse. Blaise Willis/Thresher

Ever since Adulfo Amador, a McMurtry College senior, was a young child, he knew he wanted to attend Rice. As a native Houstonian, Amador visited campus often with his family, and when the time came, he applied early. The day he received his acceptance was a memorable one — it quite literally took his breath away.

“I was at a National Honor Society meeting and got the email. I think I got too excited and I almost passed out from low blood pressure,” Amador said. “One of my friends had to go to the vending machine and get me a sugary drink so that I could calm down. I was pretty elated that I was accepted.”

Amador, who is interested in attending medical school, decided to major in biochemistry upon matriculating at Rice. However, Amador said that most people are surprised by his major because he is always at the Oshman Engineering Design Kitchen doing engineering projects.

“I’ve actually taken some [mechanical engineering] classes and am currently participating in a [bioengineering] senior capstone,” Amador said. “But, yes, I’m a biochemistry major with an engineering design minor who likes taking random classes in other majors.”

In addition to this, Amador is taking a bioengineering capstone class in which he works with five other people to create a portable incubator that will be used for water quality testing in low-resource communities, he said.

Amador’s passion for engineering is also reflected in the various internships he’s completed during his time at Rice, including working in the Engineering Directorate EV8 division of the Johnson Space Center. His project focused on implementing a network using LoRaWAN, a relatively new communications protocol that has the ability to transmit small bits of data over great distances. Amador said his internship was not only an educational experience but also a gateway to another interesting opportunity the following summer.

“[The Johnson Space Center internship] lets you interact with professionals who know about the opportunities out there,” Amador said. “After the first internship, I met another doctor who was interested in my abilities and requested that I apply for an internship the following summer.”

That doctor was working on developing a space band-aid, which Amador was able to help him with. When someone gets a cut in space, Amador said, the blood just flows out everywhere. While they do have band-aids, they need a quicker way to seal the wound for longer space missions.

“I was helping develop a protein solution that could be smeared on the cut and then solidified with radio frequency waves,” Amador said. “This would provide a quick seal of the wound, and since the compound was just proteins, the skin would be able to absorb it. It was a pretty fun internship.”

Alongside engineering, Amador has been involved with robotics, an activity he first began in the fifth grade. When he first came to Rice, he kept up with robotics in various clubs.

While Amador has been a part of Rice Eclipse for the past couple of years, he has also spent a lot of time helping high school students in the area with an interest in robotics, he said.

“I typically spend most of my time volunteering for my former robotics team as a mentor,” Amador said. “It’s a good program to get people interested in engineering, especially girls. Engineering is a male-dominated career, even today. In this program, some teams are composed exclusively of girls; this is their way of pushing the boundaries.”

Although the pandemic has affected robotics programs in high schools, it hasn’t deterred Amador from continuing to serve as a mentor for his high school’s team.

“More recently, there has not been much to do due to COVID, but I was invited to help plan out a new robotics facility for the school district that will hopefully be built for next year's season,” Amador said. “I plan to keep mentoring my former team and help build the robotics program in [Goose Creek Consolidated Independent School District] ...One thing I’ve been most consistently passionate about would be mentoring.”

Amador not only mentors the FIRST robotics team, he was also given another opportunity to take on the role as a mentor when he got a job at the OEDK. He was nominated for a leadership position for the Summer Experience in Engineering Design (SEED) program which is meant to further develop engineering projects that were made at the OEDK. Amador and a fellow student, Baker College senior Grant Anderson, were in charge of more than 20 students, half from Rice and the other half from Malawi.

“I had done leadership roles in the past, but this was new. It was kind of like a manager role, which I’ve never really been in a position to do,” Amador said. “It involved getting to know all the students, making sure the international students felt welcome in Houston, and planning events. It was definitely a different leadership experience.”

With the end of senior year approaching, Amador is already considering options for after graduation. While Amador is interested in Rice’s bioengineering graduate program, he plans to take a year off for research, he said.

“Some of my mentors have told me that I could make a good professor,” Amador said. “Who knows? I always like to keep my options open. Currently, that means going to medical school, but my mom always said to keep an open mind. If the right opportunity presented itself, who knows?”