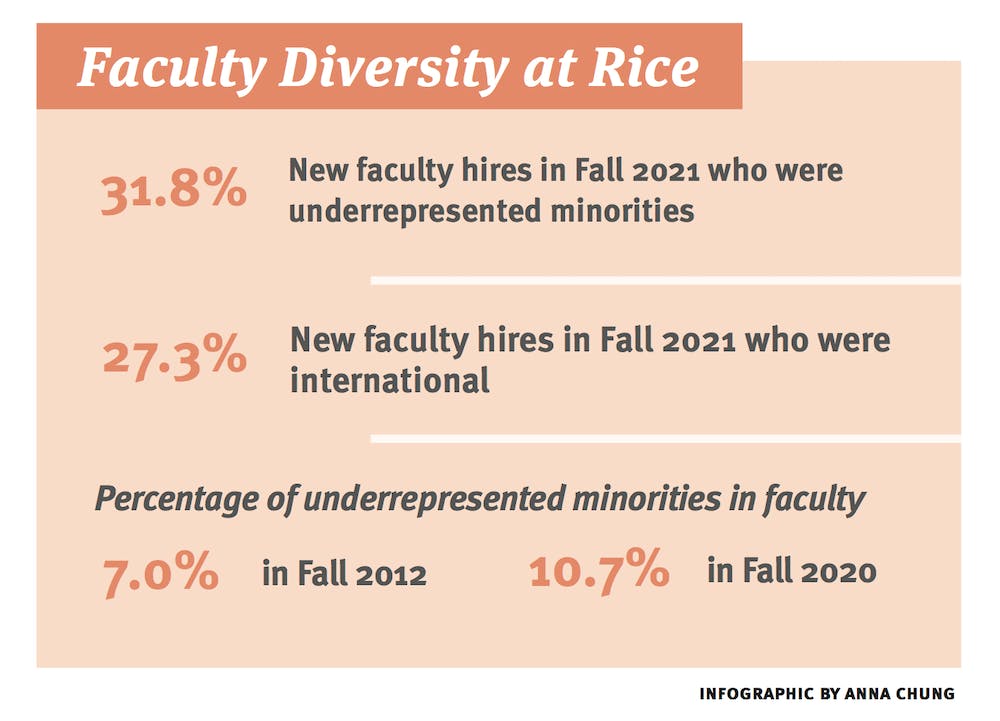 “These [new faculty] will be allocated to areas where we have the greatest need and strategic commitments, both in terms of research and teaching,” Leebron wrote in an email.

Provost Reginald DesRoches said that the new hires from fall 2020 were nearly 50 percent women and 25 percent underrepresented minorities, and he expects another very diverse fall 2021 class of new faculty.

“In my own experience, the majority of my professors have been white males,” Cuaresma said. “During my entire time at Rice, I have only had three women professors, and only one was a minority woman. However, that being said, I think the Rice faculty is trying to foster more inclusivity and cultural awareness by introducing non-western cultures and asking more students questions about how to expand diversity in the overall curricula.”

Elisabeth Torres-Schulte, a Martel College sophomore, said that faculty diversity depends on the department, but is rare in general.

“[In] electrical engineering, I don’t know of a single female faculty member,” Torres-Schulte said. “I’m sure there are, I just don’t know them. Psychology on the other hand has more, [but] underrepresented minorities are still pretty rare no matter the major.”

John M. Cornwell, associate vice president of the Office of Institutional Research, said that diversity at the department level has wide variability, partly because the number of faculty within particular departments varies widely.

According to Torres-Schulte, though she would like to see better representation in her professors, diversity is not her top priority.

“I would never want the university to prioritize diversity over merit or credentials in hiring,” Torres-Schulte said. “So if they’re hiring people, I want [the administration] to get the most qualified person. I don’t care what their race, ethnicity, gender [or] sexuality is.”

According to Leebron, there has been increased success in implementing diversity practices in faculty hiring, and he believes expanding both faculty and the student body will also contribute to increasing diversity on campus substantially.

“The most important elements [in faculty hiring] are perhaps assuring that there is very significant effort on outreach and building a diverse pool of candidates … implementing hiring policies, practices and behaviors that are viewed as welcoming and inclusive by diverse candidates and identifying whenever there may occur key hiring opportunities of outstanding diverse faculty that we may learn of, and encouraging schools and departments to identify such candidates as an ongoing matter,” Leebron wrote in an email.

According to Leebron, the student-faculty ratio is expected to remain at a ratio of about 6:1 after the addition of new faculty.

“It’s important to keep in mind that the student-faculty ratio is not fixed over time and indeed tends to fluctuate in both directions,” Leebron said. “We may be able to grow the faculty more, but that will depend on a number of circumstances, including both endowment returns and gifts to the endowment to support professors.”

DesRoches said that there has been a considerable amount of work done across the university to diversify the Rice faculty.

“We hired a vice provost of diversity, equity and inclusion (DEI), which means we now have a tenured faculty member developing and overseeing a vision for diversifying our faculty in addition to looking at other parts of the university with respect to DEI,” DesRoches wrote in an email.

According to DesRoches, the administration has also provided support to existing and new academic programs that have successfully recruited diverse faculty.

“The newly launched Center for African and African American Studies (CAAAS) in conjunction with the departments of English, Art History and Anthropology has been exemplary in this regard,” DesRoches wrote in an email. “CAAAS has been instrumental in the direct recruitment of faculty in African and African American Studies … as the scholarship and teaching based in CAAAS reflects a set of priorities that stimulates and attracts prospective faculty from across the university.”

DesRoches said that the provost’s office also encourages departments and schools to bring forth cases for hiring talented faculty from diverse backgrounds, regardless of whether there are any current openings.

Rapha Onyeka, a Baker College junior, said that the lack of diversity in faculty can create frustration for minority students.

“As a black STEM major, I have only had a few non-Caucasian presenting professors,” Onyeka said. “I find it slightly frustrating, especially because it seems that professors from non-majority backgrounds tend to be present mostly in cultural-specific courses and rarely in general STEM courses. It is also very awkward to have white professors leading the discussion on some issues, like bias, as has happened in some of my courses.”

Louma Ghandour, director of the Office of Faculty Development, said that the faculty search committees have training on faculty diversity even before the hiring process.

“All members of faculty search committees attend a session about conducting equitable searches,” Ghandour wrote in an email. “We discuss strategies to avoid implicit bias at different stages of the search process, from job posting to site interviews … The goal is to recruit and hire leading researchers, scholars and educators who will contribute to Rice’s diverse intellectual environment and culture.”

According to Ghandour, no new training sessions have been set in place to accommodate the estimated 50 faculty hires in the future.

“Our current sessions include increasing faculty diversity,” Ghandour said. “We adapt the discussion every year to include recent research and trends we are seeing. The goal is to move the dial, every year.”