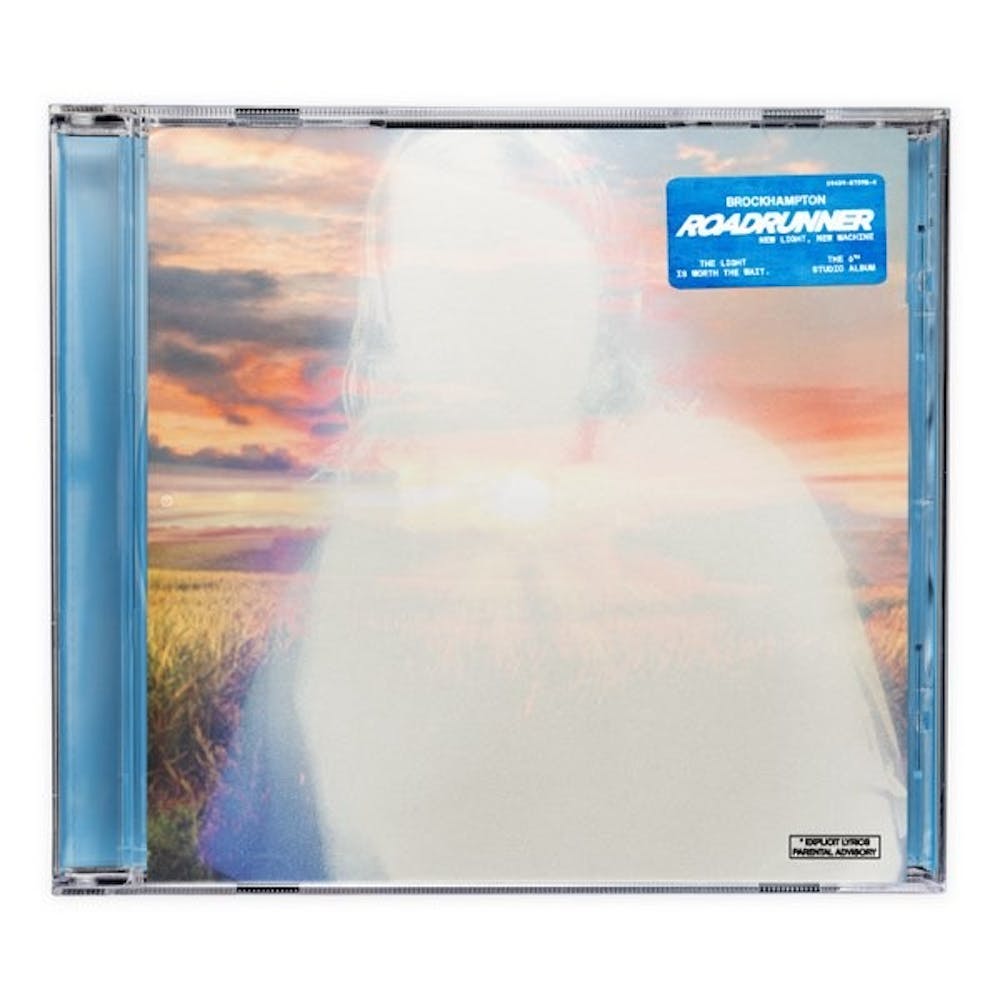 “ROADRUNNER: NEW LIGHT, NEW MACHINE” marks BROCKHAMPTON’s first return to the studio since their 2019 project “GINGER” and a series of informally recorded tracks released throughout the pandemic. “ROADRUNNER” includes deeply personal themes for BROCKHAMPTON’s members, backed with some of the group’s cleanest production and elements such as guitar flourishes. Though this new project may isolate fans who prefer a more rap-influenced style from the self-proclaimed boy band, “ROADRUNNER” sees the group’s most cohesive fusion of pop and hip-hop.

The album cover shows a ghost-like, transparent outline of member JOBA in a jewel case with a promo sticker, seemingly an image of the album’s physical CD copy. The ephemeral image resonates with the “NEW LIGHT” element of the album title and the lyric featured on the cover, “the light is worth the wait.” These elements seem to suggest a newfound clarity or spirituality for the group. The cover’s physical nature also calls to mind albums like Kanye West’s “Yeezus” and Post Malone’s “Beerbongs & Bentleys” that have similarly utilized photos of a CD release as their digital cover art. This line of influence and reference to West’s work is notable as some BROCKHAMPTON members were recruited to the band with a post from founding member and singer Kevin Abstract on Kanye fan forum KanyeLive (now KanyeToThe).

The album begins with “BUZZCUT,” the most explosive and energetic track on the album. Led by Abstract, the track features a siren-like beat that opens up the album on a distinct note from the majority of the songs that follow. “BUZZCUT” leans more heavily into the familiar rap elements of BROCKHAMPTON, even including a skilled verse from Danny Brown, before breaking down into a slower, pop-influenced outro similar to tracks like “POWER” from Kanye West.

A highlight of the album, “THE LIGHT” features personal messages from JOBA and Abstract. It begins with a spoken intro from JOBA that addresses his mental state and the general depression that comes with the state of the world today. The song is placed over an emotional electric guitar-heavy beat that allows the verses to shine as the open wounds that they are. JOBA raps about the suicide of his father, an event that has left him in a state where he raps, “When I look at myself, I see a broken man / Remnants of my pops, put the Glock to his head.” JOBA uses his verse to open himself up and try to deal with the loss and how it has affected him. Abstract leads the second half of the song and raps about his childhood in Texas and relationship with his family. Abstract confesses, “I still struggle with tellin' my mom who I'm in love with,” to emphasize her initial reaction to his sexuality and the specific difficulties of coming out as gay in Texas and to what he has described as an “extremely religious” family.

“I’LL TAKE YOU ON” features R&B and funk musician Charlie Wilson and embraces a more laid-back feeling that would not feel out of place on the radio with a catchy melody and memorable inflections. The layering of bearface, JOBA, Kevin Abstract and Matt Champion’s vocals in the chorus creates a strong sense of harmony and is one of the band’s closest moments to the classic image of a boy band. The song’s lush production is one of the album’s finest examples of BROCKHAMPTON’s pop abilities.

An early favorite for me was the JOBA-led track “WHAT’S THE OCCASION?,” which features a verse from Champion and a pensive, fingerpicking guitar part. The song is another moment where BROCKHAMPTON expertly fuses their distinct pop and rap styles to create something new and intoxicatingly memorable. Just the first line, “A million little pieces all add up to nothin' lately,” feels instantly relatable for anyone who has undergone confusing or conflicting situations, from a tumultuous relationship to dealing with the current state of the world. JOBA’s chorus approaches the sweet, candy-coated clarity of pop music while being broken up by smooth rapped verses that make the track multifaceted. The instrumentation varies in intensity from the sparse guitar in the intro to heavier sections that anticipate changes in the song. The track ends with an uplifting electric guitar part that plays behind the chorus and reframes it in a different light.

The album concludes with “THE LIGHT PT. II,” a track that calls back to the confessional “THE LIGHT.” The song continues JOBA and Abstract’s personal lyricism and emotion from the earlier track. The track begins with JOBA emotionally pleading with his father to “wait” and “screaming please don’t do it.” He later reflects on their close relationship in life and during JOBA’s childhood after poignantly asking, “When that hammer pulled back, did you think of me?” The raw emotion of the verses opens up something immensely personal for the listener, a clear view of pure catharsis. Abstract spends his verse reflecting on his childhood and his vulnerability, confessing, “Ever since I was a kid, I always felt so frightened” after mentioning his boyfriend and police brutality, fears brought on by his race and sexuality.

Although the album deals with complex and deeply personal emotions, it is not self-pitying or mired by sadness. The melancholy that permeates the album is laced with a sense of hope and a clear reminder that “The light is worth the wait.” “ROADRUNNER” expertly fuses two distinct genres to create an open and unified whole that is equally personal and universal, uplifting and cathartic.