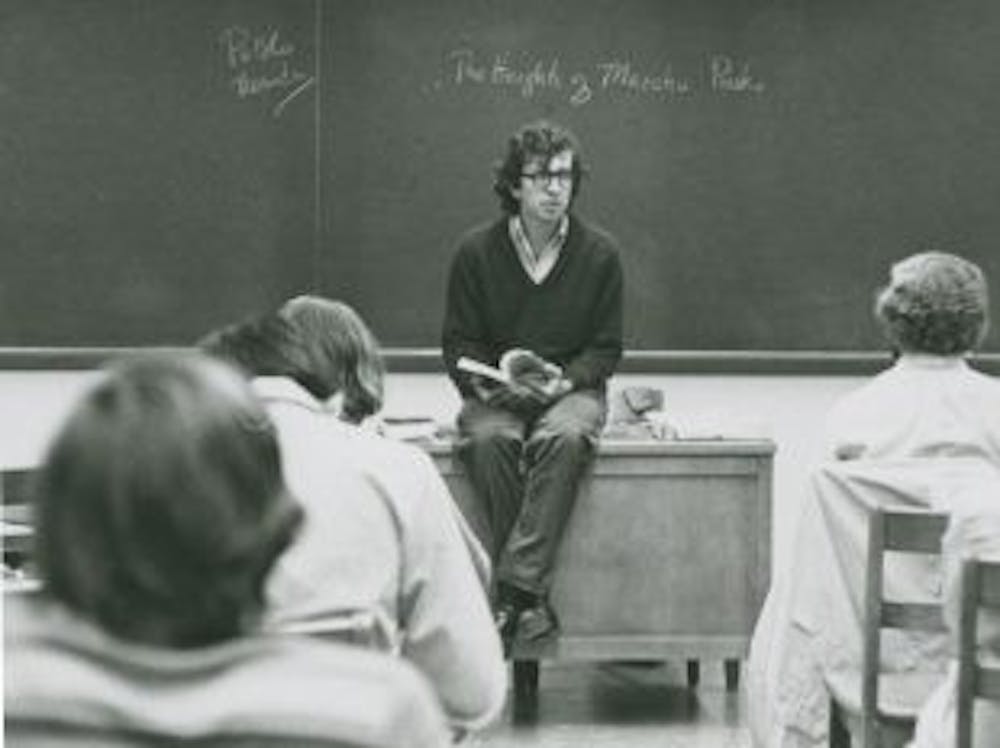 McMurtry received a master of arts in English at Rice in 1960. He taught at Texas Christian University but later moved back to Rice to teach freshman English and creative writing classes from 1963 to 1969. Terry Doody, professor emeritus of English, said he believes Rice had a great effect on McMurtry and changed his life.

“He certainly became a celebrity around Rice and in the neighborhood,” Doody said. “I never met anyone who didn’t like him or didn’t enjoy knowing him.”

President David Leebron said it was an honor to meet McMurtry in person when he gave a talk at Rice in 2009.

“I was struck by his humility, but even more so by his passion for books and literature, and his concern that books, the physical embodiment of human learning and compassion, were dying out,” Leebron said.

Leebron said McMurtry played a central role in putting Rice on the map as a place where greater writers taught future writers.

“McMurtry will live in our memories as a reminder of the role of literature in understanding both ourselves and the worlds of others, and how our shared experiences through books can help constitute our community,” Leebron said.

Eric Lueders (Wiess College ’67), who had McMurtry as an advisor for his senior thesis, said McMurtry’s books about Houston were popular on campus and were full of locations students could recognize.

“I knew he was on the faculty and I thought it would be cool to have him as an advisor on my senior thesis,” Lueders said. “My personal contact was limited to [thesis] sessions, where we discussed my thesis on John Barth, at the time an experimental novelist ... [McMurtry] didn’t like Barth because he couldn’t write a convincing female character, a special gift of McMurtry’s.”

Doody said he read a lot of McMurtry’s novels and used to teach one of his pieces in a freshman English class. McMurtry wrote over 30 novels and 30 screenplays and won a Pulitzer Prize for his novel, “Lonesome Dove,” in 1986.

“My favorite is probably ‘Duane’s Depressed,’ about a 62-year-old who parks his pickup truck and decides to walk,” Doody said. “[It is] a great book about a try at renewal at [age] 62. I want to think it may be a hidden autobiography.”

Carol Starr (Brown College ’67), whose freshman English class was taught by McMurtry, said one of the assignments in the class involving her research on Ernest Hemingway’s female characters stands out in her memory.

“This was about four years before the emergence of the women’s movement,” Starr said. “As I read about and compared Hemingway’s women characters to each other and to the male characters, I found them to be very superficial, lacking in complexity and depth. I remember talking with [McMurtry] about that and later thinking about how genuine, multi-dimensional and complex [McMurtry’s] women characters are … to this day, he is one of the few male writers who effectively respected and created authentic women characters.”

Don Des Jarlais (Baker College ’67) was also taught by McMurtry his freshman year, and said he feels extremely grateful to have been in that class.

“[McMurtry’s] depth of knowledge, his openness and engagement with students and his sense of humor made the class memorable. We had to write an essay every week, due on Monday, which also made the weekends memorable,” Des Jarlais said.

McMurtry eventually left Rice to focus on writing and opened up several bookstores. The largest is called Booked Up and is located in Archer City, Texas where McMurtry lived for much of his life.

Starr said when she visited McMurtry’s bookstores in Georgetown and Archer City over the years, McMurtry was always as happy to see her as she was to see him.

“He always shared some interesting books that he had turned up. His humility, sense of humor and interest in humanity and the human condition resulted in prolific literary contributions,” Starr said.

Martha Smith (Brown College ’66) said several of McMurtry’s books influenced her life and she has a shelf of many of his works.

“In 1970, reading his novel ‘Moving On’ helped several friends in DC do just that—move on! Two [of us] got divorced; I got pregnant,” Smith wrote in an email. “‘Lonesome Dove’ captured the spirit of my West Texas upbringing. McMurtry’s 1999 memoir, ‘Walter Benjamin at the Dairy Queen,’ is dear to this West Texan’s heart. I’m rereading it now.”

Des Jarlais currently works as a professor of epidemiology at New York University of Global Public Health and has published over 600 scientific papers.

“Ph.D. students and junior faculty have often asked me how I have been able to write so many scientific papers. I always reply that it was because I had a wonderful novelist for my freshman English professor,” Des Jarlais said. “[McMurtry] insisted that writing was a learned skill that came with constant practice. If one is to be a successful writer, then one should do writing almost every day.”

Des Jarlais said McMurtry contributed greatly to the sense of having fun at Rice.

“He often wore a T-shirt saying ‘Minor Regional Novelist’ to poke fun at the competitiveness of both the students and the faculty at Rice,” Des Jarlais said.

“[McMurtry’s] impact on the Rice community was that, even though he was to become a very famous writer, he was just a good guy to have around here,” Huston said. “He was modest, friendly, easy to talk to and a teacher who cared about his students.”

Starr said she was continually grateful to have been taught by McMurtry.

“He sparked a love for learning and literature that continues today,” Starr said.