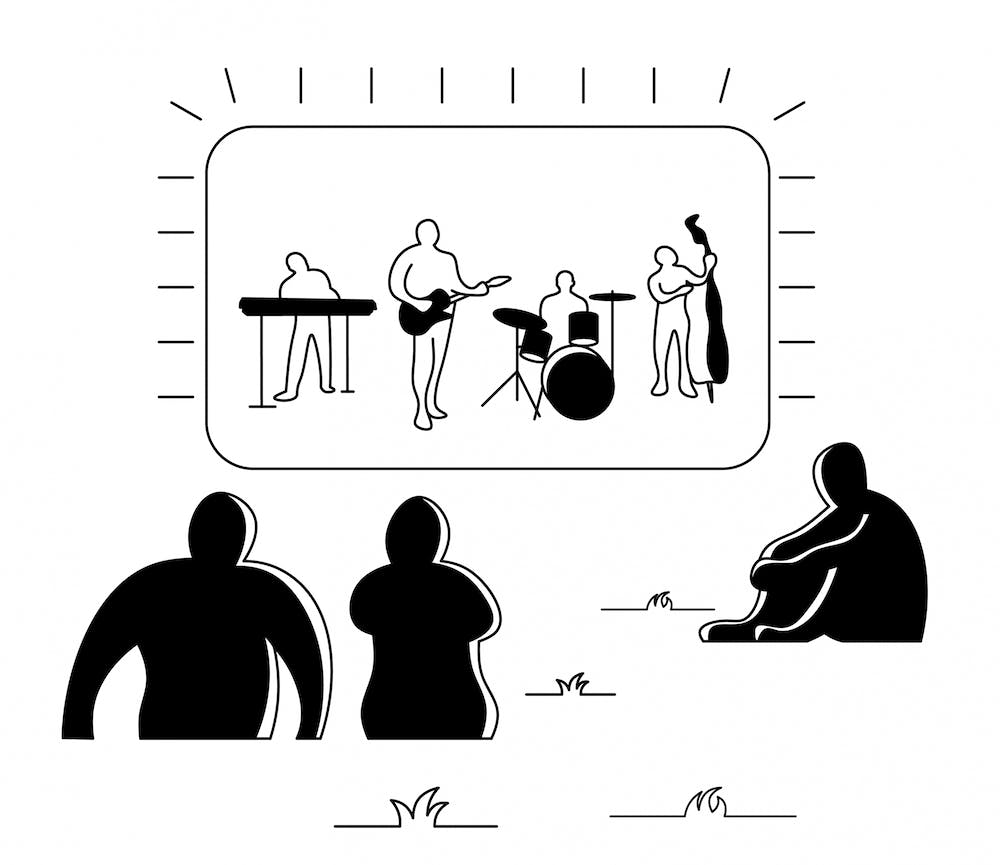 Landry, a Jones College junior, said that she started planning the event early due to the uncertainty that the ongoing COVID-19 pandemic presented, taking precautions to make sure that the event would be safe for everyone to attend.

“Like all of our events this year, it’s going to be really different from the past,” Landry said. “This is KTRU’s annual concert, our biggest concert of the year. It happens outdoors in the central quad.”

In comparison to other years, the hybrid format will allow for a larger possible audience for the show.

“Anyone in the world can watch [ODS],” Landry said. “If someone is a fan of an artist who’s performing but doesn’t necessarily know who KTRU is they’ll be able to watch. Getting more exposure beyond the Rice and Houston community who know about KTRU is really cool and exciting.”

The virtual format has also made it easier for artists outside of the area to attend. While co-headliner Dorian Electra is originally from Houston and other local artists are performing such as Sister, Gio Chamba and ATTXLA, other artists like co-headliner Raveena are performing from many different locations without having to worry about travel concerns.

“Our other acts are from all over,” Landry said. “They just got to stream from the comfort of their own home and bring it to Houston — Steel Blossoms from Nashville, Tiger Goods from Cincinnati, _thesmoothcat from Louisiana, FEA from San Antonio.”

While determining the lineup for ODS, Landry said that seeking out a diverse set of artists was a priority. She recommends that audience members follow artists on social media and listen to their music after the show to support them.

“When I was booking artists, I did intentionally seek out artists of color, non-binary artists and artists who are in the LGBTQ+ community,” Landry said. “I hope audience members can feel represented and assured and glad that we have diversity in that sense as well as geographical diversity.”

While a limited number of audience members — 65 people during each hour-long set — will be able to gather in person in the central quad, Landry said that all of the sets will be virtual.

“I took the safe route and was like, ‘We’re not going to have live performing artists performing at Rice in front of a crowd,’” Landry said. “Because that was too much liability that I didn’t want to deal with. I really didn’t want to risk people getting sick especially since these artists would [have been] flying in from other places.”

Landry said that there will be 10 artists pre-recording their own sets that will each be 40-45 minutes long. They will stream the sets online through KTRU social media channels, so the event will be accessible to anyone with internet access regardless of location. Rice community members can sign up for the times that they want to attend the event in-person.

This virtual format was key to inspiring the artwork used to advertise the event. Isabel Samperio, a Hanszen College senior, said that she kept the virtual format in mind while designing the graphics for ODS.

“Katelyn [Landry] and I met a few times to talk about our vision for a lot of the graphics for ODS this year, and one thing she mentioned to me was because the show is virtual [that she wanted the graphics] to have some reference to that,” Samperio said.

Creating the graphics was a different experience than working in other mediums, something Samperio sought to embrace with the design.“Whenever you’re working with a new type of media, you realize that there are certain things you can do in one that you can’t do in another,” Samperio said. “On [the ODS] poster, there’s different bunny and pineapple shapes that look gel-like or like water-like stickers, and there’s no way I would be able to paint something like that.”

Merchandise for this year’s ODS will be sold both at the in-person event and through an online store. For those attending the event in-person, there will be a live art installation by Houston-based artist Chandrika Metivier and the opportunity to get food from Houston food trucks. The food trucks have yet to be announced, but, according to Landry, they are aiming for two food trucks present with one providing vegetarian and vegan options.

“I wanted to make a mini music and art festival that people can go and enjoy safely,” Landry said.  “It won’t be the giant crowd that we all love about the show, but it’s something. I’m really hoping people enjoy it from their homes as well.”

After other successful events KTRU has hosted this semester, Landry said that she is optimistic about ODS. “I think the Cozy Show that went on in February was pretty successful even though we had technical difficulties,” Landry said. “I got together with my friends, and we watched it and had a good time. I’m hoping that’s what happens with this show.”

Landry said that she hopes people will tune in for the performances and potentially host COVID-safe watch parties. “As long as gatherings are happening safely, I like the idea [of the show] being on a laptop or on a TV at a certain point in the day and just having the music going in the background,” Landry said. “I know people are really excited for our headliners [Dorian Electra and Raveena], so I hope people will have their own little watch parties. All I really want is for people to watch and enjoy it.”

Samperio said that the most exciting thing about the upcoming event is that ODS is happening at all. “[ODS] is one of my favorite events at Rice each year, and the line-up is super fun this year,” Samperio said. “I’m just excited to have an event that has an in-person event that brings people together. I’m a senior, so to get [an in-person experience for ODS] before I leave is really great.”

After this year, Landry said that she hopes students will be encouraged to attend future events and appreciate KTRU after they return to something more normal after the difficulties they have faced. “I hope that [the Rice community] enjoys it and has a good time,” Landry said. “But I also hope that they remember this and are willing to come out next year when we’re back. I hope that the Rice community will take note of and appreciate KTRU.”