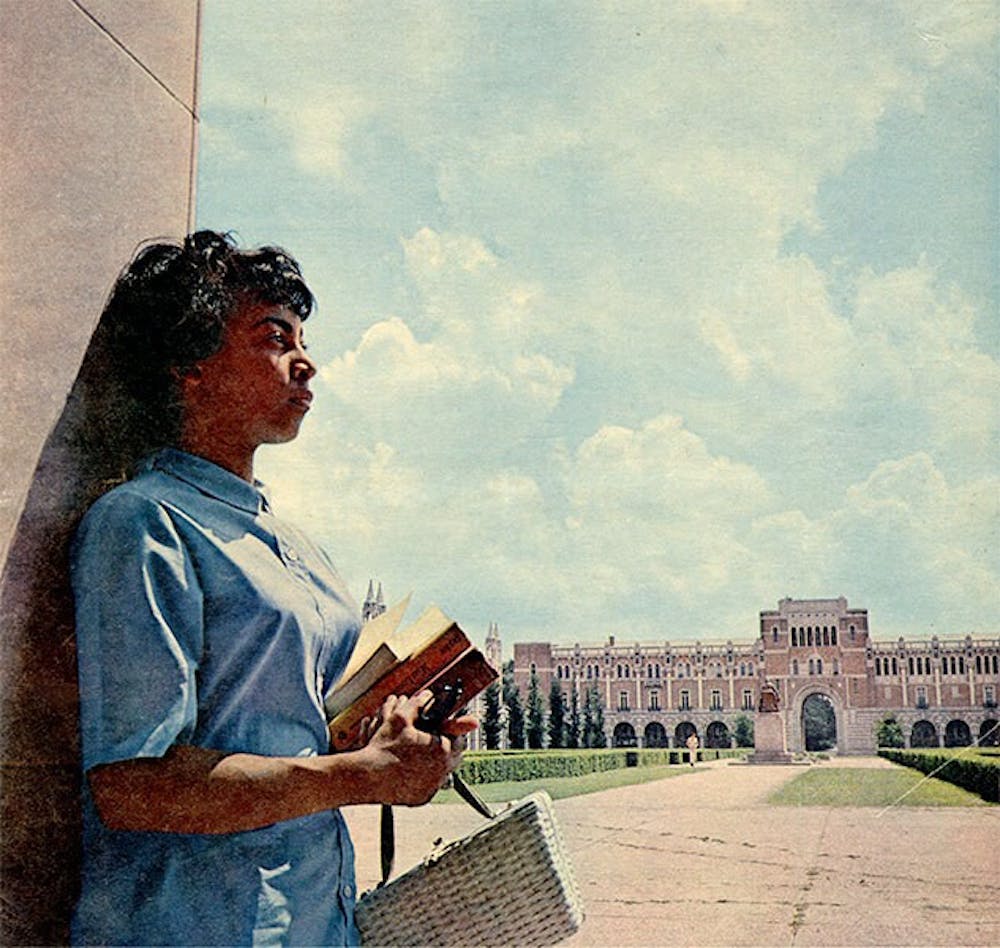 A photo of Jacqueline McCauley, Rice University’s first Black woman student. The photograph is one of the many documents discussed in Doc Talks, the webinar series run by the Task Force on Slavery, Segregation and Racial Injustice. Photo courtesy Alexander X. Byrd

Fifty-six years ago, just as Rice University began to desegregate, student Raymond L. Johnson wrote a remarkable letter to the university’s president. Johnson was the first Black student to enroll at Rice, and his presence sparked a lawsuit by alumni demanding that Rice only educate white students. School officials requested that Johnson and other Black students keep a low profile and stay out of the media during the lawsuit, but Johnson’s letter to the president brought the painfully slow progress of integration under light — and questioned the dubious timing of introducing tuition the same year Rice began accepting Black students. This letter is just one of many documents discussed in The Task Force on Slavery, Segregation and Racial Injustice’s new podcast and webinar series.

History professors Alexander X. Byrd and Caleb McDaniel, who co-chair the Task Force on Slavery, Segregation and Racial Injustice, host a weekly webinar for the task force where they take on some of the unsavory aspects of Rice’s history. That webinar series — and the adapted podcast episodes that are published after each lecture — is called Doc Talks. Byrd and McDaniel created the series last fall to share the task force’s research with the Rice community.

The conversations on Doc Talks are driven by a close examination of historical documents uncovered from all around Houston, including documents from the Woodson Research Center, books from Fondren Library stacks, Rice Thresher archives and local newspaper articles. Byrd and McDaniel are joined by other historians at Rice, including undergraduate researchers, alumni and special guests.

"The specific goal of this project was to invite people into the research process and give them a glimpse of how historians work and think about documents from the past,” McDaniel said. “The goal each time is to talk about what draws us to these particular documents, what makes them important for the work we're doing … what questions they raise, as well as what questions they can help us to answer.”

Vital to the success of Doc Talks is the participation and engagement of its audience. The series’s creators see the students and community members who share and ask questions as some of the most important drivers of the conversation.

Beginning with the first episode, listeners are confronted with details of a mortgage deed directly connecting William Marsh Rice’s fortune to slavery. Discussion of the unsettling document is accompanied by a conversation about a striking photograph of Jacqueline McCauley, Rice University’s first Black woman student, that highlights the experiences of the first Black students at Rice.

In the third episode of Doc Talks, Letters to Presidents, McDaniel opened the episode by discussing William Marsh Rice’s letter to U.S. President Andrew Johnson. Later in the episode, Byrd introduced the letter written by Johnson, the first Black student at Rice, to university president Kenneth Pitzer. Byrd and McDaniel’s discussion during the episode sought to bridge the 100-year difference between when the letters were written. Rice’s letter opens questions about his allegiance during the Civil War and the way he viewed the people he enslaved. Johnson’s 1965 letter shed light on his own experiences and made the case for immediate desegregation on campus.

While discussing Johnson’s message to Rice’s president, Byrd puzzled over a missing aspect of the letter. During the following webinar, Johnson — who is now 77 years old — joined the webinar and answered some of Byrd’s questions from the last episode in the participants’ chat.

Kate Coley, Rice’s associate director of alumni relations, serves as Doc Talks’ producer. For her, the series is integral to connecting the dots between the fact that William Marsh Rice enslaved people and the more recent racist history at Rice.

“It’s important to not just understand who William Marsh Rice was and that he owned slaves, but also how that affected desegregation, how it affected the Black students' experience on Rice’s campus,” Coley said.

"It's always rewarding talking to the two of them. They are so passionate and so invested in this work and when you talk to them you can tell, it's so tangible,” Coley said. “My favorite part about them is that they are friends. They're colleagues, and they have this history, but deep down there's this real friendship which I think makes this extra special."

Prior to recording an episode, Byrd and McDaniel each choose documents they want to discuss. During the webinar, they explore the other’s documents for the first time in front of a live audience. Byrd said that he enjoys getting to demonstrate what it’s like to be a historian.

"What I appreciate most about the Doc Talks … is to sit down with a colleague and to be able to work through the types of things historians do in real-time," Byrd said.

Initially, Byrd and McDaniel said they thought that their research for the task force would take them to a great number of places. Due to COVID-19, they were unable to travel to and investigate many of the important physical locations in Rice’s history of racial injustice. But as it turned out, the two said that archives physically closing offered them opportunities that they may not have had before. COVID-19 ushered in a new wave of archival digitization, the professors said, which allowed them to develop search tools to identify key pieces of evidence.

In addition to Byrd, McDaniel and Coley, a team of Rice undergraduate and graduate students contribute to the podcast behind the scenes, working as media fellows and researchers, and providing an active audience.

The webinar also discusses work being done across campus, such as The Racial Geography Project, a new student research collective that investigates racism and violence across campus. In the sixth episode, three undergraduate students present their research into important documents about a pageant, parade and photograph. Current students Morgan Seay, Sumin Hwang and Anthony Nguyen discuss their research into an article discussing Rice student participation in a Confederate rally, a 1921 reenactment of “Texas, a Democratic Ode” and a photo of students wearing Ku Klux Klan garb in the yearbook. The episode discusses the student’s evidence and reckons with some of the disturbing behavior and attitudes of past Rice student organizations.

Doc Talks’ creators say that they have plans to continue the webinars and podcasts into upcoming school years. They said they hope that as the show progresses, the greater community gets more involved and engaged.

"Especially when Rice students are presenting, I wish we could engage a large swath of the community so that the student researchers that are attached to the work of the Task Force ... that their very engaging and difficult and illuminating research could be seen and appreciated by a larger number of their peers,” Byrd said.