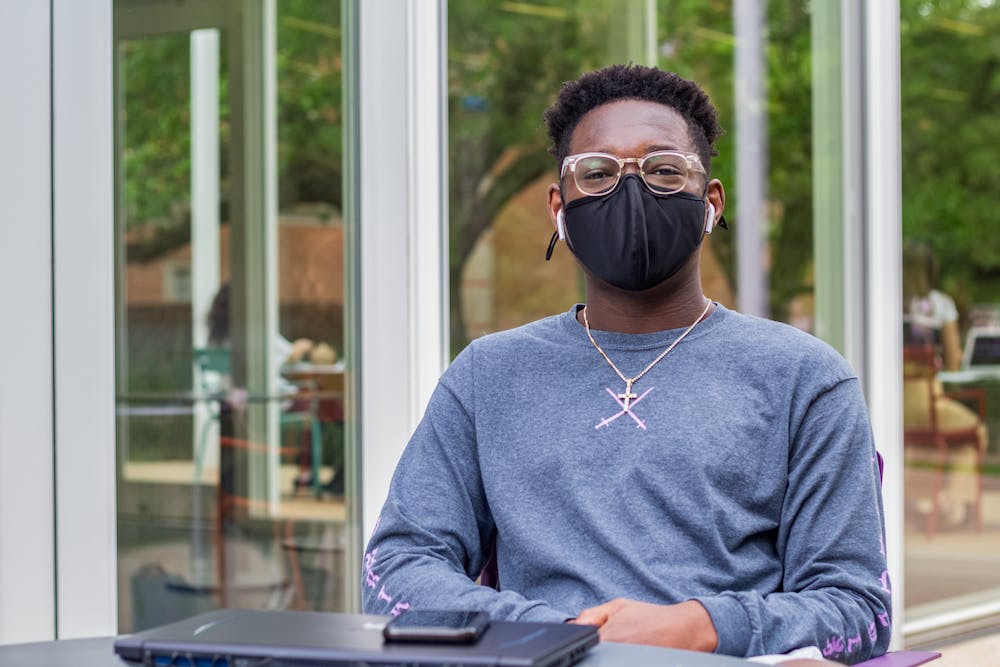 When Edesiri Mushale was in high school, he thought he wanted to be a doctor.

“My mom is a nurse and I really liked helping people,” Mushale, a McMurtry College senior, said. “I didn’t really realize how long the process [of becoming a doctor] was going to be.”

However, his experiences on various robotics teams led him to change his interests. Mushale first joined the robotics team in the seventh grade; in high school, he continued with the activity and joined a larger team.

“We were basically doing stuff that engineers would do in the real world. I was like, ‘This is so cool. I probably want to do this for a career,’” Mushale said. “I [initially] wanted to combine the two and do bioengineering, but I chose mechanical engineering because I knew that I could do pretty much anything with that major. I could go anywhere. I could go into the biomedical side, I could go into oil and gas.”

As an engineering student in his senior year, Mushale is working on his senior design project. The project has played a big role in rekindling his love for engineering, Mushale said.

“My senior design project has reignited my passion for engineering and solving problems in a team,” Mushale said. “The overall scope is creating a really efficient underwater vehicle that is using a concept similar to what a fish does underwater, where it stores a pocket of gas inside that it can either release or intake to change its buoyancy in the water.”

That concept will be applied to a robot, Mushale explained. The design project will involve driving a small robot into water and testing out its capabilities.

“We are driving a small robot into water with thrusters. We are going to turn the thrusters off and turn on fuel cells which use electrolysis to create air from water,” Mushale said. “Creating that small amount of air will change the volume and the buoyancy of the robot, which means it can float at specific depths depending on whatever we calculate.”

Mushale has also been able to take his passion for robotics outside of the classroom. Rice had a partnership where they would pay Rice engineering students to go to a high school, help students build a robot, and compete in engineering competitions. Mushale’s experience with the robotics team in middle and high school allowed him to help other students with similar interests.

“There was an opportunity where I could go back and mentor a robotics team in this area. I went to a school in Third Ward, Jack Yates High School, and they have a robotics program there. That was really fulfilling for me,” Mushale said. “I still remembered a lot of what I did in high school and I was able to apply my knowledge from my engineering classes to help them compete in a competition. I think that was a completion of what I’ve learned from high school plus what I’m learning in college, to be able to give that knowledge back to students.”

Mushale’s dream job, he said, would draw upon his mechanical engineering knowledge. He learned about it through a visit to the headquarters of Intuitive Surgical, a corporation well known for its Da Vinci robots, which are used for surgical procedures that are more challenging for humans.

“Back in high school, I got to visit their headquarters and got to mess around with their robots. That’s kind of what initially [made me say] ‘I want to do this.’ I would really love to work with those robots, whether it’s in the manufacturing side or it’s in research and development. That would be super amazing,” Mushale said.

Aside from engineering, Mushale said he is passionate about people. Mushale said that, when interacting with people, he enjoys connecting with them and taking away something new from those interactions. As Vice President of the Rice African Student Association, Mushale is able to channel this passion into the activities he organizes for the organization. He said RASA is a big part of his identity and that it gives him a lot of joy to just connect with other members.

“RASA has given me a space where I can learn a lot more about what’s going in Nigeria or Africa. It gives me perspective on where I come from,” Mushale said. “I learned a lot about the continent of Africa and how it’s so different. RASA has been key to me learning more and allowing me to connect with [similar] people.”

In addition to serving as director of leadership development for RASA, Mushale also reaches out to alumni and helps organize career panels.

“We host a couple of events with alumni. They speak about their experiences at Rice and what they’ve learned,” Mushale said. “A lot of our members reacted positively to that; it’s a cool space for people to reach out and connect.”

Mushale said that, in general, members of the Black community at Rice are close to each other. He feels that they are truly able to understand and relate to each other, he said.

“The Black community as a whole is really tight-knit. We talk about what we want to talk about. Whatever we put out there, other people will understand,” Mushale said.

Mushale said, however, that he sometimes feels that it is hard to relate to other Rice students.

“I think it’s just the fact that there’s not a lot of us [Black students] on campus that’s the biggest factor to me,” Mushale said. “Looking at my classes and seeing only one or two other people like me or have had the same experiences as me, that kind of sucks. You can’t relate to other people directly.”

However, overall, Mushale’s experience at Rice has been quite positive, he said. He feels that he has not been detrimentally affected by those experiences on campus.

“Personally, I don’t think I felt extremely alienated or negatively affected. In general, I feel supported,” Mushale said. “Rice does pour a lot into advertising and supporting the culture clubs like RASA. However, I do think [there should be more] communication between [Black students] and Rice. Rice just needs to listen to the students in general.”

Having been an advisor and coordinator of Orientation Week in his sophomore and junior year, respectively, Mushale has done a lot of listening to students and fostering community himself. As a member of the Rice Emerging Scholar Program, he was able to stay on campus the summer before his freshman year and take classes. In addition, he was able to meet the coordinators for that year which inspired him to get involved with O-Week.

“I met the [coordinators] during that summer and I really loved my coordinators that year. I really wanted to do what they did,” Mushale said. “I became an advisor my sophomore year. I really enjoyed connecting with my O-Week group. My junior year, I became a coordinator. That was a whole experience. I learned a ton about working in a team, about having teammates and friends, how to work with them.”

Mushale is eager to continue connecting with other people in his last few months at Rice and beyond, whether through talking or simply sharing a laugh.

“I want to create spaces where other people can learn about themselves,” Mushale said. “Everyone’s different in this world and it’s cool to learn about their life experiences.”