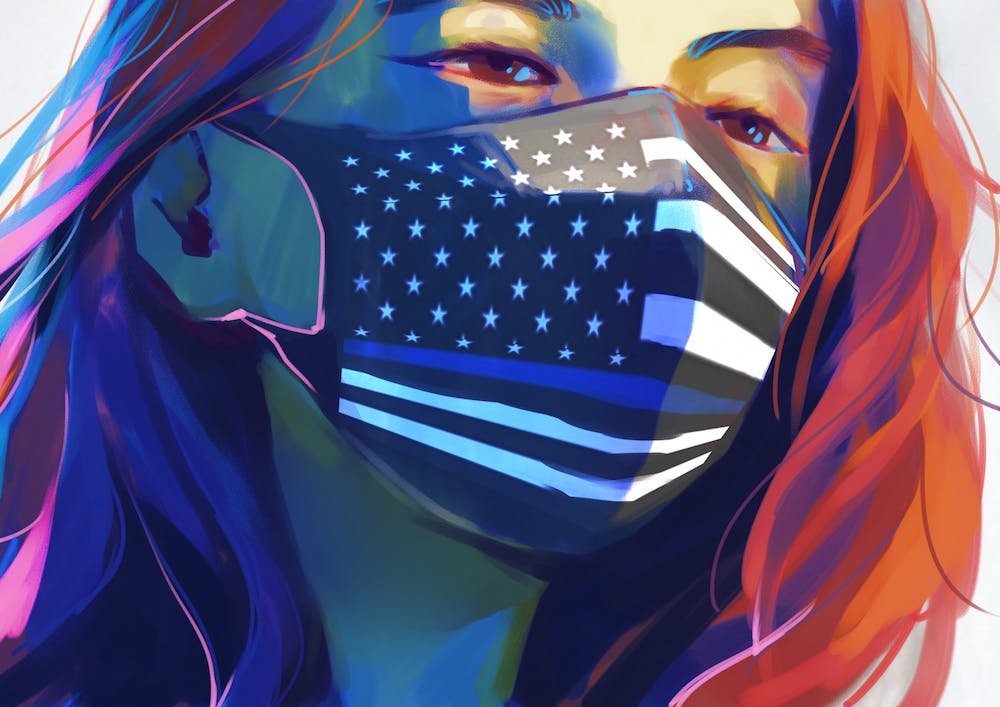 In the past two weeks, students reported seeing Rice University Police Department officers wearing face masks depicting the “Thin Blue Line” symbol on campus, a symbol sometimes associated with the Blue Lives Matter movement and which some students associate with the movement. RUPD Chief Clemente Rodriguez said that he had not seen any officers wearing masks with the words “Blue Lives Matter” written on them, and none of the RUPD supervisors he spoke with saw any RUPD officers wearing masks with messages saying the words “Blue Lives Matter.” However, some officers have worn masks depicting the “Thin Blue Line” symbol, which Rodriguez said was meant to support fellow law enforcement officers.

“[The “Thin Blue Line” symbol] is intended to support fellow law enforcement officers and remember officers who have lost their lives in the line of duty,” Rodriguez said.

Students who saw officers wearing masks that depicted the “Thin Blue Line” symbol said that the symbol represented the Blue Lives Matter movement to them. Riley Barker, a Hanszen College freshman, said that the officer he saw was wearing a mask with the “Thin Blue Line” symbol on it, but described it as a Blue Lives Matter mask.

Barker said that he had heard stories of other RUPD officers wearing masks with the “Thin Blue Line” symbol on it, but he had never seen it in person until he saw the officer last Friday, and was shocked to see it in person.

“I’m sure, if there have been other interactions on campus with this officer, or any officers wearing this symbol, that’s uncomfortable, at the very least, and at the most that’s something that makes you feel uneasy,” Barker said.

Barker said that he was surprised to see the officer wearing a mask with the “Thin Blue Line” symbol on it.

“I have to imagine, if I was not a white man, if I were a Black student, or Brown student, and I had the same interaction, knowing the experiences I’ve been told from friends, I feel like I would have felt unsafe,” Barker said.

Martel College sophomore Malaika Bergner said that she saw an officer wearing a mask depicting the “Thin Blue Line” symbol while rehearsing in a group for Africayé, Rice African Student Association’s annual cultural show, outside of the Moody Center for the Arts.

“I can’t speak for other students, but I could see people’s faces when he walked over to us at Moody, and people were very surprised and uncomfortable. And yeah, it was not a comfortable or safe environment for Black students to be in, I don’t think,” Bergner said.

According to Bergner, the officer approached the group and asked about a vehicle that was parked illegally in front of the Moody Center. The group said that the vehicle did not belong to any of them, and then the officer left. Bergner said she was surprised to see the officer wearing the mask.

“A lot of us were able to see that he was wearing a mask that had the Blue Lives Matter flag on it, very clearly,” Bergner said. “A lot of us were very surprised, and taken aback that [it] would be something that an RUPD officer would wear on campus, walking up to a bunch of Black students. And he didn’t even seem to think that would be a problem.”

According to Rodriguez, RUPD has a policy prohibiting speech that “express[es] bias against any race, religion, sexual orientation or protected class of individuals.” The policy applies to any item worn on duty by officers, including masks. Additionally, the department has a policy prohibiting officers who are on duty or in uniform from actively participating in political campaigns, according to Rodriguez.