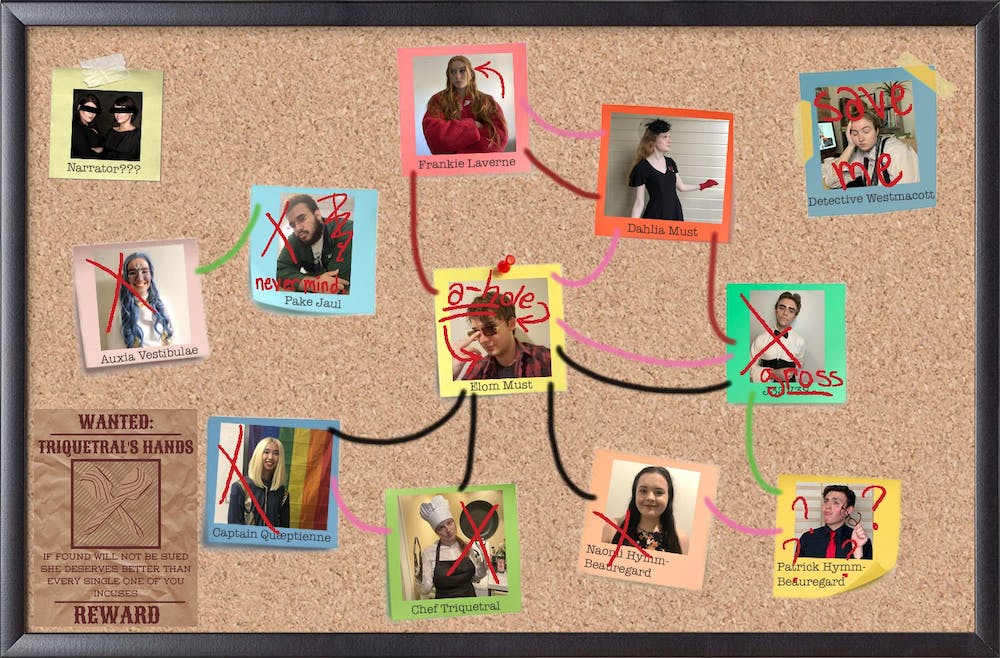 Nafisa Istami wanted to put on a play with members of Rice’s theater community, and she knew exactly what she had in mind: a murder mystery set in space, with audience interaction that dictated the ending. Despite being planned as a traditional play in Sid Richardson College’s new building’s theater space, the final product, “Space Axed,” is a live radio play by Sid Rich Theatre that met all of Istami’s expectations and more.

Set aboard a spaceship on its maiden voyage, the play’s inciting incident is the murder of the ship’s pioneering innovator, Elom Must (Adrian Almy), who was despised by plenty of those on board. Detective Westmacott (Maddie Bell) questions the passengers and crew, notably Dahlia Must (Elise Gibney), Elom’s wife who’s grown apart from him with time; Frankie Laverne (Maddie Peacock), fashionista and Must’s former business partner and later rival; Auxia Vestibulae (McKenna Tanner), an alien diplomat perpetually drunk on water; Pake Jaul (Shifa Rahman), an enthusiastic vlogger always on the search for novel content; and J33V3S, pronounced jee-threeves (Cole Thompson), Elom’s artificially intelligent stress-reliever.

Many actors chose the names for their characters, leading to neat parodies. Some names were effective ways of clueing the audience in to their character’s personality — if not through anagram, then through homophones like the loveable yet unwitting Patrick Hymm-Beauregard. Toward the end of the play, those viewing live could vote for whom they thought was the murderer among three suspects, dictating the ending from there. Each of the two performances had a different ending due to this.

This sort of play, where any of the characters could have motive to murder the deceased, is reminiscent of Agatha Christie’s “Murder on the Orient Express” — also set on a confined mass transit journey — and the 2019 mystery film “Knives Out.” Christie is mentioned in the play’s dialogue for her novel’s parallels to the events on the spaceship, and Istami, the producer, cited “Knives Out” as an inspiration.

The defining feature of Sid Rich Theatre’s “Space Axed,” though, is the collaborative nature with which it was developed. Tanner, one of the writers, used the term ‘devised theatre’ to describe how the play was written with collective input from actors and the production team. Tanner, a Hanszen College freshman, said the production was first put into motion in October and November, with character development and improvised rehearsals in December and January.

“We sat down to do the outline, and we were just going … ‘This is kind of weird, but we should go for it anyway because, why not?’” Tanner said. “And [we did] the same thing writing the scenes … ‘Is it strange? Yes, but it's also really, really, fun,’ so we just added in whatever we could and it resulted in a very chaotic but also very entertaining show.”

Auditions were held over Thanksgiving break, before a script was finished — with only a couple of traits and a scenario assigned to each character, actors improvised scenes according to loose instructions. Much of the finalized script came from lines said during improvisation, resulting in characters representative of what the actors wanted to mold them into.

“Frankie Laverne was a character very much developed by the actress, coming up with … just her whole demeanor,” Elise Gibney, one of the writers, said. “A lot of her lines are things that Maddie [Peacock] said in the rehearsal. A large section of the script is just things that the actors said, and we had on Zoom recordings, and stuck in word for word.”

Istami, a Sid Rich senior, said part of the original intention of the show was to make use of the new Sid Rich building, which opened as a residence this January and includes a theater space. Istami said the theater space wasn’t finished till mid-February, just over a month before “Space Axed” premiered, and it’d be unideal to buy audiovisual equipment for the new building before the coming fall semester. Because of this, it wasn’t feasible to rehearse or perform in the new building, and in early February, the production team decided to adapt “Space Axed” into a radio play.

“We were like, ‘How do we change [the script] to include some of these stage directions that ordinarily would just be showcased through movement of the characters, and how do we incorporate setting, when this is audio-only and we don't have a set to actually work with?’” Istami said. “That ended up being Katie [Wall], who is one of our wonderful writers, [as] the narrator [who sets] the stage for the audience.”

The play can be enjoyed entirely aurally, but new, visual aspects were added after the shift to an online medium. Co-Director Bria Weisz designed an image with photographs of the characters tacked to the detective’s bulletin board to serve as a background during the YouTube stream. Over the course of the play, the board was updated to show the detective’s notes in marker as she learns more about the suspects. This ever-visible background was an immense aid in keeping track of the characters’ relationships, the spellings of their names, and whether they’re human or an alien species.

Istami said she went thrifting with costume designer Akaya Chambers for some of the cast’s costumes; others were bought online or came from the actors’ own wardrobes. These costumes were for the publicity images, including the stream background, but also for video advertisements within the story.

“We [thought it would be] hilarious if we recorded ads from our characters to intersperse throughout this radio show,” Istami said. “As you would normally hear on a podcast, somebody's going to sponsor some content. So we're like, ‘Of course, Pake Jaul is going to be selling his merch in the middle of this show.’”

The March 19 performance of “Space Axed” is viewable on the Sid Rich Theatre YouTube channel, as is the March 20 performance with an alternate ending.