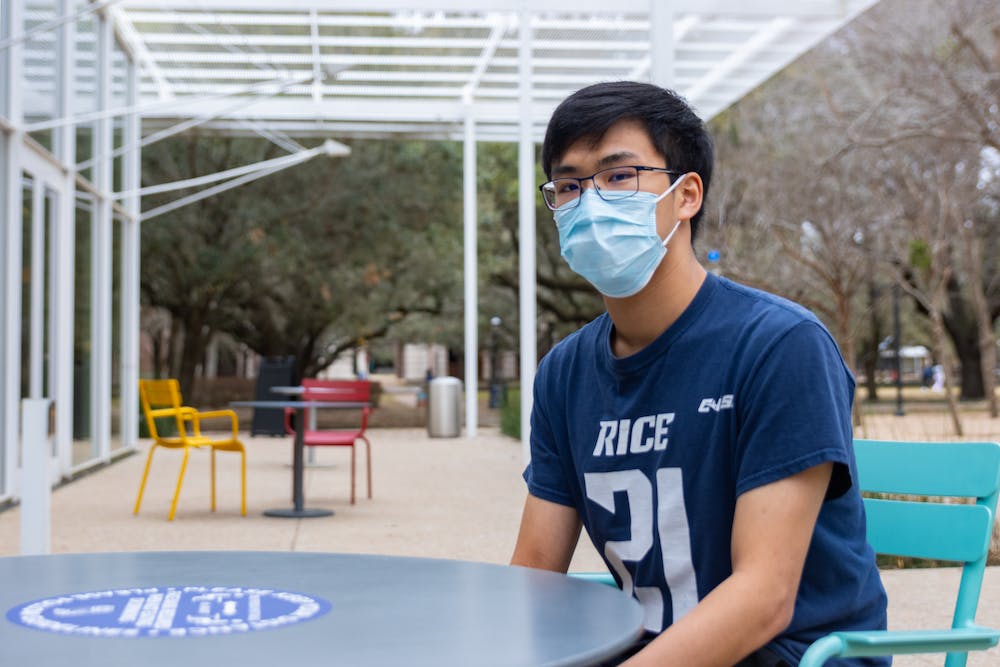 Cory Pan first learned about Rice while accessing a textbook through OpenStax — a free textbook resource based at Rice — for a high school class. Now, the Baker College senior is preparing to graduate from Rice with a degree in bioengineering, and said he is ready to “go wherever the wind blows.” (Channing Wang/Thresher)

Though his journey as a bioengineering major has since become central to his experience at Rice, Cory Pan’s first experience in bioengineering almost pushed him out of the major. While working on a problem-based learning project, Pan was part of a team that was charged with coming up with a design concept for a device that would measure renal function and notify a patient if they needed emergency dialysis.

“At the time, I did not know how to deal with open-ended questions,” Pan, a Baker College senior, said. “And the really important thing about PBL is that the prompt and the topic are very vague on purpose.”

As a high schooler in his hometown of Palo Alto, California, Pan had been very science-minded, but originally gravitated to more theoretical sciences. One day in his junior year, he discovered Rice while looking for study resources online.

“I actually found out about Rice through OpenStax … the free textbook resource,” Pan said. “[I was] just casually looking for practice question stuff with my high school coursework. I found that website and it was really neat; I was impressed by the fact that it [provided] full-scale college textbooks … and it was also for free, which is amazing. I saw the Rice logo on there, and that sort of drove me to look for what Rice is.”

After matriculating at Rice in the fall of 2017, Pan felt his academic interests start to shift.

“In high school, I was more interested in just pure science, such as chemistry, physics, things like that,” Pan said. “But when I came to Rice, I started gaining an appreciation for being able to apply that knowledge to practical uses, which is why I started looking more at engineering topics.”

According to Pan, the open-ended projects that come with the bioengineering major presented him with a level of intellectual uncertainty that both challenged and excited him. After struggling through his PBL project in sophomore year and briefly considering switching to a more theoretical science major, Pan realized the value in the uncertainty that underscored the bioengineering curriculum.

“I realized that the reason I’d wanted to go back to more theoretical, dogmatic fields to study was that I appreciate certainty very, very strongly,” Pan said. “[But I realized] that there are very few scenarios in the world where you have a binary. And so I realized [being comfortable with uncertainty] is a very important concept to understand.”

Another aspect of the bioengineering world Pan has come to love is the supportive community within the major.

“One of the reasons some people stick to bioengineering is that there’s a huge sense of ‘we’re in this together, we’re working together,’” Pan said. “That manifests in late-night problem set Zooms and, before COVID, being able to get together in person to work through problem sets but also [sending] memes and complain[ing] about life.”

Pan’s time as a bioengineering major has taught him other valuable life lessons as well.

“Something that I realized pretty late in life is that there is a distinct difference between school learning and performance,” Pan said. “It’s a pretty important concept, but I didn’t really get to learn [it until] maybe a couple of weeks [ago].”

Outside the classroom, Pan serves as one of Baker’s public health ambassadors, providing education about COVID public health measures and exemplifying safe living. However, he says that Rice students have made his job easy by taking responsible COVID safety measures,

“If I’m being honest, Rice students are great. I haven’t had to do much in terms of being an example,” Pan said.

Alongside other public health ambassadors, Pan said he helped advocate for the mandatory flu vaccine this year and helps serve as a resource in ways big and small.

“Some of the things I’ve done is leading by example, masking [and] trying to keep distance while maintaining a sense of community and culture,” Pan said. “[As well as] restocking cleaning supplies and some of the smaller things.”

Looking ahead, Pan said he hopes to work in a translational or clinical research setting after graduation and eventually plans on attending medical school. As he figures out what will come next for him, Pan’s newfound comfort with uncertainty has come in handy.