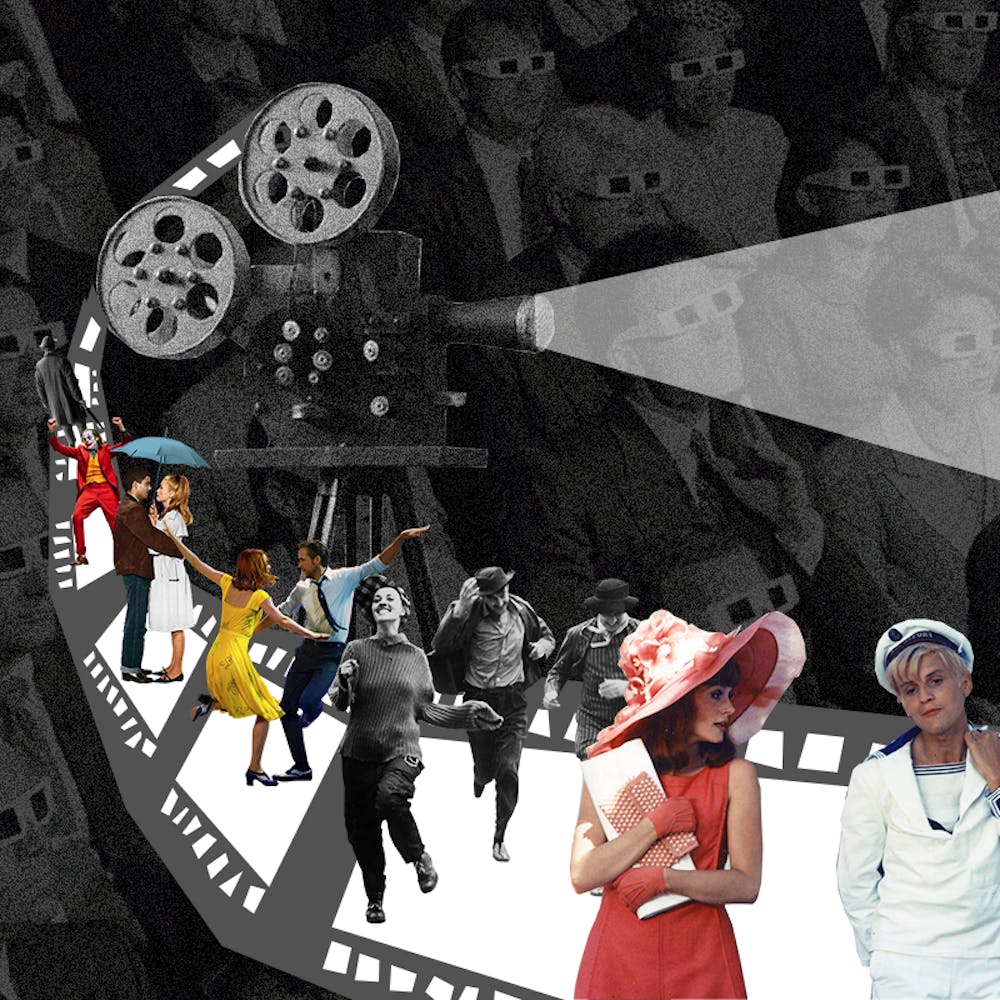 It’s been about a year since COVID-19 turned our lives upside down. And national reckonings in different spheres have shaped the months following the beginning of quarantine. In these strange times, watching on-screen content has been a quintessential activity for many — not just students. The Rice Thresher asked professors from different disciplines to share the films or series that have been keeping them entertained, encouraged or engaged.

“Because I teach movies, I watch a lot of them. During the pandemic, I have suspended a basic rule: never watch a movie again unless you are teaching it or programming it, etc. So, I have been watching a lot of films I have already seen. One I have watched is ‘24 Hour Party People’ (2002) directed by Michael Winterbottom and starring Steve Coogan. It is about the creation of the Manchester music scene, Factory Records and the club called ‘The Hacienda’ in the 1980s.  It’s a lot of fun, has a lot of humor and reminds of a time of gatherings.”

“These have been a difficult 12 months for film lovers. I run Rice Cinema and I miss hosting films and going to see them in theaters so much. I deeply miss getting together not just for films, but for collective experiences of any sort, like we all do. Humans are social creatures, we [are] not designed to spend so much time in solitude.

One show that I particularly looked forward to dropping and tuning into each week as new episodes came out was the ‘Small Axe’ series created and directed by Sir Steven Rodney McQueen (not the well-known American actor Steve McQueen). The ‘Small Axe’ limited series is really more a collection of stand-alone films centered around the theme [of] the lives of Caribbean immigrants in London during the 1960s to the 1980s. I recommend the entire five-episode series, but would particularly suggest checking out episode two, ‘Lover’s Rock.’ It takes place over the course of a single house party and is wall-to-wall full of excellent music, dancing, food and good times captured by nimble and seductive camera and editing work. The very intimate nature of this one-night story is able also to draw attention to social issues of isolation from mainstream British society [and] class, as well as gender and racial violence. These political messages will not diminish your viewing pleasure as you fall into a time capsule of these period-specific sound system dance parties. The scenes shot on the dance floor itself really soothed my pandemic-induced solitude in a way nothing else has and I’ve returned to this episode a few times. But you don't have to take my word for it: ‘Lover’s Rock’ made Barack Obama’s list of top films for 2020 — not TV shows, films. The excellent soundtrack alone is worth the price of admission, which in this case is free because the entire series is available on Amazon Prime.”

DAVID ALEXANDER, physics and astronomy professor and director of the Rice Space Institute

“My favorite series that I rewatched over the course of the last several months was ‘The Expanse,’ a space saga on Amazon Prime. I like it because it has a bit of drama, some cool realistic science and really great characters. Where it resonates with the past 12 months is that it highlights both the disparity that can exist in society but also the common humanity when faced by a common danger. There is the dangerous alien virus called the protomolecule that gets weaponized by an unscrupulous businessman in cahoots with a corrupt government official [and] that causes death and destruction but also opens up new opportunities. Classic sci-fi in some sense but with a strong focus on the human aspects, and it does try hard to get the space facts right, which I appreciate. Other than that, I watched mostly soccer (I am not counting ‘The Mandalorian’).”

“‘Just Mercy’ was a film that resonated with me. It reminded me of how challenging it is at times for certain people to receive justice. It was comforting to see someone in a privileged position that was willing to fight for someone less privileged.”

“The first film that comes to mind is ‘Judas and the Black Messiah,’ a movie about the betrayal that led to the murder of the Black Panther Party leader Fred Hampton in 1969. Watching this film after the numerous events of racial violence of the last few years was just a reminder of the historic dimension of systemic racism in this country. More importantly, it was a reminder of the complicity of the State in some crimes against African Americans. After finishing the film I thought: ‘Yeah, State Terror can breed more than one Judas …’

Another great film hit close to home: ‘Once Upon A Time in Venezuela,’ by Anabel Rodríguez Ríos. This is the story of two female leaders struggling for survival in a deeply polarized society. The story develops in a surreal setting: the Venezuelan village of Congo Mirador, a town floating on stilts, just inches above Lake Maracaibo.

‘Midsommar,’ [directed] by Ari Aster, blew my mind. This strange, folk horror film from Sweden, is a dark tale set mostly in the bright sunlight. Beyond the strange, surreal, B-Movie feel, there is a whole reflection about sex, tribalism and rituals that I found fascinating.

‘Mucho Mucho Amor: The Legend of Walter Mercado,’ a documentary about Puerto Rican astrologer Walter Mercado, turned out to be a deeply human exploration of race, gender and sexuality, along with wild kitsch …”

“I just taught my favorite film in these times and in all times. It is Kinugasa Teinosuke's 1926 ‘A Page of Madness’ (狂った一頁). I teach this film in HIST 218. It is an experimental mood film about madness. A janitor in an insane asylum tries to reconnect with his helplessly insane wife. Their daughter wants to get married but she is afraid her husband will find out that her mom is crazy. No one totally understands what the plot is because it is experimental and is shot from the point of view of sane and crazy people. Kind of like our reality right now!”

“Two movies that have kept my spirits up in this last year are ‘First Cow,’ from last year, and ‘The Leopard’ from 1963. The first is about two people trying to adapt to a difficult new world (the Oregon Territory), and the second is about a man letting go of one (the Kingdom of the Two Sicilies). Neither rely on cynicism as a response to the disappointments and difficulties of history, and both transport one, at least for a little while, to another place.”

RICHARD JOHNSON, sociology professor, civil and environmental engineering lecturer and director of the Administrative Center for Sustainability and Energy Management

“The first film I watched at the beginning of the lockdown was Ingmar Bergman’s classic, ‘The Seventh Seal,’ in which the protagonist tempts death during the time of the plague. I had just celebrated a milestone birthday, and pondering aging, death and the meaning of life during a pandemic made this one a soul-rattling choice, albeit one that was simultaneously serious and witty. Also particularly relevant for the current moment were Ava DuVernay’s documentary, ‘13th,’ and the film adaptation of Bryan Stevenson’s book, ‘Just Mercy,’ both of which examine race in America. Stevenson has a quote that really resonates with me: ‘Each of us is more than the worst thing we’ve ever done.’ What a powerful statement!

These days I rarely watch a movie more than once, but an exception for the past 30 years that I returned to once again during the pandemic was ‘Paris, Texas’ by Wim Wenders, which is cinematically one of the most beautiful films I’ve ever seen. It’s like watching a 2-1/2 hour Edward Hopper painting in motion, with the final third set here in Houston. The soundtrack by Ry Cooder is spare, haunting and completely brilliant.

I’m particularly curious to see if I continue watching so much content after the pandemic.  I can’t wait to test that!”

“In the past year’s isolation, certain films have offered a respite from darkness (literal and metaphorical), entrapment and solitude. On the one hand, there are films, such as Truffaut's ‘Small Change,’ Kurys’ ‘Entre Nous’ and Almodovar’s ‘Woman on the Verge of a Nervous Breakdown,’ that enact community, relationship and the humor of the socius. On the other are films that transport, expand normalcy and limitation into exploration and joy: Agnes Varda’s ‘Les Plages d’Agnès’ and ‘Faces Places,’ Steve Coogan and Rob Bryden’s series of travel films, ‘The Trip.’ On top of that, any Hollywood musical that features the amazing dancer, Eleanor Powell, recharges energy. And to know all is still stunningly beautiful, there is Jacques Demy’s ‘The Umbrellas of Cherbourg.’”

These submission excerpts have been edited for conciseness and clarity.