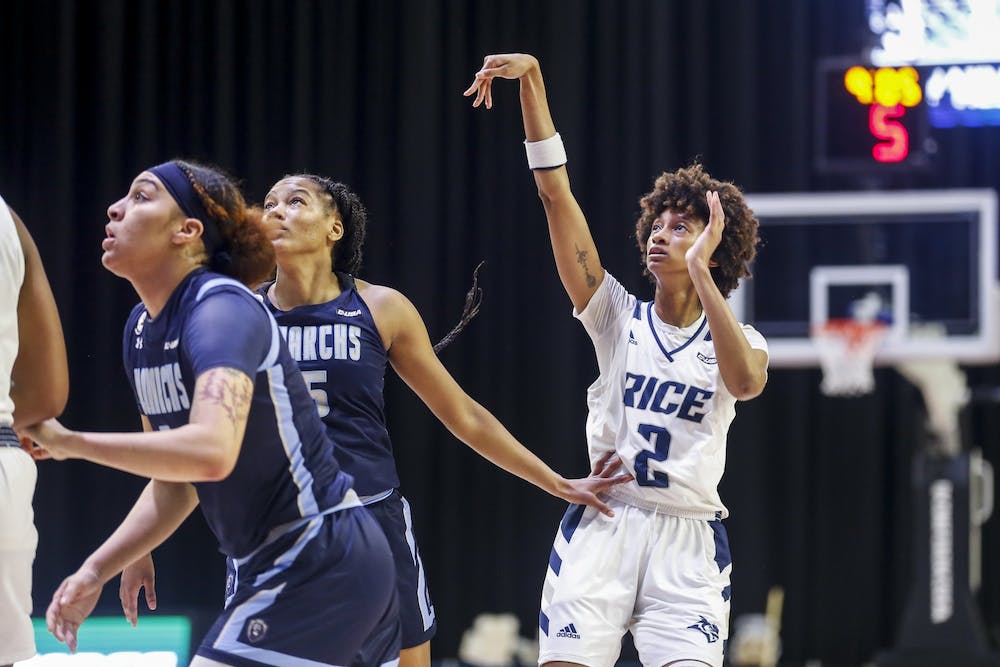 The women’s basketball team held off Old Dominion University on Friday night to advance to the finals of the Conference USA tournament. Rice held the lead all game, but a late Monarchs comeback tested the Owls, who held on to win by a score of 62-60. According to head coach Tina Langley, the Owls proved their character with such a gritty win in the final seconds.

“Resiliency has been the word for our team all season,” Langley said. “This is a team that has battled through so much this season. This is the most resilient team I’ve ever coached and I couldn’t be more proud of them.”

Rice jumped out to a large lead early, leading by as many as 16 points in the first half, and maintained their double-digit lead well into the fourth quarter. With just over four minutes left, the Owls led by 11 points, but the Monarchs stormed back with a 10-0 run that closed the gap to one. With under 30 seconds remaining and down by one, ODU missed four consecutive free throws (two from the initial foul, and two from a foul on the ensuing rebound). The Owls managed to pull away from there, with junior guard Haylee Swayze and senior center Nancy Mulkey each making a pair of crucial free throws to put the game just out of reach. According to Langley, the team’s ability to execute with the game on the line, even after Old Dominion staged a comeback, allowed them to secure the victory.

“This is tournament time,” Langley said. “It comes down not only to heart and will, but execution. [Our players] had some big moments in this game that really carried us over, and I couldn’t be more proud of them.”

Mulkey led the way for Rice with 23 points to go along with eight rebounds and four blocks. Sophomore forward Lauren Schwartz added 17 points on seven of 11 from the field, as the two combined for nearly two-thirds of the Owls points. Meanwhile, Rice struggled to find answers for Old Dominion junior guard Ajah Wayne, who had 25 points and 17 rebounds, both game highs.

The Owls will now turn their focus to tomorrow’s final, where they will face Middle Tennessee State University. The Blue Raiders won the C-USA eastern division, and were the other No. 1 seed in this tournament, on the other side of the bracket from the Owls.

“It’s a new day,” Langley said of the championship game. “I love tournament time because every game is so different.”

The Owls and the Blue Raiders did not meet in the regular season this year. The last time they did meet, in February of 2020, the Owls w handily: 77-60.

With a win, the Owls will secure a spot in the NCAA tournament, which begins on March 21st. ESPN currently projects the Owls to be a 12 seed, out of the 16 teams in their region. This would mark the second consecutive tournament that the Owls have made dating back to 2019, as last year’s tournament was cancelled at the start of the pandemic.