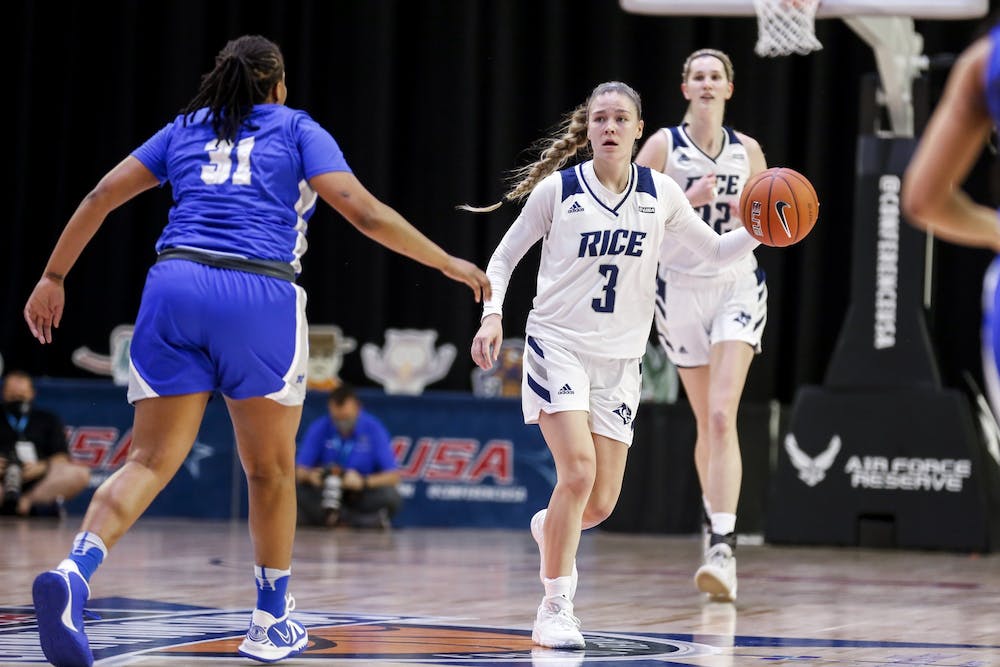 After barely escaping last night with a win, Rice women’s basketball fell to Middle Tennessee State University in the final seconds of yesterday’s Conference USA tournament championship game. The Owls managed to bring it to within one point during the final minute but ultimately lost the contest 68-65. Head coach Tina Langley congratulated the Blue Raiders program after the game.

“We started executing well on the offensive side of the ball, running our stuff a little more fluidly,” Langley said. “But in the end, I think I could have made some better decisions for our team. Congratulations to Middle Tennessee; I thought they played a great game. They worked hard all season, so hats off to them.”

In a rematch of the 2019 conference championship game, which the Owls won by 15 points, the Blue Raiders got out to an early lead. The Owls cut into it on multiple occasions, even having possession down by two in the final seconds, but a pass to senior center Nancy Mulkey was knocked away, and with it, their championship hopes.

“Mulkey’s such a great player, the chances are she would have scored or we would have fouled her,” Middle Tennessee head coach Rick Insell said of that possession after the game.

Mulkey, who led the Owls the whole game, finished with 21 points, 10 rebounds and five blocks. According to Langley, sophomore guard Katelyn Crosthwait thanked Mulkey in the locker room after the game.

“Nancy Mulkey played tremendously,” Langley said. “She’s battled for us, had some tough injuries, [opponents] play her physically, and she just keeps showing up every day. There’s really nothing she can’t do.”

A win would have given Rice automatic qualification to the NCAA tournament. Instead, the Owls now must wait 24 hours to see if they receive an at-large invitation to the dance. It is very rare for a team from Conference USA to reach the tournament without an automatic bid. However, the Owls received the 37th most votes in the most recent NCAA coaches’ poll, indicating that they may have an outside shot at cracking the 64-team field. If the Owls fail to qualify, their season is over.