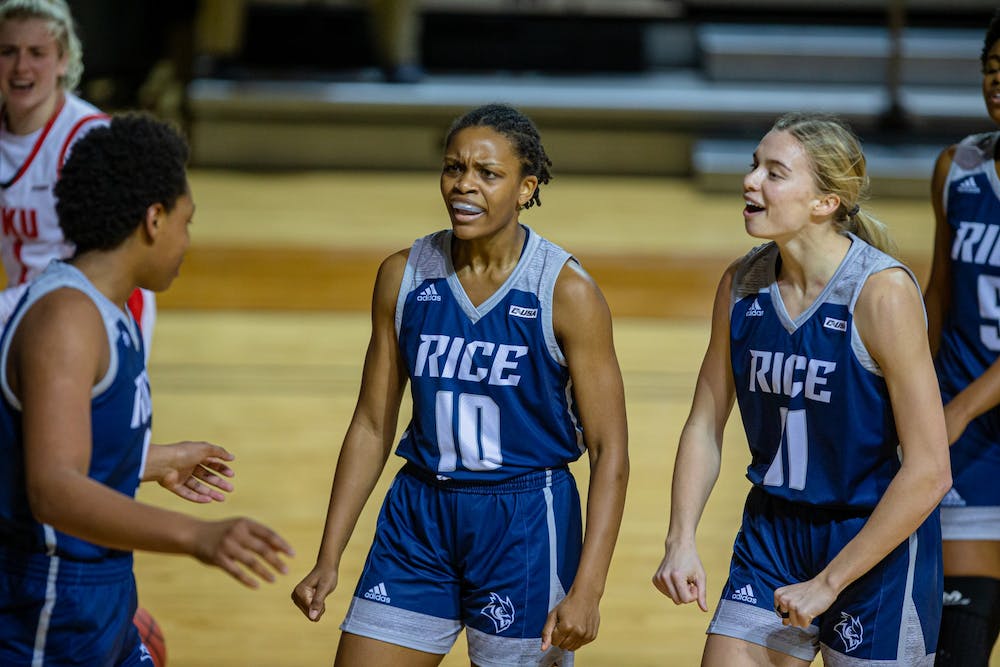 Women’s basketball wrapped up their regular season schedule last weekend with a series against the University of North Texas. The Owls started the weekend on the right note, winning the Thursday night game 64-58 to clinch the Conference USA West Division title. The Owls fell to the Mean Green on Saturday afternoon, bringing their record on the season to 16-3. Despite this loss, they still enter the tournament as the No. 1 overall seed.

This is the third consecutive year in which the Owls have won the C-USA regular-season title, a first in program history. Head coach Tina Langley said that despite the tumultuous season, she is incredibly proud of her players and the program overall.

“It’s been a season of strange pauses, with injury and sickness,” Langley said. “What I love most about our team is that we’ve been very resilient. I’m just grateful for all of the young women who have come to Rice and made this commitment to both the basketball program and to their academics. I have so much respect for the women that are currently here, and that have been here [in the past].”

Senior center Nancy Mulkey said that the team was joyous about winning the regular-season title, but it was slightly tampered by their 75-66 loss on Saturday.

“Winning the regular-season title was great, but because we had this last game in front of us we couldn’t celebrate until we’d played our last game,” Mulkey said. “Obviously [that title] is special, but it’s not the way we wanted to end it.”

The Owls were in a hole early on Saturday, down 17 points at one point during the second quarter. They were able to claw their way back, bringing the game to within four, but ultimately the Mean Green held on and were able to snap the Owls 20-game home winning streak inside Tudor Fieldhouse.

“First I want to credit North Texas, I think Jalie Mitchell is a tremendous coach,” Langley said. “We came out and did some things that were uncharacteristic to us. Some of that they caused, but some of that we didn’t, and those are the things you want to clean up heading into the conference tournament.”

According to Langley, some problems that plagued the Owls on Saturday were carelessness and selfishness with the basketball.

“We have to take better care of the basketball, we were a little careless,” she said. “We [also] didn’t share the basketball like we usually do, which is incredibly uncharacteristic [of us].”

Langley was also quick to shoulder responsibility for the loss, adding that some additional substitutions might have helped the Owls down the stretch.

“I need to do a better job of making sure we stay fresh,” Langley said. “I personally should have made some better calls, so really the responsibility falls on me. [In the] second half I thought our defense hurt us; I thought we looked tired, and that’s where I should have subbed a little bit more.”

One member of the Mean Green, in particular, gave the Owls fits on Saturday: sophomore guard Quincy Noble. After holding Noble to just five points, on one of 11 shooting, in their matchup on Thursday, the Owls allowed Noble to drop 27 points in the final game of the season.

“I thought we made some adjustments that would help us in the second half, but we struggled in making those adjustments,” Langley said of the team’s defensive strategy against Noble. “Quincy played a good game; she’s a three-level scorer who can shoot the three and get to the rim. She did a nice job of taking what was given to her.”

Looking forward, the Owls will defend their C-USA tournament title this week, a title they’ve held for two years now because last year’s tournament was canceled due to the pandemic.

This year, the Owls have a bye through the first two rounds of the tournament thanks to their regular-season performance. Their first game will be tomorrow (Thursday) when they face the winner of the game between Florida Atlantic University and the University of Southern Mississippi.

“We’re ready to showcase what we’ve been working on all season,” Mulkey said. “We’re focused on the next game we’ll have on Thursday.”