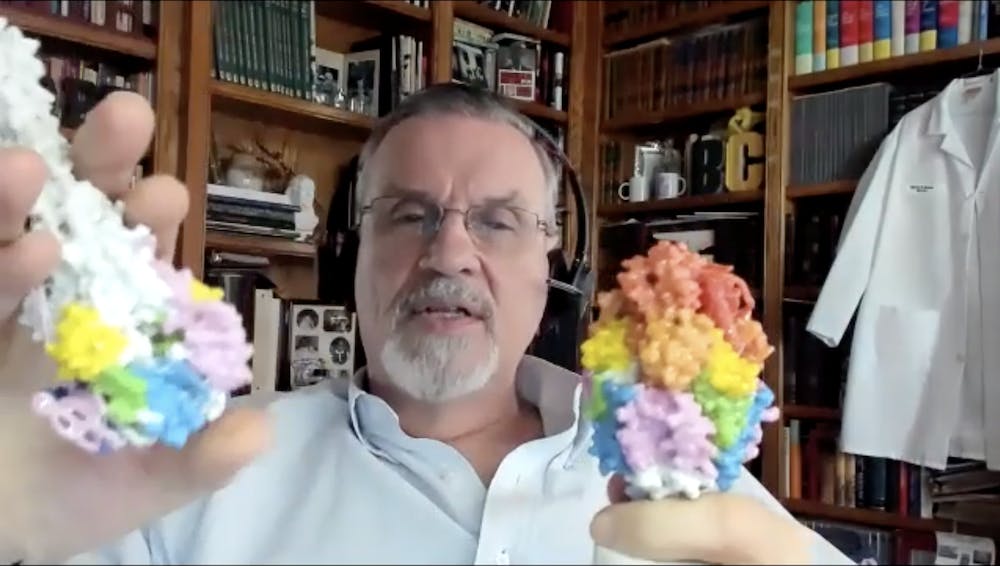 Graham shows The Thresher a model of the coronavirus spike protein, which he was already studying prior to the COVID-19 pandemic. His work on stabilizing this protein and designing a vaccine allowed his lab to quickly finalize mRNA sequence for the SARS-CoV-2 virus spike protein in January 2020.

Last week, hundreds of Rice community members received the second dose of the Moderna COVID-19 vaccine following the spontaneous vaccine clinic during the February winter storm. Few may have known that a Rice alumnus, Barney Graham (Will Rice College ’75), was the mastermind behind the vaccine’s messenger RNA sequence entering their cells.

Graham serves as deputy director of the National Institute of Allergy and Infectious Diseases’s Vaccine Research Center. Graham’s viral pathogenesis lab designed the first mRNA vaccine candidate that would express a stabilized form of the SARS-CoV-2 spike protein, and then partnered with Moderna to rapidly manufacture the vaccine for clinical trials. The spike protein is used by the virus to gain entry into a host cell, and generating neutralizing antibodies against this spike protein is the ultimate goal of both the Moderna and Pfizer vaccines.

Graham’s journey into science began on a farm in Paola, Kansas. His father, a dentist, purchased a farm when Graham was 12 years old. Graham and his brother raised quarter horses, cattle and hogs, which was a challenging assignment that allowed Graham to sharpen his problem-solving skills.

“There’s always a problem on the farm,” Graham said. “With that many animals and that much equipment, there’s always something breaking or in trouble. I learned a lot that way.”

Graham applied early decision to Rice, and right after being interviewed for admission, he fully expected to be rejected. When his interviewer asked how many books he had read that summer, Graham replied that he had read none. Rather, he had been working on his family farm, where he built a barn and put up miles of fencing.

“He said, ‘You didn’t read any books? Well, I have students in here every day, who have told me they read two or three hundred books over the summer,’ and I said, ‘Well, that was not me,’” Graham recalled. “I was really incredibly surprised later when I found out that I had been accepted to Rice.”

After graduating, Graham served as an alumni interviewer, which he said helped him understand why he had been accepted in the first place.

“There are a lot of smart people out there. And there’s a lot of people who have a lot of ideas. But there are not that many people who know how to finish things, or how to finish projects,” Graham said. “I, at a young age, could figure out how to organize and design a barn or fence and get those projects finished … They saw something in that idea that you could design and finish a project that superseded just being smart.”

Graham found his first semester at Rice quite challenging, having not been used to the level of competition or work. He said his pumpkin grades were subpar, but they provided him the motivation to work harder in his new environment and apply the problem-solving skills he had gained on the farm.

Graham started out as a mathematics major at Rice, but he took a topology class in his junior year and found the discipline too abstract and theoretical for his liking. He turned to biology in search of a less theoretical discipline, yet topology found a way to come back into his life eventually.

“I just couldn’t take [topology] anymore. And I said, ‘I’m never going to be able to apply this in my life,’” Graham said. “But the interesting thing is that because of all our work on structure based vaccine design and protein engineering, and trying to understand how antibodies recognize proteins to make vaccines, a lot of my current life involves understanding surface contours and the topology of proteins. So I use topology concepts all the time.”

Graham’s work on the COVID-19 vaccine stemmed from his expertise in understanding the structure of proteins responsible for viral entry into cells, specifically the respiratory syncytial virus. His lab had started working on coronaviruses because of the 2012 Middle East respiratory syndrome coronavirus outbreak, during which they developed a technique to induce stabilizing mutations into the spike protein sequence for vaccine design. By producing a mRNA sequence that could express a stable structure of the spike protein, Graham and his team had already solved the biggest challenge in making a COVID-19 vaccine for the spike protein.

“We knew how to make a good vaccine antigen, and because of all the other epidemics that we’ve been responding to that decade we wanted to do something in a more proactive way to be ready for the next pandemic,” Graham said.

When Graham and his team learned on Jan. 6, 2020 that the new outbreak in Wuhan, China was a coronavirus, they got to work immediately. They flipped an ongoing project with Moderna for another mRNA vaccine to make a prototype for the COVID-19 vaccine.

“On Jan. 7, we talked to the CEO of Moderna, and he said as soon as you send us the sequence and what to make, they’ll start manufacturing,” Graham said.  “[Moderna] had rapid manufacturing technology so we were combining precision with rapid speed.”

Graham and his team received the sequence of the SARS-CoV-2 virus on Jan. 10, and completed the vaccine design and finalized the mRNA vaccine sequence in the span of a few days to allow manufacturing to begin on Jan. 14. Following three phases of clinical trials, the Food and Drug Administration approved the Moderna vaccine under an Emergency Use Authorization in November. The U.S. government has ordered 300 million doses of the Moderna vaccine to date.

Graham said he believes that the lessons learned from designing the COVID-19 vaccine will allow researchers like him to design a future vaccine candidate even faster than the COVID-19 vaccine’s record time. Graham and his team are still busy working on monoclonal antibody treatments and vaccine design for COVID-19 variants.

“[The vaccine’s success] hasn’t really quite sunk in for me yet,” Graham said. “It’s very gratifying to see people getting immunized. It’s a wonderful thing to see the relief.”

Graham said his success in scientific research has taken a lot of persistence — something he first learned on his family’s farm in Kansas.

“Careers in science are a long time horizon. You have to often have delayed gratification to really do this and enjoy this. It’s a lifetime investment and it’s not a big one-hit idea,” Graham said. “You need to realize that a lot of these learnings come in layers, and layers build up and often take you to places that you don’t expect.”