Flooding, insurance and holes in the ceiling: Off-campus students talk lingering effects of the winter storm 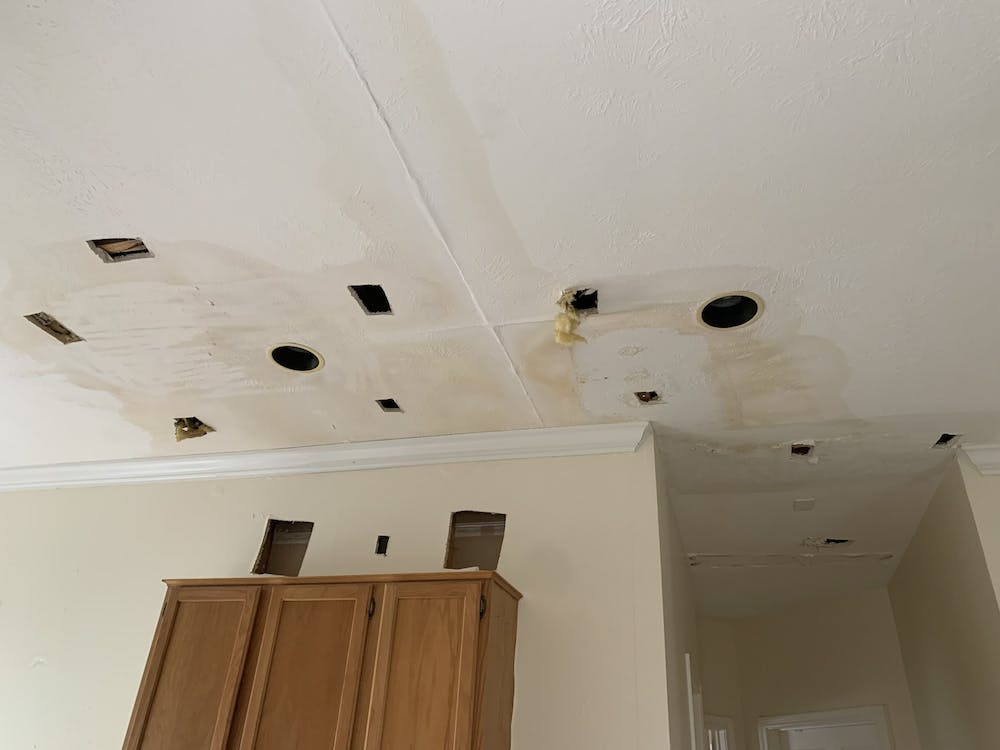 Katelyn Landry and Emily Weaver, Jones College juniors, had a pipe burst during the winter storm that caused major leaks in their off-campus duplex. The Thresher spoke with three students who are still weathering the effects of the unexpected February storm.

Although Rice campus emerged mostly unscathed from the Feb. 15 winter storm, some students living off campus are among the tens of thousands of Houston residents who dealt with the effects of home damage after the week of extreme weather.

Annette Jones, a Brown College sophomore, said she was appreciating the warmth and food on campus on Feb. 16 when she received a call from the administration of her apartment complex. They suspected that her unit had suffered damage, but they were unable to access their emergency key due to the power outage. Jones said that when she returned to her apartment, she noticed a cone sticking out of the wall, gushing water onto the sidewalk.

“The sealing capacity of our doors must be just insane, because I unlock the door and my shoes get soaked with water immediately,” Jones said. “There’s, I would say, about an inch and a half of water, coating every surface of my apartment.”

According to Jones, there were about three inches of water on the floor in her bedroom, where a pipe had burst, damaging her belongings and furniture. She said she suspects that the frigid temperature put the pipe in her bedroom under too much stress, as the panel that allows access to it has limited insulation.

“One of my friends [who helped me move my furniture to my new apartment] — he’s I think an engineer — goes … ‘Huh, I wonder why they have an access panel — a panel that you could open from the outside and reach the pipes — facing the outdoors. That seems like faulty construction.’ And then he looks up at the broken pipe. And then he goes, ‘Oh, that is faulty construction,’ which I thought was hilarious, because of course Rice students can identify the problem and then only after, see the fact that it was actually the case,” Jones said.

Jones said she slept at her residential college for three nights and then moved into a new unit in the same apartment complex on Friday. She said that she appreciated that online classes in the week after the storm provided scheduled times to focus on something other than her housing situation. However, Jones said she had to miss some class sessions that were recorded in order to set up the apartment and talk to her insurance company.

“I think the week that the catastrophe happened was dealing with the physical reality of it, where … I have to get my stuff off of the ground and out of the apartment and into this new location and my physical body needs to be somewhere that’s warm because at this point [I] haven’t been warm for 20 hours,” Jones said. “And then the week after, with Zoom classes, it was like, call your insurance [company], talk to them, call the leasing office and talk to them about transferring deposits and whether that’s allowed.”

For students who suffered home damage and retained their residence, the repair process may be continuing even now. Jones College juniors Katelyn Landry and Emily Weaver said burst pipes caused at least six major leaks throughout the kitchen, hallway and bathroom of their duplex from Feb. 16 to Feb. 19, when the landlord turned off the underground valve. (Editor’s Note: Katelyn Landry is the Thresher’s arts and entertainment editor.)

Landry and Weaver said they stayed at friends’ residences while their house was flooded and they had no water supply. Weaver said her magister allowed her to do laundry at Jones. Landry said that while away, she would return to the house several times a day to sweep the two to three inches of water that would accumulate every five or six hours.

“If I hadn’t been doing that, I have a feeling it could have gotten up to maybe eight or 10 inches of water in this area of the house,” Landry said. “Water was still leaking [during that time]. I came into the house and it sounded like it was raining, which is how bad it was.”

According to Landry, after the storm, the landlord cut holes in the ceiling and on the walls and installed industrial fans to prevent mold from growing. Landry said the pipes have been fixed, but the walls and ceiling have not. Weaver said that the property damages are not preventing her from going about her day-to-day life, although her ability to work at home will be affected when the repair works are being done in the future.

“There have been these really loud fans in the kitchen in the hallway and holes in our ceiling with insulation falling down, which is semi-dangerous because there’s fiberglass in them,” Landry said. “So we’ve been not walking around barefoot and trying to sweep it up. It’s been like that for about two weeks now.”

Jones, Landry and Weaver said their professors have been accommodating regarding coursework. Landry said she felt very supported by professors and fellow students, like those who shared resources for food and water on social media. Rice Mutual Aid helped her purchase groceries after hers had spoiled, she said.

“The weird thing about universal experiences like the pandemic and then again, this Texas snowstorm, is that we were all going through it together,” Jones said. “So I don’t think there was any Texan that really left that week, being like, ‘Well, continue at ‘em!’ If anything, it was the people who are on campus. But most professors were dealing with the brunt of it as well, probably not as severely, but [they] certainly could empathize.”

Weaver said people had vastly different experiences of the storm because some had power and water and were able to function normally while off-campus students may have been more affected. Moreover, it was difficult to focus and do well when two weeks’ worth of work was crammed into one week, according to Weaver.

“I think it was hard to try to cram all that work into one week while still dealing with some lingering structural damage to the house … [and] simple things like having to coordinate with my roommates when someone will be home to let the repair person in or communicating any new issues with the landlord,” Weaver said. “They seem really small, but [that’s] on top of losing an entire week of work where other people were able to maintain a normal schedule.”

Landry said the return to classes has been stressful and she is worried about the costs of the home damage if they aren’t covered by insurance.

“I think everyone felt like we had been taken out of time, just to bounce back into the regular pace of things,” Landry said. “We’re 20, 21-year-olds having to deal with these very real-life situations in which our parents are not gonna take care of them for us. The experience of having to struggle with this is compounded by the fact that you’ve never necessarily had to before, at least in my experience. It’s just all been very new and … jarring to have to go through this, especially if you’ve never necessarily have gone through floods or significant house damage.”

Jones said she did not have to attend to pressing concerns from the storm beginning Feb. 25, but she still has tasks to complete for her new apartment.

“There’s a bunch of annoying [issues] ... that they’re being very kind about, but there’s just still work that needs to be done,” Jones said. “So yeah, I definitely still think about it. It was so much stress that I don’t really think I’ll stop thinking about it.”