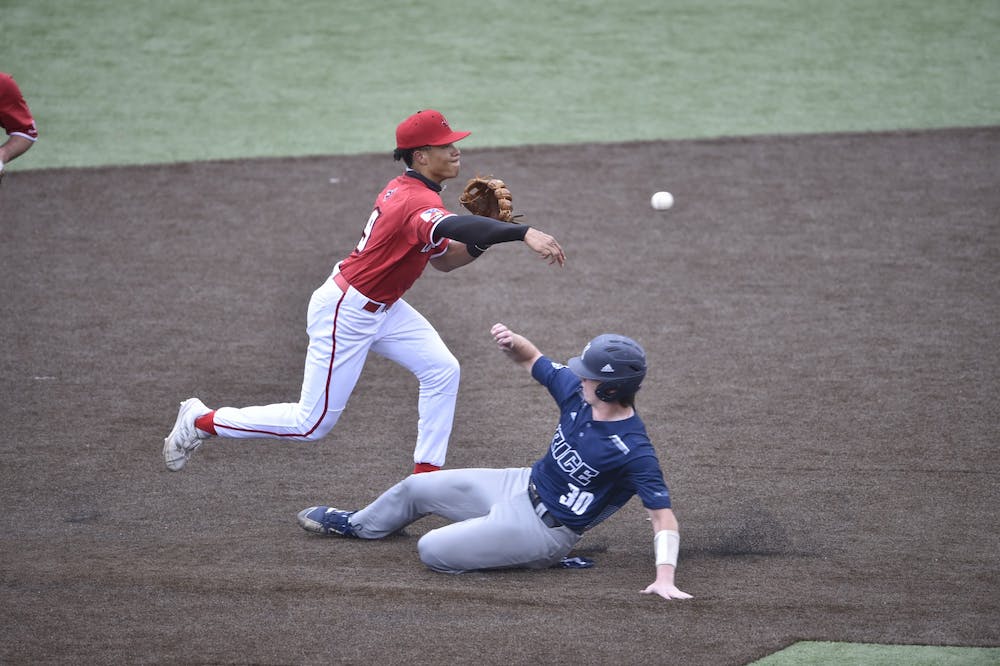 Rice baseball lost all three games played against the University of Louisiana this past weekend. After opening the season 2-1 in their series against Houston Baptist University, the Owls traveled to Lafayette, where they were promptly swept by the Rajun’ Cajuns. The Owls fell 7-3 in the Friday night game, and followed that up with 5-3 and 6-3 losses over the weekend,  dropping their overall record to 2-4. Head coach Matt Bragga took a somber tone in describing the weekend, pointing to the lack of offensive production as a big reason for his team’s struggles.

“When you lose three games [in a weekend], there aren’t any highlights,” Bragga said. “We’ve gotta work on run production and get better at-bats.”

The Owls managed only three runs in each game and combined for just 17 hits during the series. They also struggled to convert on opportunities when they had them, specifically on Friday night when they were 1-9 with runners in scoring position and left a season-high 10 people on base. The next day, the Owls managed to draw leadoff walks in four consecutive innings but squandered those too as only one of those runners came around to score.

“There’s a lot [to work on],” Bragga said. “Offensively, we aren’t producing enough. Right now, we get down a couple of runs and it feels more like four or five because we aren’t getting production. That’s something that has to change.”

On the mound, the Sunday game exemplified the highs and lows of the Owls’ weekend. Junior Roel Garcia pitched a shutout four innings, striking out eight. But after Garcia left the game, the Owl relievers struggled and gave up six runs in the following three innings.

“Garcia’s performance today was nice to see,” Bragga said. “His fastball and slider command was really good, he got out ahead of hitters and struck out a lot of them. But we didn’t look good out of the bullpen, and that’s got to get better.”

Garcia, who underwent arm surgery before last season, has been limited to four innings in each of his appearances this season for recovery. In those eight innings, he’s given up zero runs and has 11 strikeouts.

“This is the best I’ve felt since before surgery,” Garcia said. “I felt great, and I’m just happy to be out there. Being on the mound makes everything better.”

Going forward, Garcia anticipates slowly increasing his workload until he’s back at 100 percent.

“They want me to gradually increase my innings as I go,” Garcia said. “It’s better to take things slow than to start out strong but struggle at the end [of the season].”

Another bright spot in the Owls’ rotation has been freshman Reed Gallant. Coming into Saturday’s game in a five-run hole, Gallant managed to stabilize the game and pitched the rest of the way, allowing zero runs and only two hits.

“Reed was masterful,” Bragga said. “He did it all fall and all spring, but a lot of guys do that, and then when the lights go on it’s a different story. But he’s maintained that same composure and competitive spirit.”

This appearance, along with his debut in which he pitched five innings of no-hit baseball, means that Gallant has a 0.00 ERA through his team-leading 9.1 innings of work so far this season.

“My second appearance was probably more nerve-wracking than my first because I came into a situation with runners on base, but I managed to hit my groove,” Gallant said. “What’s been working well for me is my mentality that all that matters is the next pitch. I have also really liked the way my slider is playing and I hope to keep building on that.”

Back on offense, Bragga mentioned one other positive, but was quick to point out that it’s only a positive because of a lack of other production.

“[Another] positive was, and it isn’t even a positive because we have other guys in the lineup, but it was good to see five hits by freshmen [on Sunday],” Bragga said.

Indeed, all weekend long the Owls have seen strong production from their freshmen. Aside from Gallant, freshman centerfielder Connor Walsh went two-for-three with a home run and double in Friday’s game, before leaving Saturday’s game with a hamstring injury. Bragga said Walsh dealt with a similar injury during the fall, and his status is day-to-day.

Another freshman outfielder showing off his power was Guy Garibay, who made his collegiate debut on Friday, and on Sunday took a late-inning fastball the other way, over the left-field wall for a two-run home run. Garibay said he knew it was gone the moment he hit it, but also noted he needs to continue to adjust to college pitching.

“The home run was a fastball, up and out, and I just went with it,” Garibay said. “Luckily, it broke the wind and ended up going out. One thing I can improve going forward is hitting off-speed. I didn’t get as many fastballs as I like from these pitchers, but it’s all about adjustments.”

Though the freshman performances were promising, another injury could prove problematic for the Owls going forward. Graduate third baseman Braden Comeaux left Sunday’s game after getting hit in the face with a pitch; Bragga said it was likely a broken nose and did not offer a timetable for his return.

Going forward, Bragga stressed the importance of winning games, if only for the team’s morale.

“Louisiana is a good team, but you don’t want to lose,” Bragga said. “You’ve got to be careful with morale and trying to keep that up. But at the end of the day, we’ve just got to go win games.”

The Owls will be back at Reckling Park on Wednesday, before taking part in the College Classic this weekend at Minute Maid Park.