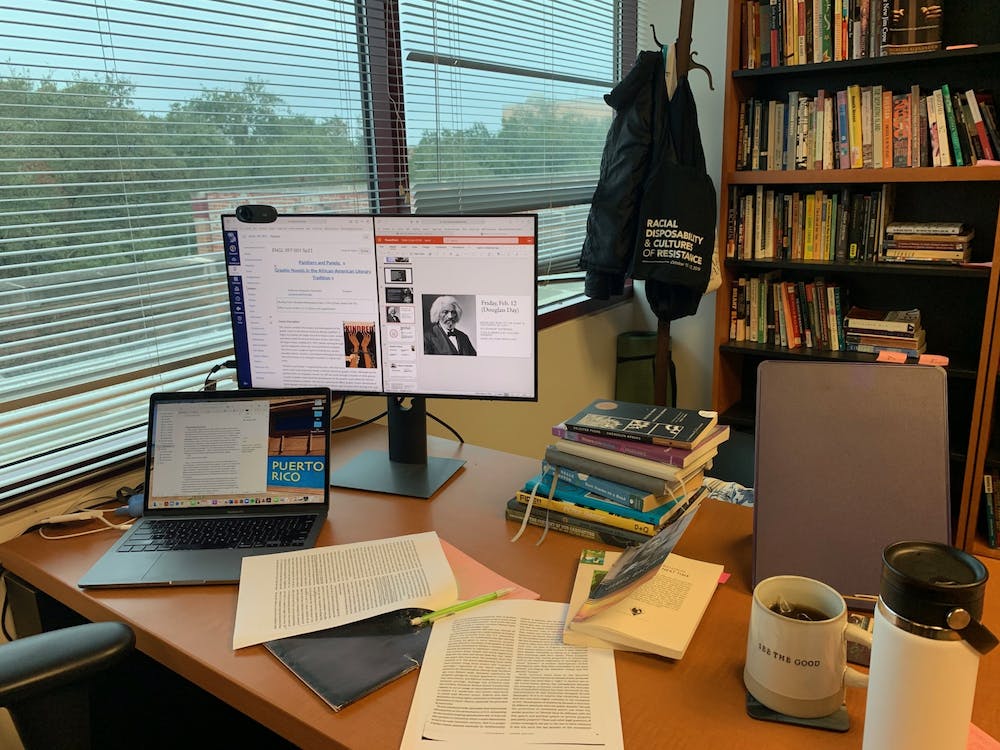 Margarita Castromán Soto, an English professor who joined Rice last year, teaches her virtual classes from her office. Castromán Soto is one of many new professors who have only gotten to know Rice in the COVID-19 era. Photo Courtesy of Castromán.

From spotty Wi-Fi connections in the middle of class discussions to talking to students over six feet of distance, Rice’s professors have faced countless difficulties adapting to yet another semester of online instruction this year. But for professors who were hired in the past year, this virtual and distanced mode of teaching has been all they’ve known at Rice. The Thresher caught up with four new professors to see how their first year at Rice has been going from behind the screen.

Incoming freshmen living on campus weren’t the only ones who had to move away from home in the middle of a pandemic — many new professors did too. Before coming to Rice, James Doss-Gollin, a tenure-track professor of civil and environmental engineering, was working remotely as a postdoctoral scholar at Penn State University. He started his career at Rice on Jan. 1 and moved to Houston from New Haven, Connecticut.

“Houston is very different [from Connecticut], but it’s a fun city. I’m really excited and happy to be in Houston so far,” Doss-Gollin said. “[The] food and even the takeout and truck scene in Houston is fantastic.”

Yimo Han is a new professor in materials science and nanoengineering who moved to Houston from Princeton, New Jersey in May 2020. Prior to teaching at Rice, Han was a postdoctoral molecular biology researcher at Princeton University. While she said she doesn’t feel like she’s been able to have the full experience of living in Houston yet due to the pandemic, Han likes how close she lives to campus and, like Doss-Gollin, appreciates the accessibility to good food.

Bezawit Getachew, a new professor of civil and environmental engineering, also moved to Houston recently. She was previously a postdoctoral associate at the Massachusetts Institute of Technology.

“It’s been difficult to get to know the city without being able to go to restaurants, but we’ve enjoyed exploring the different parks in the city,” Getachew said.

In May 2020, new professor Margarita Castromán Soto moved to Houston from New York City. Because she hasn’t been able to explore much of Houston yet, she said she’s not entirely sure how much she likes it.

“People ask me about whether or not I like Houston and I kind of don’t know yet,” Castromán Soto said. “I don’t feel like I’m living in the city. I come to campus to teach the hybrid courses and then I go back home, and that’s kind of it.”

Despite only knowing Houston in the pandemic, Castromán Soto said that she enjoys the weather, which makes Houston a great place to be right now.

Teaching behind the screen

Castromán Soto is teaching in hybrid mode this year. She began teaching last semester and taught ENGL 200, an introductory course for English majors, and ENGL 267: Introduction to African American Literature. This semester, she’s teaching ENGL 370: Reading Black Resistance and ENGL 397: Graphic Novels in African American Literature. Castromán Soto said that she decided to teach hybrid at Rice this year because she wanted to feel like she was actually teaching at Rice and not just sitting behind her computer at home.

“Especially being new it was a real gift for me to have that option to feel a little bit more like I was at Rice and getting to know the students,” Castromán Soto said. “[It’s] been good, but it’s a learning curve.”

Being a new professor in the George R. Brown School of Engineering, Han did not teach classes last semester. Instead, she was able to prepare and set up her lab for the spring. Han began teaching this semester with the class MSNE 435: Crystallography and Diffraction, and the lab course for the same topic. She said that the online delivery for these courses has been difficult, especially because it renders in-person lab activities almost impossible.

“For the lecture, I’ve found that it’s pretty hard to start with remote teaching because you are not fully engaged with students. Most of the time in the lecture you’re talking to a computer monitor,” Han said. “Although there are a few workshops from Rice introducing how to teach remotely, I still feel like during the remote teaching we encounter many problems.”

Han explained that it is often difficult to organize online materials like tests and quizzes, as well as adapt the course to the needs of all her students. She said that many of her students are in different time zones or have trouble with internet access, so it is not always easy for them to be completely engaged in the lectures.

Getachew began teaching CEVE 315: Urban Water Systems and the lab on the same topic this semester and said she has been pleased with how online teaching has been going.

“I’ve liked the flexibility it has afforded for the students,” she said. “Overall, it’s been smoother than I anticipated.”

However, she said that allowing students to collaborate on problems during Zoom lectures has been more difficult than she expected and that she’s still working to overcome that problem.

One of the biggest challenges for these professors has been figuring out how to keep students engaged during long Zoom lectures. Castromán Soto said that she was able to build most of her connections with students in the fall through office hours.

“Even if it’s just half an hour, getting to have a one-on-one conversation felt much more real,” she said. “I had a couple in-person [meetings] where we would walk or sort of meet [at Brochstein Pavilion] … and that was great, but honestly even the virtual office hours were really great.”

Because of her students’ tight schedules, Han has been holding her office hours in the evening instead of during the day. She said it’s been hard to find a time when all her students are available for office hours, but even then she doesn’t usually get more than one or two students to hop on the Zoom.

Despite a lack of connection with her students through office hours, Han said she has gotten better at engaging with her students during class lectures. She said she often stops to ask questions during class and leaves time for students to speak up and answer, and she also likes to post announcements on Canvas that students can reply to. When students seem to have difficulty engaging with the course, she also will put surveys for feedback on Canvas. Overall, Han has been impressed by the amount of engagement from her students in class.

Like Castromán Soto, Getachew has enjoyed virtual office hours this semester — and she said having few students show up actually has its benefits.

“I think office hours have worked well virtually,” Getachew said. “Since fewer students are present at the office hours, it's been pretty easy to have meaningful conversations and interactions with students during that time.”

Although he hasn’t yet started teaching, Doss-Gollin said he is already impressed by the welcoming community of Rice. He said that the people of Rice, especially the colleagues in his department, are by far his favorite part of joining the community so far.

“Everyone I’ve spoken with, mostly colleagues in my department, but some in other departments … everyone has been kind; everyone is really smart and bright and just interested in [innovative research],” Doss-Gollin said.

“I have the best colleagues,” Castromán Soto said. “I have a lot of friends that are teaching at other institutions that feel kind of lost in the middle of all of this, [but] it’s the opposite [for me]. I have a lot of people that are constantly reaching out … and making me feel very safe.”

Even though she thinks having to adjust from online teaching to in-person teaching in the future will prove to be a challenge, Han is looking forward to more interaction and communication with her students in the classroom in a post-pandemic world.

“I think also after [the] lecture, if it is in person, I expect students will come and ask questions, and there will be a lot of interaction,” Han said. “[It] will be much more interaction than [we have had] on Zoom.”

Being one of the only people to frequent Herring Hall last semester, Castromán Soto echoed Han and said she is ready for her office to be full again and said she’s ready for “informal moments” around campus when she can just run into people walking to class.

“I feel like I would step into the classroom in hybrid mode and there was energy there, but the whole walk over was just kind of distant,” Castromán Soto said. “I’m just looking forward to [campus] being filled with energy and life.”