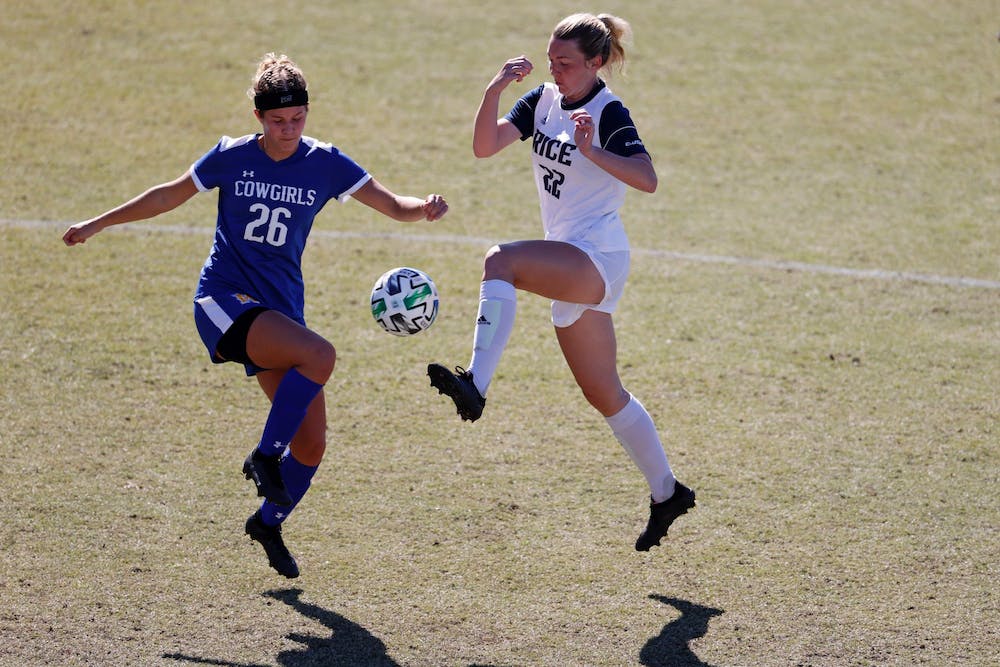 Rice soccer concluded their first game of the season on Sunday, beating McNeese State University 2-1 on Holloway Field. The Cowgirls got off to a strong start, finding the back of the net in the first minute of the match. But following the intermission, the Owls were able to score two unanswered goals that propelled them to victory. Head coach Brian Lee said his team recovered well from their initial shaky footing.

“Obviously we need to work on being ready to go when the game starts,” Lee said. “But we recovered well, stayed calm, and took care of business over the 90 minutes.”

From the perspective of junior goalkeeper Bella Killgore, the Cowgirls’ early goal was due to the Owls’ lack of mental readiness, as well as simple tactical errors.

“[Their goal] was a function of [us] underestimating the other team, not getting sucked into tackles, and not being first to the ball,” Killgore said. “Just simple things that we need to be better at.”

In an attempt to shake things up, Lee inserted senior forward Haley Kostyshyn into the lineup to start the second half. Kostyshyn, who was out the first half due to a minor injury, provided an instant spark. Off of a pass from freshman midfielder Catarina Albuquerque, Kostyshyn’s equalizing header found the back of the net in the 55th minute.

“I was definitely wanting to get in the game, seeing how the first half went,” Kostyshyn said. “The ball was fumbling around, [Albuquerque] got her foot on it, and I just saw it in the air and headed it in.”

“She smacked it,” Lee said of Futuro’s goal. “She isn’t scared; she’s tough and aggressive, and has a great attitude and personality on the field.”

The Owls were able to hang on to their one-goal lead for the remainder of the match. According to Kostyshyn, despite their early blunder, the team will take every win they can get.

“It might not have been the prettiest at times, but we found a way to win, and that’s really all we’re trying to do,” Kostyshyn said.

In an interesting twist, the leader in shots for the Owls was none other than Killgore, as the goalkeeper came up from her box to take free kicks for the Owls throughout the afternoon. It’s exceedingly rare for a goalkeeper to have any shots on goal, let alone four, but as Lee explained, this is something she has been working on for a while.

Killgore, who was surprised to learn that she led the Owls in shots, said this isn’t something she’s done at any level of soccer previously, but expects to keep doing it as the season progresses.

“It’s very exciting,” Killgore said. “[It’s] a good time, and you should see it moving forward.”

This match capped a strange week for Rice, as their schedule changed multiple times. The Owls were originally scheduled to open their season last Thursday, on the road against McNeese. However, that game was called in the first eight minutes due to poor field conditions. Then, on Friday, it was announced that the Owls’ Sunday opponent, Houston Baptist University, had suffered multiple injuries in their season opener and were forced to postpone their match with Rice. Fortunately, McNeese was available, and the Thursday match was rescheduled.

“One of our team mottos for this spring is, ‘don’t plan, prepare,’” Lee said. “I think these things will keep happening this spring, and hopefully we’ll keep being ready.”

The Owls will be back in action on Holloway Field, assuming no more schedule changes, against the University of Texas at San Antonio on Thursday, Feb. 11, and they’ll face Texas Southern University on Feb. 14.