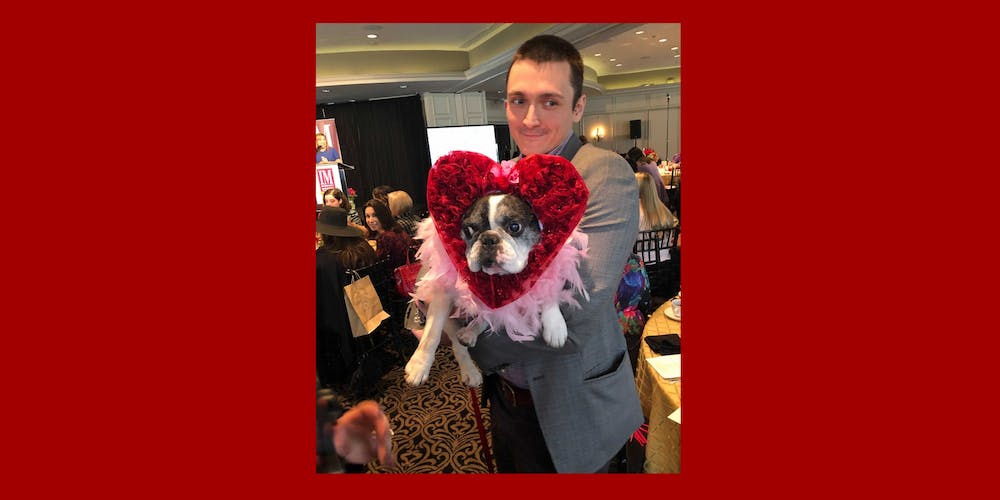 Postdoctoral fellow Evan Choate and his dog, Ace, at a pet fashion show benefiting a pet food delivery program. Choate designed and made the headpiece himself, and the photograph was taken right after Ace was announced as the winner. Photo courtesy Steven Duble.

Evan Choate has always been interested in contextualizing literature and narratives — and the past year gave him quite the backdrop to do so. For Choate, a postdoctoral fellow in public humanities with the Humanities Research Center at Rice, a central element to the narrative of being out or being proud is about “living your truth” and “embodying this identity” — a large part of which is done by accessing community. Although Choate lives with his husband and dog, being at home and isolated because of the pandemic has made this identity feel “muted,” he said.

“I’ve never really thought that explicitly about, ‘Why are the social aspects so important to my own sense of my sexuality?’” Choate said. “Whereas when some of these avenues are cut off from you, it becomes a more acute question.”

These ideas led Choate to conceptualize “Quarantined Sexualities,” a section of the class “Queer Literary Cultures.”

While conceptualizing the class, Choate thought about precedents in literature for the “imperfect isolation” we’re experiencing right now, where people have access to the internet and can interact with others, but still have a sense of being alone. Choate wanted to consider how questions of sexuality played out in various historical contexts before this pandemic, how the events of the past year have created a new perspective on sexuality and identity, and how historical texts can provide context to what people are experiencing right now.

“Especially for queer people, there’s so much that we lack right now, like events and spaces that people could congregate, that they could meet, which are sort of fundamental to a lot of people’s experience of community,” Choate said. “They’re just missing right now. So it’s part of a broader curiosity about the significance of that lack, or that absence.”

Choate grew up in Canada, and received his undergraduate degree in philosophy from the University of British Columbia. Towards the end of his degree, he took a Shakespeare class, sat in on a graduate seminar, and decided to pursue a master’s degree in literature. From there, Choate came to Rice in 2013; he got his Ph.D. in the English department last spring.

From the range of FWISs and upper-level Shakespeare classes that Choate has taught so far, the one that still sticks with him the most is “History and Meaning,” a class within the cultural heritage minor that he taught in the fall of 2018. The class contextualized historical texts and moments, focusing on literature, politics and social theory specifically in Houston and within the Rice community.

“That was another class where I sort of gave students a lot of leeway in terms of how they were going to approach the issues. I allowed them to bring in different texts and ideas that spoke to them, and we took them up as a class,” Choate said. “It was one of the best experiences that I ever had teaching. Because I think when you come into a class with open questions, you learn a lot from it.”

Choate is trying to bring that flexibility to the class he’s teaching this semester. “Quarantined Sexualities” is at its core a discussion-based class, but Choate plans to adjust the format over the course of the semester to allow students to engage in the most productive ways. The fact that people primarily convene and socialize on digital platforms these days is a direct result of the pandemic, which in itself is an example of the kind of cultural shift that the class focuses on.

“The class itself, and the class format, is very much within the realm of what we’re studying and what we’re interested in,” Choate said. “Which I think is maybe always the case to a certain extent, in a literature course, because we’re always sort of thinking about how we read and the context in which we’re reading, but I think it’s especially pronounced in this case.”

At the beginning of each meeting of “Quarantined Sexualities,” students bring in a current event or trend and connect it to a historical work that the class is looking at, as a way of generating discussion. When it comes to the final project, Choate has the broad contours of the ultimate goal in place for students who are interested in a non-traditional project: community engagement.

“I want to, in some way, have the project take the kind of work that we’re doing in the classroom, and use it to actually engage with the community,” Choate said. “I think there’s going to be a lot of creative leeway there for students who want to engage with the material in the course in a non-traditional way.”

Choate hopes to continue that creative leeway throughout the semester — in the last week of class, students will bring in a short text of their own choosing for discussion.

“I'm very much taking my hands off the wheel at the end, in terms of what the actual content is, because I'm interested in hearing after all of the discussions we have, what feels relevant to the students actually taking this class,” Choate said. “And I think that that's going to be very exciting.”

For the first class, Choate had students email him questions that they had about sexuality and the pandemic to get the ball rolling. According to Choate, finding the right questions is the most challenging aspect of learning and analytic work.

“The entire idea of gender is performative, right? What does that mean, when you're by yourself?” Choate said. “When you're thrust into a new context, you can sort of recognize that something feels different. But the part of the challenge is getting a sharp sense of what the questions are specifically, that you need to answer.”

Choate says that he experiences and thinks of his sexuality as a very social identity, which is operating in different ways that he does not fully understand the scope of. He’s been turning to literature to find answers to some of his own questions.

Choate is looking forward to all the assigned readings for class –– they form a “broad historical survey of moments in queer literature.” These include what Choate describes as “weird hits” from Canadian literature, and some medieval devotional texts. They’re also going to read “Antony and Cleopatra,” which is Choate’s favorite Shakespeare play.

“[Antony and Cleopatra] is just sprawling, and it's totally all over the place. And it's a wild ride. And so I'm excited to talk about that,” Choate said. “And I'm always excited to hear what students think about that.”

While he acknowledges that it usually takes a few weeks for everyone to become comfortable speaking in class, Choate is looking forward to hearing students’ perspectives and seeing how the class progresses over the semester.

“The conversations have already been quite lively,” Choate said. “The fact that it's already been so lively is, I think, a really good sign. And I'm just really looking forward to finding out where it goes.”