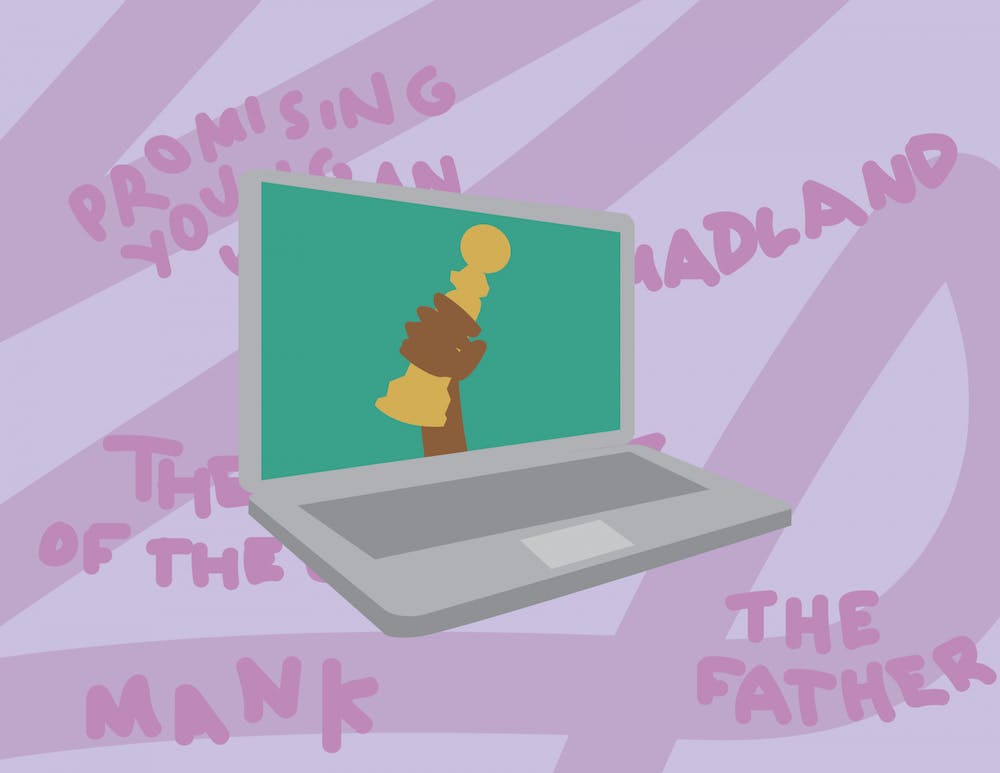 Even as many movie and TV show releases get pushed farther and farther back due to the COVID-19 pandemic, the Hollywood Foreign Press Association still managed to pull together a list of nominees that they think represent the best of the best of this year, despite the smaller-than-usual pool. The Golden Globes, often described as the precursor — and sometimes inferior sibling — to the Oscars and the Emmys, are happening this Sunday, Feb. 28 and I will be taking you through my predictions for the biggest categories in film and (some) television. Buckle up … because, once again, it is very beige.

Will Win: “The Trial of the Chicago 7”

Probably the biggest category of the night and the best indicator of the Best Picture winner at the Oscars, “Best Motion Picture – Drama” is filled with some … choices this year. Netflix dominates, as they often do these days, with two nominees, “Mank” and “The Trial of the Chicago 7.” While the latter will probably take the win due to its timely subject matter and big name cast, I will keep my hopes up for “Promising Young Woman,” my favorite film of the year and an excellent commentary on consent and complicity. However, I absolutely must acknowledge the snubbing of “Minari,” the story of a Korean, immigrant family starting a new life on an American farm. The groundbreaking film is making waves at the Critics’ Choice and Screen Actors Guild Awards, but did not break into any of the main categories at the Globes and I smell racism.

Having negative feelings surrounding the “Borat” movies is very, very fair. However, in a year with very little comedy, it was nice to see something that cracks a joke at our collective misery and exposes a predator along the way. Will it win? Maybe. But I think “Hamilton” has probably got it considering what a massive push Disney+ made following its release. How “Music” got in here, I have no idea; Sia’s directorial debut was seen as quite offensive to many viewers on the autism spectrum and was just generally not well rated. I’m exhausted.

Best Performance by an Actress in a Motion Picture – Drama

Though Frances McDormand stands a fair chance of winning for her role as free-spirited Fern in “Nomadland,” this award belongs to Carey Mulligan. In “Promising Young Woman,” Mulligan portrays a revenge-seeking badass feminist so flawlessly (and with such an impressive American accent) that nobody is able to deny her power here. I’m just disappointed Zendaya was snubbed a nomination again this year after her incredible performance in “Malcolm and Marie.”

Best Performance by an Actor in a Motion Picture – Drama

Chadwick Boseman gave an astounding, nuanced performance in “Ma Rainey’s Black Bottom,” and with Hollywood still reeling from his saddening death, it seems like the perfect time to memorialize him with a Globe. However, Riz Ahmed has made quite a showing on the indie movie awards circuit with “Sound of Metal,” so he probably has the greater edge here. Once again, I just wish the HFPA would give “Minari” the love it deserves.

Maria Bakalova made a stunning debut in “Borat Subsequent Moviefilm,” going so far as to put herself in potentially dangerous situations to get the footage. She absolutely deserves it. But the HFPA loves adaptations of classics, and with all the love Anya Taylor-Joy has been getting following “Queen’s Gambit,” she will almost certainly take the Globe home this year.

There really is no contest here. They want to award Sacha Baron Cohen twice this year and he really deserves it. His character is acutely self aware of his absurdity, and for that reason I think we should be able to laugh at the slightly offensive remarks he makes. On the other hand, many people found James Corden’s nomination for his offensive portrayal of a gay man in “The Prom” a total surprise. Like, Meryl Streep gave an excellent performance as Dee Dee Allen and this is the part you decide to acknowledge?

Unless Olivia Colman somehow pulls another fast one on her, this seems like Glenn Close’s year. No, not to win a Golden Globe — she already has three of those. This year, Close will likely take home the Globe and (finally!) the Oscar for her transformative role in “Hillbilly Elegy,” a true story about a family in the Appalachians, in which she plays the tough, but lovable “Mawmaw.” I just have to bring up Youn Yuh-jung too because, again, justice for “Minari”!

Should Win: Daniel Kaluuya, “Judas and the Black Messiah”

Will Win: Sacha Baron Cohen, “The Trial of the Chicago 7”

As I said before, they want to give Sacha Baron Cohen two awards this year. He’ll likely accomplish this, but Daniel Kaluuya deserves it for his wonderful take on Black Panther leader Fred Hampton. Also, how dare they snub Boseman his second nomination for Bill Murray in “On the Rocks,” a character who is just a boring, misogynistic, entitled father to the much better Rashida Jones.

Should Win: Regina King, “One Night in Miami…”

Will Win: Regina King, “One Night in Miami…”

Regina King will almost certainly win for her directorial debut, “One Night in Miami….” The small production was lauded by critics and fans alike and for good reason. If she won, King would be the first Black woman ever to win (she is the second nominee ever, after Ava DuVernay). Likewise, “Nomadland”’s director, Chloé Zhao, would be the first Asian American woman to win. Emerald Fennell is also nominated for her work on “Promising Young Woman.” Surprisingly (and pleasantly), there are more female than male nominees this year, marking the first time in history that more than one woman has been recognized in the best director category in a single year at the Golden Globes.

Here’s to debuts rising to the occasion! Emerald Fennell will likely take the “Best Screenplay – Motion Picture” prize this year for her first film, “Promising Young Woman.” The piece is brilliant and complex, with one of the best plot twists in cinematic history at the end. But yes, I still have to mention “Minari.” Huff.

Will Win: “The Crown”

The HFPA loves “The Crown.” It hasn’t taken “Best Television Series – Drama” yet, but with juggernauts “Succession” and “Game of Thrones” out of the way, it seems like nothing can stop it this time around. I mean, Jordan Peele’s first major foray into television, “Lovecraft Country,” should stop it, but, again, racism. I would just like to know how “Ratched” beat out “Killing Eve.” Dropping a brilliant Phoebe Waller-Bridge piece for Ryan Murphy’s “American Horror Story” 2.0? I need a formal, written apology.

“Schitt’s Creek” swept all the comedy awards these past Emmys for its final season and … it is going to get the Globe. Like, there is no doubt here. The biggest tragedy ever would be “Emily in Paris,” — the Netflix series that has been collectively hated by media critics for its unironic flaunting of white entitlement — making a surprise grab for the trophy.

Should Win: “The Queen’s Gambit”

Will Win: “The Queen’s Gambit”

Biggest Snub: “I May Destroy You”

Again, doubt has left the building. Everyone and their mother loved “Queen’s Gambit,” so they are fully taking this one home with them and then some. Sadly, Michaela Coel’s masterpiece and my favorite show of the year, “I May Destroy You,” did not make a showing. The reckoning better come at the Emmys because if there is a takeaway from nominations this year, it is that the HFPA is finally ready to award stories condemning sexual abuse, but only when they’re made by white people. And one last time for good measure, justice for “Minari.”