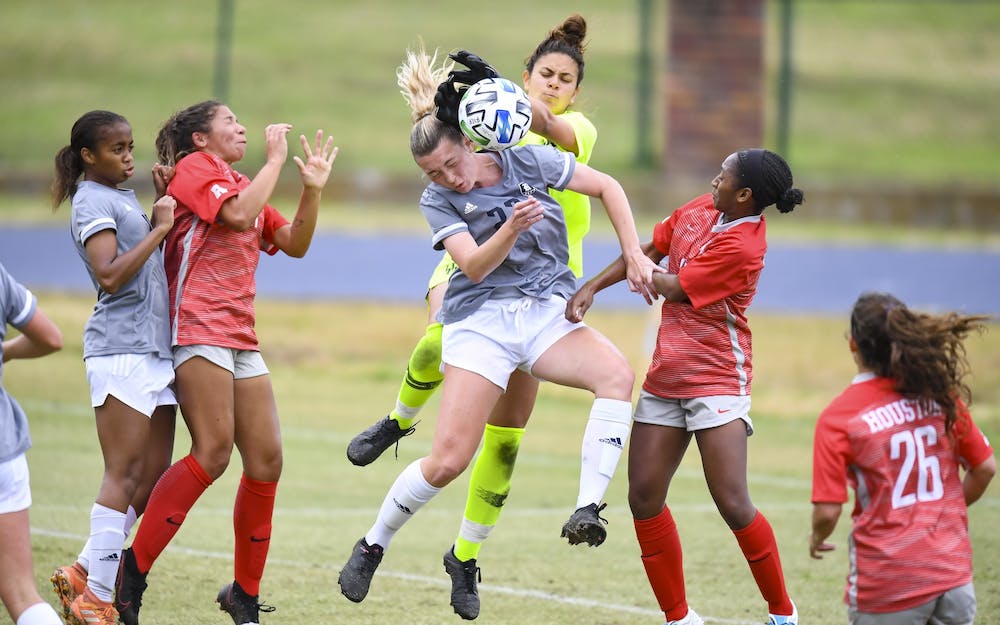 Following a hiatus of almost 15 months, the Rice women’s soccer team will start its season tomorrow squaring off against McNeese State University in Lake Charles, Louisiana. The Owls will rely on a deep roster, with eight of 11 starters from the 2019 season returning, as they hope to put together a successful 2021 campaign.

“We have a lot of experienced players coming back, a lot of starters coming back, and the newcomers have been really impressive so far,” junior midfielder Delaney Schultz said. “Our team has worked really hard and used these last 15 months to our advantage; we showed up in the fall every day and got better. Everyone is following protocol, and I think we’re putting ourselves in the best position to succeed this spring.”

The Owls got a taste of competition this past weekend in an exhibition match against the University of Houston, their first match since Nov. 8, 2019. The Cougars scored on a corner kick in the 16th minute and were able to hang on for a 1-0 victory.

Head coach Brian Lee said he wasn’t focused on the result, but rather what could be learned from how his team played against UH.

“I thought it was super productive,” Lee said. “We’ve got a bunch of new faces, and a couple [of] people coming back from some long-term injuries. This was their first game action in a long time. Very productive from a personnel standpoint, but also from a team standpoint, getting out [on the pitch] and finding out what we’re good at, what we’re not good at, and going from there.”

Specifically, Lee noted that the defense needs some improvement heading into the regular season.

“Right now we’ve got to be better with our box defending,” Lee said. “We’re not disciplined enough or where we need to be in that aspect. Our backline is [also] much different [than last year]; we’ll have two or three freshmen or players who haven’t played back there before, so it will take some getting used to.”

Still, the Owls are in a good position as the season kicks off. A poll of the 14 C-USA head soccer coaches saw Rice projected to finish No. 2 in the C-USA West Division behind defending co-champion North Texas University.

That coaches poll also revealed the Preseason All-Conference Team, to which Schultz and senior defender Mijke Roelfsema were named.

A transfer from Boston College and originally from The Netherlands with vast international experience, Roelfsema anchored the Rice defensive line during the 2019 season. She played a whopping 97.4 percent of the minutes during that season, leading a defense that allowed only 11.1 shots per game.

Schultz, originally from Saint Louis, Missouri, was named to the C-USA All-Freshman team in 2018 and carried that momentum through the 2019 season. That year, she led the Owls in shots on goal with 44 and finished No. 2 on the team in assists with four.

“It was a really nice honor,” Schultz said of the selection. “But I’m not worried about that; I’m focusing on performing this season.”

One advantage to the delayed start of this season for the Owls is that it has allowed for multiple injuries to heal, including Schutlz’s, that otherwise would have kept players out of the lineup. According to Lee, having their season pushed back due to the pandemic had both positive and negative repercussions.

“The plus is that we’ve had a lot more time to prepare,” Lee said. “The preseason in January isn’t quite the panic that it is in August, and we’ve been able to build fitness over time. But of course, we haven’t played a game in over 12 months, so we’re not used to 11-per-side against an opponent.”

Roelfsema echoed her coach’s sentiment, adding that the delay allowed the team’s newcomers more time to adapt than they usually receive.

“[The delayed start] has been good for the freshman, adjusting to the team and not getting here and being thrown into the season two weeks later,” Roelfsema said. “But at the same time, we haven’t played any games. Practice is just not the same. I felt that in the game — I think everyone felt that — it’s just so much quicker and there’s so much more chaos. We need to get used to that.”

Roelfsema also said that the extra time has allowed the team to get close, and that will hopefully show up on the pitch.

“We’re a very close team, we understand each other well, and that’s helpful [during games],” she said. “But that is going to take a little time to translate to the field.”

As for playing in the midst of a pandemic, Lee said the onus is on the players to handle their business in a professional manner.

“We need to be mature and professional about how we handle traveling and COVID,” he said. “Obviously, it’s going to be different, with the restrictions on the bus and the way we’ll eat.  Everything changes just a little, but when kick-off time comes we’ve got to be ready to play.”

Schultz added that she is pleased with the way the Owls’ have handled the COVID-19 situation, and is confident that it will benefit them throughout this season.

“Our team has stepped up during COVID and done what we needed to do to be ready for the season,” Schultz said. “I don’t think every team has taken it as seriously as we have. We’re ready to play.”