New Sid Rich opens doors to first of its residents 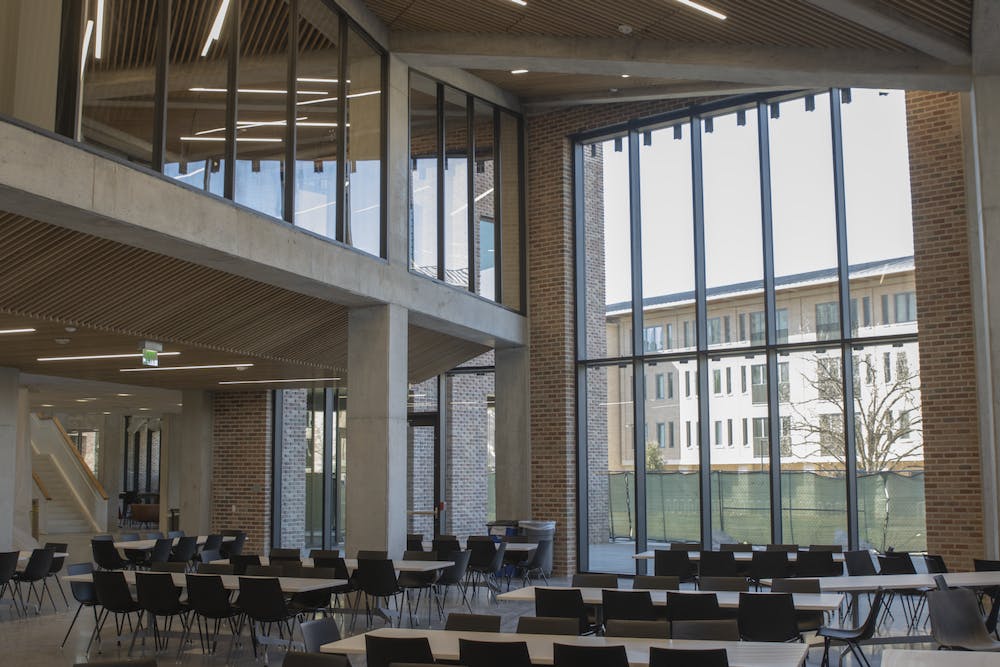 After nearly two years of construction, the new Sid Richardson College building opened its doors to the first of its residents on the week of Jan. 18. The building features ten floors of student housing, spacious common areas including a 4,000 square foot outdoor patio, isolated study pods, an Off Campus lounge and a theatre, according to Housing and Dining Senior Director David McDonald. The magisters’ house, quad and nearby parking lot remain under construction and are expected to be completed in the next two to three weeks.

Forty students are currently living in the new building after petitioning to move onto campus ahead of the Feb. 15 return date set by the university. Approximately 150 to 160 total Sidizens will reside there during the semester and continue to move into the new building in a trickle, according to McDonald. The building has a total capacity of 312 students.

According to McDonald, the second floor of the building features a dining room for students, two flex rooms, a kitchenette, a laundry room and a magisters’ house, which is still under construction. Also located on the second floor is an outdoor patio featuring solar panels, ceiling fans and comfortable outdoor seating on 4,000 square feet of space.

The New Sid commons features a terra cotta brise-soleil along the outer windows for sun shading and a ceiling made of red oak slats. Also located on the first floor is an outer commons with a grand staircase leading to study pods, a kitchen and a public dining room that Senior Project Manager Anzilla Gilmore deemed “the best PDR on campus.”

Ese Amata, a Sid freshman currently residing in the new building, lived in a McMurtry College double last semester. He said he enjoys the abundance of common study areas, “nicer” bathrooms and spacious facilities of New Sid, but his favorite part is how it facilitates an improved sense of community among Sidizens.

“The best part of my experience at New Sid is being reunited with all the freshmen and upperclassmen in the same building,” Amata said. “I look forward to rediscovering Sid culture and building a closer community once everyone is back on campus. It’s also exciting being the first set of students to live at New Sid.”

Jack Gray, a Sid sophomore, said that moving into the new building early has come with pros and cons.

“Moving back to campus early, I have been able to see the process of finishing New Sid, which has been super cool,” Gray said. “Along the same lines, the most difficult part has been feeling like I’m living in a construction zone.”

Alison Drileck, a Sid senior, lived in Wiess College last semester. She said she treasures the chance to be reunited with her fellow Sidizens for her last semester here.

“Even though it is a new building, being back around familiar faces gives it that sense of coming home,” Drileck said. “Just being able to go down the hall and ask if anyone wants to walk to dinner with me is such a huge morale booster that I didn’t realize how much I was missing.”

Drileck said she has been enjoying the space immensely so far.

“The new building is so, so nice,” Drileck said. “I’m in a dingle on the ninth floor and the view is absolutely stunning; the first evening at sunset I could see across the entirety of campus. We’ve definitely been exploring the building and getting a sense of the new space. It’s fun to imagine all the new experiences that future generations of Sidizens are going to have here.”

According to Amata, some maintenance issues emerged in his first week in New Sid, including a two-hour power outage and a couple of days where the water pressure flattened out, resulting in students being unable to use the sinks, showers or toilets.

Drileck said the ongoing construction made her move-in day difficult, but that the situation has improved since then.

“I came back on the very first day possible, and there was a lot of construction going on,” Drileck said. “It was a bit chaotic getting my stuff up to my room while trying to stay out of the way. Things have definitely settled down a lot since then. Now, the biggest struggles are the lights going out or occasionally losing water in the building due to the low occupancy or the odd construction noise during class.”

According to McDonald, the issues are due to the fact that work on the building is still ongoing.

“The building is not entirely finished and we have had to run tests on the new water pumps, so supply can be interrupted,” McDonald said. “The same goes with installing electrical fixtures and power has to be turned off for some of the projects. We tried to be very diligent with students moving in that there would be interruptions and sometimes contractors needing to enter their rooms.”

McDonald said construction of New Sid will continue on a more minor scale for the next two or three weeks, primarily on the magisters’ house, parking lot, sidewalks and quad, along with smaller operations inside the building that include painting, wall defects and sound and technology installations. Although construction workers continue to be present inside the building, they stay distanced from students and use a designated elevator to navigate between floors, according to McDonald.

Sid Rich resident associates Cam and Kasey Leigh Yearty said Sidizens have had to get creative with socializing within the bounds of COVID-19 regulations, utilizing the open-air seating and hammocks on the second-floor terrace. The Yearty’s, whose terms as RAs began this semester, have also been organizing distanced walks with a handful of students.

“We brought two of our puppies with us,” Cam Yearty said. “We’ve been trying to organize some around-campus walks with the dogs to … give the Sidizens who are on campus or in the Houston area a chance to meet one another. We start in the Sid commons [and] usually pick up a few stragglers who are just hanging around and want to go for a walk. It’s really been just trying to find those opportunities for easy, organic ways to introduce people to each other in this space.”

The New Sid commons connects directly to Seibel Servery, which now serves Lovett and Will Rice Colleges in addition to Sid Rich. According to McDonald, Seibel will expand its serving capacity by adding new serving lines and more kitchen storage capacity, including a new refrigerator and another storeroom. Although Seibel is currently closed, it will open by Feb. 13 at the latest, depending on how many students move onto campus early.

McDonald said he is proud that the construction and planning teams still managed to complete the project this semester despite the trying events of the past year.

“When you think about what we went through in the past 18 months since we broke ground … we had two near-miss hurricanes. During COVID. And we still managed to get this thing open,” McDonald said.

Kasey Leigh Yearty said that while she and her husband have loved welcoming in the trickle of Sidizens that have moved into the new building so far, they’re excited to build a community in the year ahead. Cam Yearty added that the fall semester spent in dispersion across campus has likely shaped Sid culture for years to come.

“Some of those ad hoc solutions that [Sidizens] came up with over the past year are probably going to carry on even when we are back together,” Yearty said. “The means of connecting virtually will always be with us. I think that’s a new tradition that they’ll get to keep and make into their own, hopefully as a supplement and not as a primary means of socialization.”

Drileck said that while the events of the past year were certainly not how she imagined her senior year, they have proved that Sid is more a community than a physical space.

“I think a lot of us went through that initial state of grief and confusion while trying to figure out what these changes would mean for our college, but then everyone sort of came together, eager to do the work,” Drileck said. “Our strength over this tumultuous time is truly owed entirely to all the amazing people who make Sid what it is: our college leadership, including our fantastic President Nia [Prince], our social and spirit chairs, our magisters, college coordinator, and resident associates, old and new, and everyone in our community who goes out of their way to try to provide what made their own experiences special to others. Even with all the twists and turns this past year has brought us, I could not imagine being a part of a different residential college. Sid is my family, no matter the space we call home.”