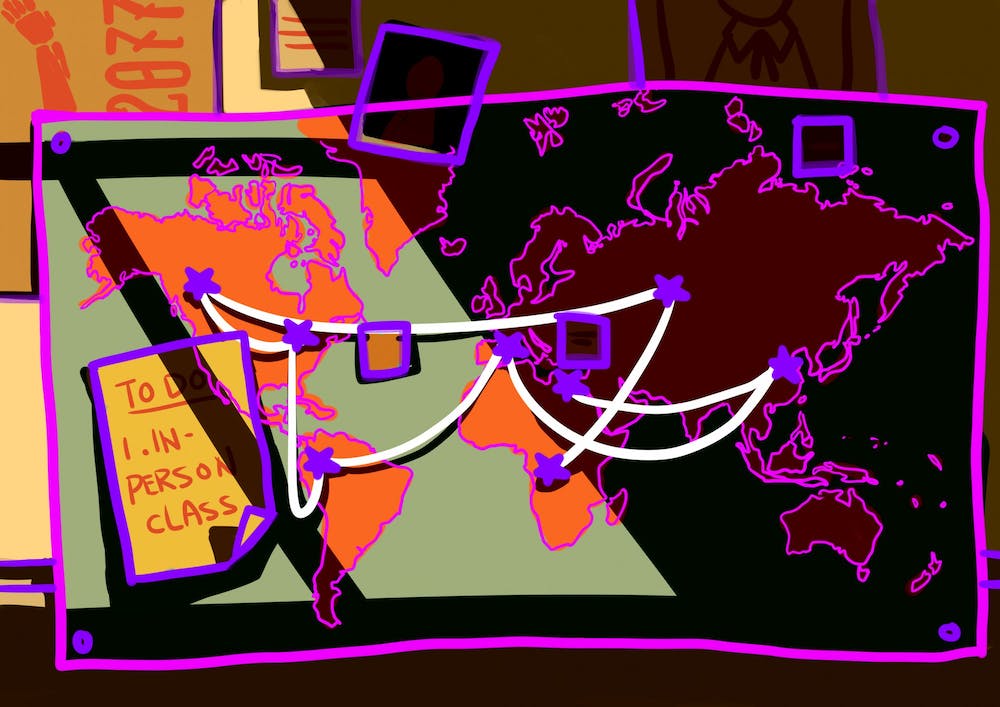 New international students rushed to find at least one in-person class that would begin at the start of the semester to satisfy visa requirements, after most of the classes that had an in-person section pushed back their in-person component to start on Feb. 15.

This requirement only applies to students who arrived in the U.S. after March 2020, which includes freshmen students and transfer students who have recently entered the country. New students who are taking their courses fully online are not eligible to enter the US on an F-1 visa.

“People who are here in the United States and were new[ly issued] an F or J visa after March 9, 2020 needed to have an in-person course at the start of the semester,” Adria Baker, executive director of the Office of International Students and Scholars.  said. “There are still [in-person] courses [that begin at the start of the semester] being offered, it’s just a smaller list.”

Jonathan Gan, an international student from Malaysia, said he had originally planned on taking an in-person political science course to fulfill the requirement. When the in-person section of that course was pushed back to Feb. 15, Gan said the Registrar Office directed him to a list from which he could choose an alternative course that was approved to begin in-person on January 25.

“I had an in-person class going and it was fine, but when Rice announced that they were going to push back the resumption of in-person class to Feb. 15, that class was ineligible for [fulfilling visa requirements],” Gan, a freshman at Jones College, said.

According to Gan, the list on the Registrar’s website was confusing because it contained classes that didn’t actually begin on Jan. 25. For example, one of the classes offered on the list was held in-person after Feb. 15 and wouldn’t have fulfilled visa requirements.

“For FOTO 205, Intro to Photography, I emailed the professor and it turns out that the class wouldn't even be starting in person until Feb. 15,” Gan said.

Justin Schilke, the senior associate registrar, said the classes on that list were approved to meet in person prior to Feb. 15, but students had to email each professor on the list to determine if a class actually met in-person at the start of the semester. Schilke said he does not know how many classes on the list met at the start of the semester.

“The list was, and continues to be, a list of courses that were approved to meet prior to Feb. 15, 2021, which means that they could ‘may’ meet before then; that does not mean that they actually did or will,” Schilke said. “You would need to contact the individual instructors to determine if the course met or plans to meet prior to Feb. 15, 2021. I can't even estimate this number. You would need to poll the individual instructors of the courses.”

Barry Dunning, a professor of physics, said the Registrar’s Office asked him to open an in-person section of PHYS 102 that would start at the beginning of the semester. Dunning said he now lectures to around six international students in person in conjunction with his online lecture.

“I was happy to have people in class because frankly, I enjoyed lecturing to people in class,” Dunning said. “I think it was during the first week of classes this problem came up. So I said it was not a problem and I'm happy if you want to open a face-to-face section.”

Mehek Jain, an international student from Hong Kong, said she ended up registering for a class that didn’t fit her schedule. Jain said it would have been more convenient if the Provost organized an in-person study hall class that would fulfill the requirements for the visa.

“My solution would have been to just do like a three-credit in-person study hall,” Jain, a freshman at Lovett College, said. “It would have made life for all of us a lot easier. But instead, all of us had to spend numerous hours emailing professors and trying to figure all this out.”

According to Baker, the OISS decided not to push for a special in-person class that would solely satisfy visa requirements for this semester.

“We did not want students to waste time and money. We were rushing to help them find something that wasn't just [a course] to fill a slot,” Baker said. “We wanted it to be a positive experience and for the courses to be something that would be meaningful.”

Jain said she appreciates the effort of the OISS in finding classes for international students.

All of the students that were searching for an in-person class which began at the start of the semester were able to find one and fulfill the visa requirement, according to Baker.