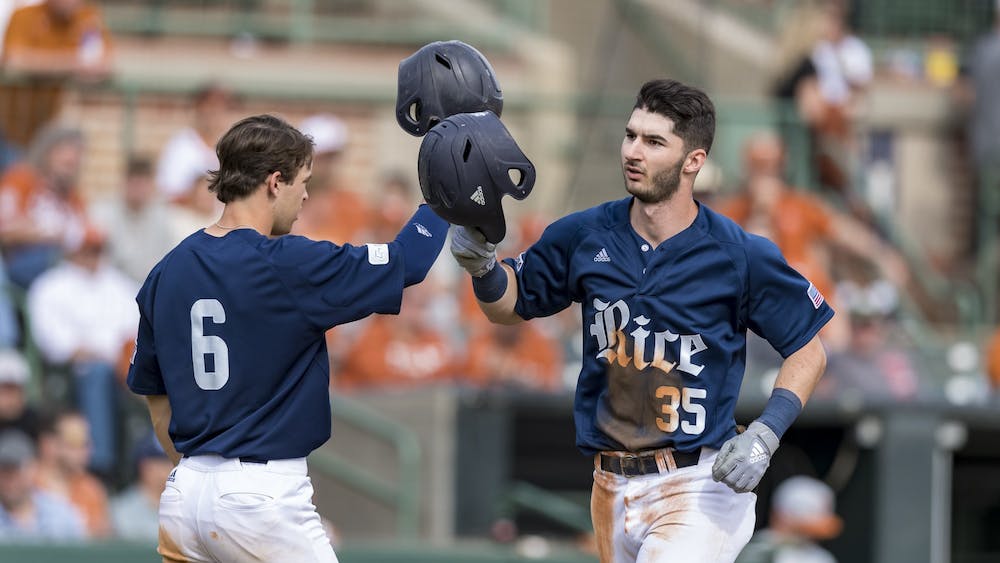 After a disappointing and shortened 2020 campaign, the Rice baseball team is hoping its plethora of veteran talent can inspire and lead the team in a new direction in 2021. Their season begins on Friday against the University of Arkansas at Little Rock. According to junior shortstop Hal Hughes, the depth of this Owls roster will be vital to their success.

“Our greatest strength is experience,” Hughes said. “We have a lot of older players and good veteran leadership. It’s not often you get guys who’ve played five or six years of college baseball.”

Due to the NCAA’s decision to grant an extra year of eligibility to spring athletes who had their seasons cut short last March, the Owls will return a number of players who, in an ordinary world, would have seen their last pitch of college baseball last spring: graduate third basemen Braden Comeaux, senior infielder Cade Edwards, graduate utility player Bradley Gneiting and junior starting pitcher Roel Garcia, who might well have been taken in the MLB draft had it not been shortened due to the pandemic.

“We know the ropes,” Garcia said of himself and his returning cohort. “We’re here to get things going and to lead this group of guys.”

Head coach Matt Bragga emphasized the importance of that leadership and the impact it will have on this year’s team.

“It’s nice to have the veterans back,” Bragga said. “There are some really good leadership qualities in those guys, not to mention they’re great players as well.”

The Owls’ lineup is fairly set in stone given the large number of returning players, as well as a number of transfer students who are joining the team this year. On the bump, Bragga sees three starters leading the rotation.

“We’ve got a pretty good idea of [our rotation],” Bragga said. “The guys we’re looking at are Garcia, Blake Brogdon and Mitchell Holcomb, in no particular order.”

Garcia had two promising seasons at Rice in 2017 and 2018, but an injury has kept him mostly sidelined since early 2019. He only managed to throw two innings in last year’s shortened season, though he struck out three of the eight batters he faced.

“Roel is a game one starter; he is that guy,” Bragga said. “We just need him fully healthy, and

speaking with him the other day, he feels as good as he has felt.”

For Garcia, getting back on a mound after only facing eight batters in two years is an exciting prospect, and he is chomping at the bit for the season to start.

“I’m feeling 100 percent great; I’ve recovered almost to my full potential,” he said. “I still have a little [velocity] jump here and there, but I’m starting to get my mechanics back; everything is feeling in-sync.”

After Garcia is sophomore Blake Brogdon, who impressed fans and coaches last year in his handful of starts. He struck out 18 batters in 19.1 innings and held opposing batters to a .194 batting average.

Bragga also had high praise for Holcomb, a weekend starter in all four years at the University of Pennsylvania, comparing him to an all-time MLB great.

“[Holcomb] is the college version of Greg Maddux,” Bragga said. “He’s not going to blow you away with velocity but has incredible pitch ability. He’s an incredible competitor and a great leader. We’re really excited about him.”

Because Conference USA coaches agreed to play four games in each weekend series (with two seven-inning games on Saturday) instead of the usual three, Bragga expects some new rotational challenges. Pitching in the fourth game, he said, will be decided as they go, rattling off a handful of names that he’s considering for the role.

Bragga also said he’s considering saving his number one starter, who typically throws on Friday nights, to go all seven innings in the first Saturday game.

Despite this extra layer of coaching confusion, Bragga said he has no objection to the extra games being played.

“I have no problem with [the new schedule],” Bragga said. “It’s the best way to maximize the number of games our young men are going to get to play.”

Indeed, Bragga said he was the only C-USA coach to vote in favor of playing nine-inning doubleheaders on Saturdays, instead of seven. According to the Owls coach, his love of baseball and his desire to make the best use of the Owls’ pitch depth, motivated him to vote the way he did.

“I wanted [four, nine-inning games] because I love baseball,” Bragga said. “I think baseball is a nine-inning game. One thing that I think we have is pitching depth; why wouldn’t I want to maximize the [number of] innings we get to play? Plus, it helps young guys develop, and [seven innings] is just less baseball.”

As for his bullpen, Bragga left the conversation very open-ended.

“Do we have a guy who I think is our ‘closer?’ No, I don’t,” Bragga said. “But we have a good amount of guys whose roles could turn into that, and that are capable of that, so we’ll see.”

On the rest of the diamond, the Owls will sport a veteran infield and a mostly brand new outfield come opening day on Friday.

“I’m excited about where we’re at offensively,” Bragga said. “I really like our lineup, we’re deeper than we’ve been, and I’m excited to get going.”

According to Bragga, the lineup is going to look something like this: Comeaux will start at third, Hughes at short, Edwards at second, junior Austin Bulman would be at first and graduate transfer Will Karp would be behind the plate.

Notable in the infield are two transfer students: Hughes and Karp. Hughes was a three-year starter at Louisiana State University, starting 109 games in the infield over three seasons for the Tigers. According to Hughes, a large part of his decision to come to Rice was the coaching staff.

“I decided to come to Rice because it was a great fit for me,” Hughes said. “[There’s] great tradition [here] and a great coaching staff; I really connected with the coaches when I first started talking to them.”

As for Karp, a transfer from Haverford College, Bragga referred to him as “one of our best infielders” and a “whale of a catcher.” It looks like Karp will take the job from last year’s starter, junior catcher Justin Collins, who is out indefinitely with an unspecified injury.

“We’ll see,” Bragga said about Collins. “Right now, there’s a possibility that [Collins] will be back. But if not, we’ve got a good plan B.”

Bragga added that should Collins come back, he would consider moving Karp to second and Edwards to the outfield.

As it stands now, the outfield is two-thirds set. Freshman Connor Walsh, a transfer from the University of Mississippi, will be in center field, and true freshman Guy Garibay will be in right.

“Guy could hit three or four [home runs] as a freshman and I wouldn’t blink an eye,” Bragga said. “He’s a special hitter.”

Bragga referred to left field as “battle,” where any number of people could step in to fill the role.

With NCAA roster caps removed for this season, there are 43 Owls on the roster, compared to the 35 they usually carry. As a result, according to Bragga, day-to-day lineups might be much more fluid than they have been in recent years.

“I think this year could lend itself to playing more guys, to seeing different names in lineups compared to a normal year,” Bragga said.

The Owls are excited for the season to start, as are legions of college baseball fans. This could be an incredible year, given the extra year of eligibility, the lack of a roster cap and the shortened MLB Draft (five rounds instead of 40). There are more than one thousand extra college baseball players across the country this season.

“Across the board, this should be one of the best years in the history of college baseball,” Bragga said.