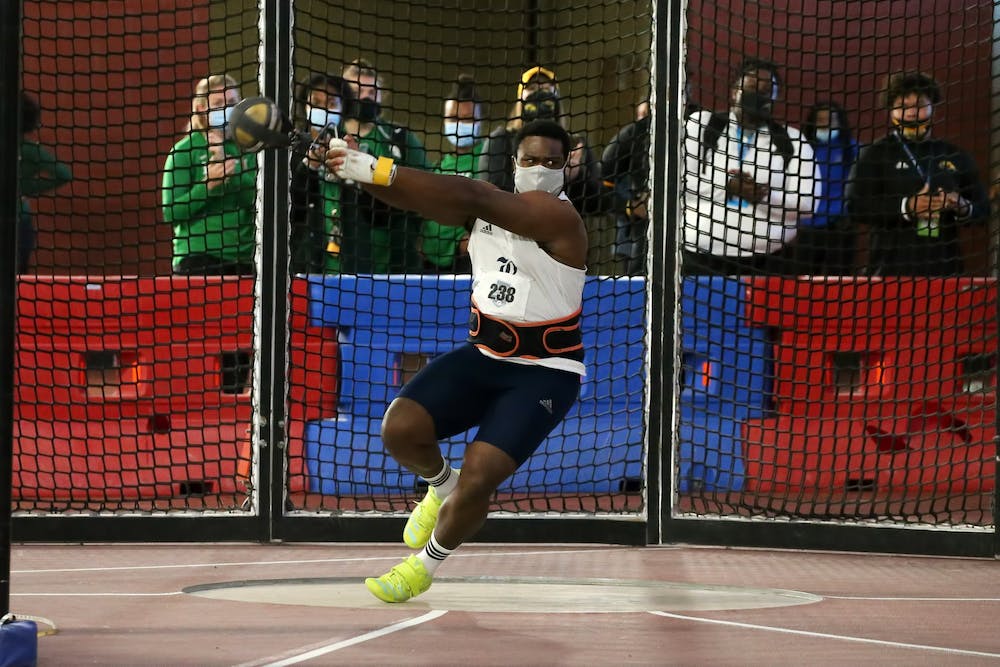 The Rice men’s track and field team placed No. 4 overall at the Conference USA Indoor Championships this past weekend. Relying in large part on the “field” half of their name, the Owls owned the medal stand in the pole vault and took home the gold in the weight throw, giving Rice 88 points for the weekend. The Owls were just two points shy of the University of Texas, San Antonio, who placed third.

Head coach Jon Warren said that he didn’t know what to expect heading into the meet, but was pleasantly surprised by many of the event outcomes.

“This meet had a lot of surprises, but then again, since this was both our indoor championships and our first meet of the season, we really didn’t know what to expect,” Warren said. “That being said, we had a number of things that were beyond what we could have expected.”

Perhaps the most surprising event of the weekend was the pole vault, in which the Owls took first, second and third place. That clean sweep of the podium earned the Owls 24 of their 88 points in a single event.

“Going 1-2-3 in the pole vault was huge,” Warren said. “That whole group was amazing and in different ways, they were all very impressive.”

Redshirt sophomore Alex Slinkman cleared a personal best 5.19 meters on his third and final attempt, enough to give him first place. He was followed by redshirt sophomores Thomas Pratt and Natan Rivera in second and third.

While the rest of the world may have been surprised at the result, Slinkman was not.

“I knew it was going to be the three of us on the podium when I looked at the entry list a few days prior,” he said.

Slinkman was also proud to be a part of this historic meet, as this was the first time Rice has swept the pole vault event in the history of the school.

“It was something we [have] wanted for years,” Slinkman said of the sweep. “I feel pride in our accomplishment and appreciation for our shared experiences.”

Though pole vault was figuratively the biggest surprise of the weekend, the literal biggest surprise is reserved for junior thrower Nick “Big Nick” Hicks. With a career-long heave of 21.30 meters, Hicks shattered the school record for the weighted throw and beat the next closest throw by almost two full meters to put him atop the podium.

“For Nick, we hoped he would win, but were surprised by how far he threw,” Warren said.

Hicks’ record currently sits at No. 15 in the NCAA so far this season.

Other Owls who graced the medal stand included redshirt junior Alex Topini, who finished second in the mile with a personal record time of 4:07.13, and redshirt freshman Chris Rivera, whose 16.17-meter throw in the shot put was also enough for a silver medal.

This meet capped off a wild week for the Owls and the entire state of Texas. The blanket of snow and ice across the state led to practice delays and constant changing of flights throughout the week.

“[The weather] was a real challenge,” Warren said. “We had so many flights canceled and rescheduled that, in the end, it seemed like a victory to just get to the meet.”

On top of the inclement weather, the pandemic had already caused problems for the Owls in terms of how their season was scheduled. The biggest challenge posed by COVID-19 was the absence of meets leading up to the C-USA Championship. This past weekend was the first time the track team had competed in 364 days.

“Not having any meets prior to this weekend is not the best way to prepare for a championship, but then again we are in a very unique time,” Warren said. “I think our guys really understand this uniqueness and adapted very well to special circumstances. They were presented with a once-in-a-lifetime challenge and handled it extremely well. I am very impressed by every member of this team.”