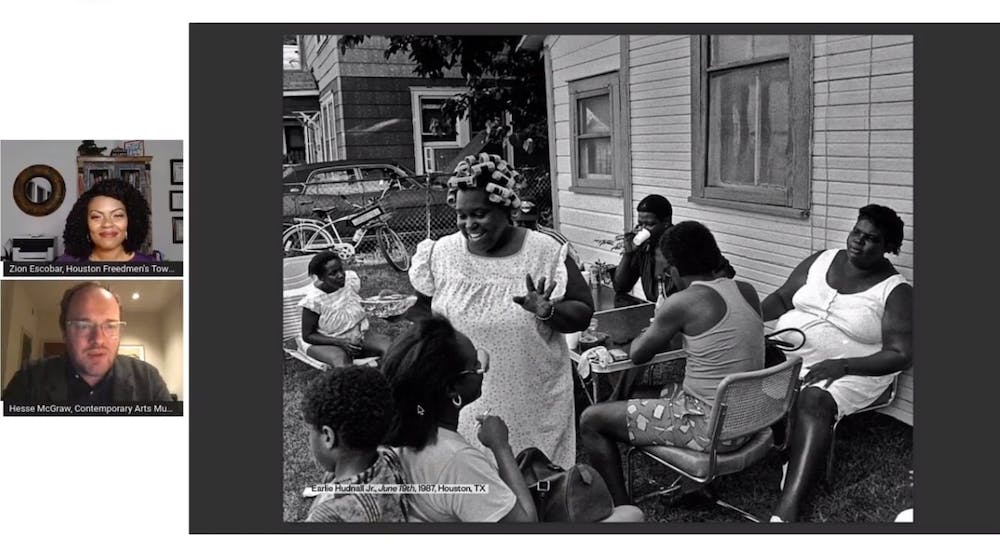 “I see a version of my family that I didn’t know.” Houston Freedmen’s Town Conservatory Executive Director Zion Escobar on seeing photographs of past inhabitants of Freedmen’s Town on Facebook Live on Jan. 28.

Nestled in Houston’s Fourth Ward is the city’s historic Freedmen’s Town, a neighborhood of formerly enslaved Black people settled post-emancipation into what would become a cultural and artistic hub, rightfully earning the Fourth Ward its title as the "Harlem of the South" in the early twentieth century. While only around 50 of the original 508 structures are still standing in the 40-block district, Freedmen’s Town remains a historical, cultural and artistic hub, and local non-profit Houston Freedmen’s Town Conservancy is dedicated to protecting and revitalizing the site’s legacy.

A new creative partnership between the Conservancy and Contemporary Arts Museum Houston will facilitate the construction of a new visitors center in Fourth Ward that organization leaders hope will encourage community engagement and education. The venture was announced last Thursday, Jan. 28 during a Facebook Live talk titled “Telling the Story of Freedom” with HFTC Executive Director Zion Escobar and CAMH Executive Director Hesse McGraw. At its core, the center will serve as a vehicle for telling the full story of hard-won freedom in Houston’s oldest African-American neighborhood — one that is only just beginning to be shared in its entirety.

Escobar and McGraw’s conversation began with an overview of the Conservancy’s goals for the center, which include supporting upcoming development by advocating for community building and public education through heritage-based tourism and events in the district. As they shared potential renderings of an improved Freedmen’s Town with live viewers, Escobar and McGraw agreed about the power of visual storytelling through art that “encompass[es] trauma, self-liberation, joy and freedom” in catalyzing civic engagement. Escobar noted that “those moments [captured through art] and their history are very indicative of the culture, beauty, and power of this neighborhood.” They emphasized that the redesigning of the town should serve in part as a reminder to visitors of the “greatness” that formed the foundation of their city, and that “there was something very special here and you should not forget it.”

While this new mission could arguably become the most ambitious project undertaken by the Conservancy to restore Freedmen’s Town thus far, it is preceded by multiple smaller-scale efforts that have helped pave the way for the site’s rehabilitation. In March 2018, city crews in Houston began reinstalling historic bricks in the neighborhood that had mistakenly been removed for a drainage project by a city contractor in November 2016. According to an article by Houston Public Media, this may have inadvertently damaged more than 3,600 bricks originally laid by formerly enslaved Black people after the Civil War. Houston Mayor Sylvester Turner, who advocated for the return and repair of the bricks, had pledged his commitment to preserving and reviving Freedmen’s Town and its historic buildings — a vision reiterated by Escobar last Thursday. Turner seems to have stayed true to his word, since the Conservancy was first created in 2016 as a Mayoral Task Force before becoming a non-profit organization in 2018.

Another one of Houston’s latest endeavors to honor the laborious brickwork of the town’s freedmen — who, according to the Houston Chronicle, paid for the red bricks themselves before laying them one by one in West African patterns — involved allowing residents to immortalize messages for future generations. The notes were integrated into a mixture of Texas clay and Buffalo Bayou sand that will form bricks for a memory wall at the future Freedmen’s Town visitors center. When the project took place in June 2019, Escobar told the Houston Chronicle that the wall would allow people the “opportunity to acknowledge the memories, the hopes and dreams, the kids that are here, putting their heart into these bricks … and putting it permanently cemented into history.”

These painstaking efforts to reconstruct and preserve the town’s history have not gone unnoticed. In 2019, after years of anticipation from Freedmen’s Town advocates, UNESCO designated multiple sites in the town as part of their Slave Route Project, a list of international locations linked to the transatlantic slave trade. Now, Escobar and the Conservancy have their sights set on attaining global recognition for Freedmen’s Town by becoming a UNESCO World Heritage Site. Mayor Turner’s office has expressed support for the designation in the past, as did Escobar during Thursday’s livestream.

When asked at the end of the talk what she would tell someone who was seeing Freedmen’s Town for the first time, Escobar responded, “If you’ve ever wondered what the story of Houston is… and where Beyoncé got her awesomeness from… ask yourself the story behind the stories. Freedmen’s Town is a thing you need to understand to put Beyoncé’s story in context.” She urged viewers to come visit the town and “fall in love with the story of freedom” in its raw and uncompromised form. It’s a story told by multitudes of voices long silenced, and as more people listen and begin conversations, it’s one that will be told by new voices too.