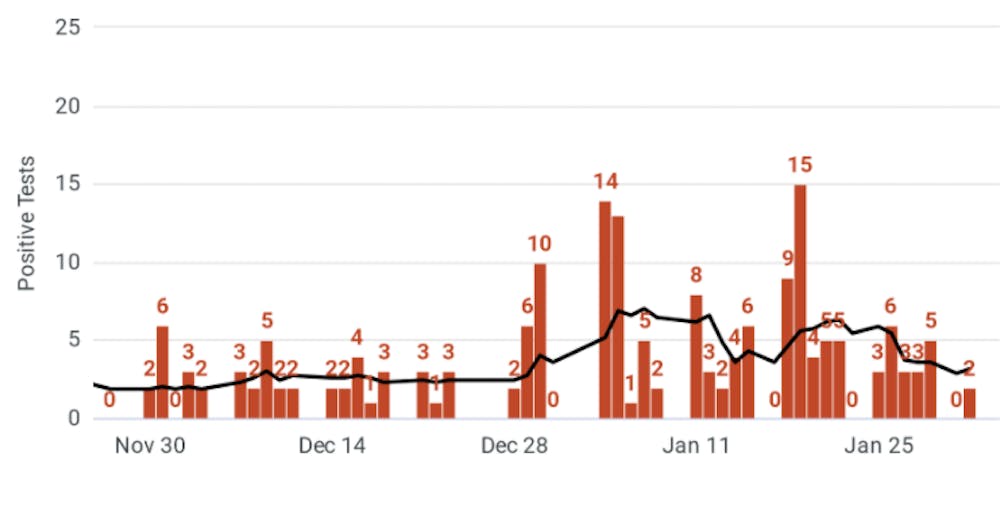 Rice experienced a spike in COVID cases over the past few weeks, much of which can be attributed to increased travel and laxer social distancing measures during the holidays, according to Kevin Kirby, chair of the Crisis Management Advisory Committee.

Kirby attributed the rise of cases to travel during the holiday season and off-campus activities. The cases were also not clustered in certain residential colleges or among certain segments of Rice’s population.

“It’s what’s been happening nationally. And what’s happened in the Houston area. So this was the result of people getting close to other people over the holidays, which is very predictable. We were just hoping that it wasn’t going to happen. But it has. So there’s been a huge rise starting in early December,” Kirby said.

Victor Nguyen, a senior at Lovett College, said he will be returning to campus in February but has been keeping an eye on recent case numbers.

“I think many students, myself included, were concerned that travel and gatherings over the winter break holidays would lead to an inevitable rise in COVID cases on the Rice campus. [I believed] complacency was definitely a danger to continued safety,” Nguyen said.

According to Kirby, Rice monitors data coming from the Texas Medical Center in order to determine changes in student or operational capacity. Because of this data, Rice’s Crisis Management Team, composed of approximately 50 people equipped with Rice’s COVID-19 policy, decided that it would be best to postpone the arrival of students, reduce gathering sizes and postpone online classes.

“These were in direct response to what happened over the holidays. We also did two other things. We asked all but essential employees, essentially to work from home to the extent that they could. And we rolled back some of our research activity to what we were doing back in summer,” Kirby said.

With these adjustments, COVID cases have been leveling off, according to Kirby. Thus, Crisis Management emphasized that they do not expect to move the Feb. 15 date further back as they anticipate the conditions to continue improving.

“We anticipate those faculty who want to teach in person to do so … after Feb. 15. But again, it depends.” Kirby said.

According to Sahana Prasanna, a freshman from Will Rice College, she feels safer coming back to campus than she does staying at home as there is a larger percentage of COVID-19 cases in her hometown.

“We also have the ability and requirement to get tested every week at Rice. Back home it is not easy to schedule or receive tests,” Prasanna said.

With the discovery of new coronavirus variants in the United Kingdom, Brazil, Spain and South Africa, Kirby said that the Crisis Management Team acknowledges an uncertain future. These new variants are believed to be more contagious than previous strains according to the Centers for Disease Control and Prevention, and the vaccine’s effectiveness to these new variations is unknown. The CDC recently reported that the U.K. strain could be the dominant strain in the United States by March.

“We know the [strain] that’s gotten a lot of attention is the one from the United Kingdom. And we know that is here in Harris County. But we don’t know how prevalent that is. However, that’s not the primary reason that we’ve seen an increase here in the area,” Kirby said. “What we don’t know is if we get another increase based on different strains that are more transmissible.”