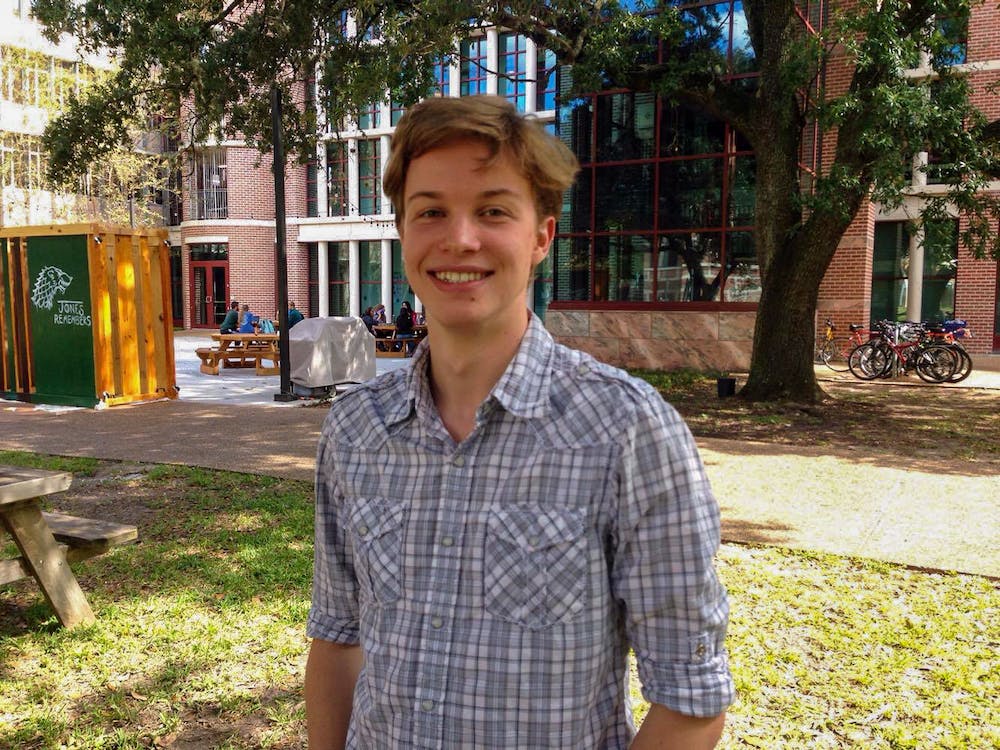 Nikolas Lindauer didn’t think he was going to college until his senior year of high school. In his sophomore year, Lindauer wanted to be a construction worker. Junior year, he had his eyes on joining the Navy. But then, he took the SAT to beat a friend in a bet and applied to colleges on a whim.

Four years later, Lindauer is gearing up to graduate from Rice with a degree in math and philosophy. However, the Jones College senior said his outlook on post-graduation employment remains just as cynical today as it was in high school.

“I'm realizing that a college degree doesn't get you out of [undesirable] jobs,” Lindauer said.

Lindauer’s journey at Rice to find a career path that piqued his interest was shaped by unconventional forces— including a concussion caused by a boxing match that hindered his ability to do schoolwork for months. While Lindauer said it was “just for fun,” there is no doubt in his mind that his time at Rice would be vastly different without it.

“During [Orientation Week], I decided I wanted to be a physics major, then I changed to math and philosophy when I got a concussion and couldn't keep up in optics. I got into a boxing match with this kid who was a linebacker, and he punched me in the head four times,” Lindauer said. “And then I couldn't read for two months. It probably dinged my GPA a little bit too. That’s why I’m not a physics major.”

Lindauer said the concussion prompted him not only to switch majors, but also to turn inward and become more spiritual than he had been previously.

“I had a religious awakening during that time period where I kept dreaming [a] really weird, repetitive dream, where God was in the desert, and he was telling me to go to the desert to not have a concussion. The whole time, I was like, that would fix it, obviously,” Lindauer said. “That went away when I got less concussed.”

Besides his temporary religious awakening, Lindauer said he took part in Rice’s judicial and law practicum, which also defined his time in college. For a while, Lindauer was considering trying to become a judge.But Lindauer said he gained a more realistic understanding of the job when he held an internship through the judicial practicum at Rice. While he treasured the friends he made through the job and still aspires to be an immigration lawyer, the practicum made Lindauer aware of elements of the job that made the shiny appeal of being a judge begin to fade.

“I realized that a third of their job is deporting immigrants and sucking up to businesses that can afford better lawyers,” Lindauer said. “So it no longer seems very appealing to me for those two reasons. It’s [still] a pretty good job, but it's one I wouldn’t want to do.”

Lindauer’s status as a loyal member of the fencing team also defined his time at Rice. Lindauer said he discovered a unique appeal to the sport that set it apart from many others.

“I never really liked team sports. As a kid, I always felt like unless my team was a bunch of clones of myself, I would either be letting them down or they'd be letting me down, and it really just destroyed the appeal to it,” Lindauer said. “[But] fencing is a really mental sport — it's a lot of strategy and it's kind of like poker, but you also have to sweat a lot for it.”

One man in particular shaped Lindauer’s experience on the team: Benoit Bouysset, a visiting coach at Rice University Fencing Club. Bouysset's fencing experience is extensive — he is a fencing master (maitre d'armes) and the former U.S. Men's Epee national coach at the Olympic Training Center in Colorado Springs. Lindauer said he learned lessons of commitment and dedication from Bouysset –– skills he admits he needed to work on.

“[Bouysset was] an unstoppable machine. Meeting him showed me that just dedicating yourself to something will have results," Lindauer said. "And that is an obvious thing for people who are better dedicated ... to things. But I think I've shown that is not my strong suit.”

Lindauer’s respect for his coach is reciprocated, Bouysset said. The former coach recalled his admiration for Lindauer’s hard work and curiosity.

“Nikolas was one of my most dedicated students, always happy and would volunteer to do the demonstrations with me for the exercises,” Bouysset said. “I wish him the best in his professional career, and I hope he will keep fencing and challenging his coaches.”

The interest Lindauer showed towards fencing extended beyond technique to the preservation of the sport, and Bouysset valued that interest.

“I really appreciate Nikolas' dedication during the classes, but also his curiosity about fencing in general,” Bouysset said. “One of my most memorable [discussions with Lindauer] was the day I told him the French fencing school where I graduated from, near Paris, had to close its residency program. I will always remember his reaction. It was sad to see him so affected by the news, but it was also hopeful to see him so caring and interested about the future of the sport.”

Lindauer’s time in the fencing club was cut short by COVID-19, the pandemic that effectively ended his junior year early. The transition has had its faults, he said.

“I appreciated the two weeks off of school, but I lost my mind pretty quickly after that,” Lindauer said. “I swear, Zoom makes my attention span just disappear. I stopped paying as much attention to my classes [when they went online]. I managed to get decent grades despite this, but school is just not rewarding in the same way.”

When it became clear that the pandemic wasn’t going anywhere for the fall semester, Lindauer and a band of friends took the opportunity to leave Texas for Colorado.

“We found an Airbnb for seven people that we crammed into [last fall]. It's in the middle of the Rockies,” Lindauer said. “It [snowed] a lot, [there was] pretty nature and it [was] super cheap. Like, less than half of what I was paying in Houston.”

Lindauer said his friends were decent cooks and great card players. However, his time in the Airbnb wasn’t quite the same as life on campus.

For Lindauer, it is not quite clear what the future may hold; his plans range from Teach for America to law school. These years spent have endowed Lindauer with a certain wisdom, however, and he has advice to spare for those just now beginning their time at Rice.

“Something that I have struggled with and I've seen many people struggle with as well [is] expectations versus what you actually want to do,” Lindauer said. “I would really recommend taking a very wide variety of classes while you still can. Don't do things just because you think you should.”

[1/28/2021 at 1:55 a.m.] This story was updated with clarifications regarding Lindauer’s concussion and career aspirations.