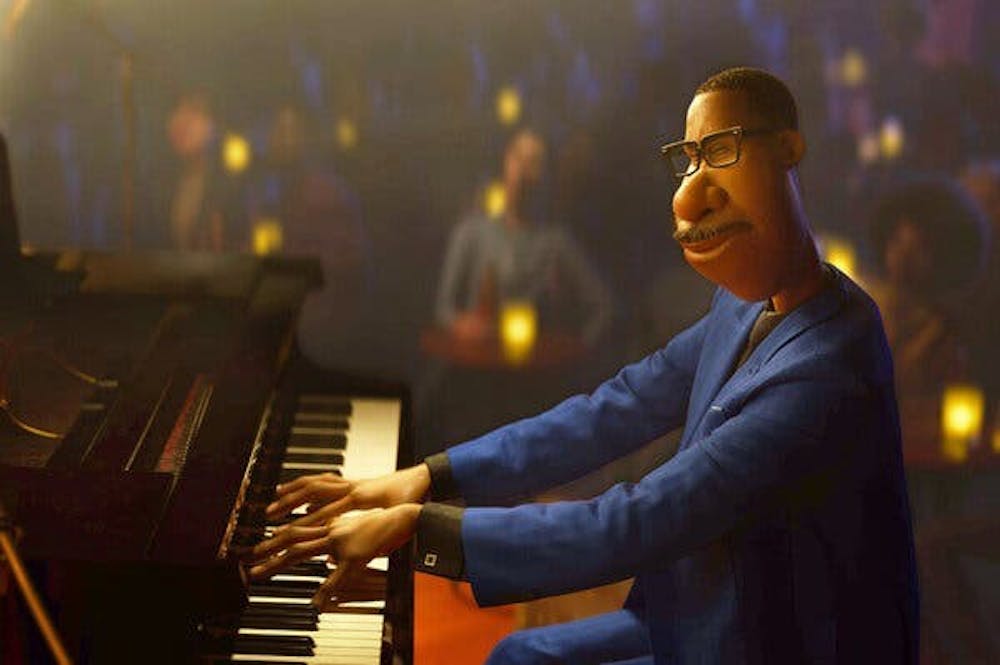 Disney and Pixar’s animated comedy drama “Soul” made history when it was released on Dec. 25, 2020 via Disney+, Disney’s at-home streaming service. "Soul" is the first Pixar film with an African American protagonist and predominantly Black cast, and has earned praise for achieving a level of existentialism that viewers young and old can understand. The film is the brainchild of co-director Pete Docter, the creative mind behind Pixar blockbusters “Inside Out” and “Up,” and Kemp Powers, who is now the first African American to co-direct a Disney animated feature. “Soul” impressed me with its outstanding animation and lively voice acting, and inspired me to reflect on mortality and meanings of my everyday life in a new way.

“Soul” tells us the story of Joe Gardner (voiced by Jamie Foxx), a middle school band teacher and jazz musician living in New York City. Right after getting a new gig with his favorite band, Joe was so distracted by his excitement that he fell into an open manhole by accident. While Joe’s body fell into a coma and lay in his hospital bed, his soul entered a metaphysical world called “The Great Before” where souls are mentored and then sent to Earth to live. There, he met an unborn yet cynical soul named “22” (voiced by Tina Fey) who has no interest in leaving The Great Before and living a life on earth. The two souls strike a deal to help Joe return to his body in time to play the gig of his lifetime and allow 22 to evade the mortal coil forever. Of course, things don’t go as planned, however the two souls’ adventures in New York City enable them both to appreciate life in a brand new way.

Since watching my first Pixar film “Finding Nemo” in 2003, I’ve watched Pixar animators consistently achieve new heights of animation innovation with advancing visual technologies over the years. In “Soul,” the metaphysical worlds of pre-life and post-death existences are finely detailed landscapes populated by anthropomorphic yet abstract figures that together build a dream-like atmosphere. In particular, “Soul” represents New York City in an impressively realistic way through its animations, focusing on both its negatives and positives. Car horns, rushing traffic, and always busy pedestrians feature streetscapes. Some anxious subway riders yell at each other while others stare straight at their phones. But “Soul” also shows us how beautiful New York can be by curating scenes that are less bustling and more calm: golden maple trees in the warm afternoon sunshine, flashing neon boards stand quietly in the darkness and marvelous pizza shops hidden at street corners. When I saw the fireworks at Brooklyn Bridge, shining lights on the Manhattan skyscrapers, and the magnificent view of the New York City skyline, the scenes of one of my favorite cities in the world brought me to tears, even in an animated film. Without doubt, the animators succeeded in capturing both the grandeur and serenity of the legendary city.

The film also captures New York City’s rich jazz culture. Joe’s late father Ray Gardner was a highly respected musician in the city and a source of inspiration for Joe — he emphasized to his son that jazz is “Black improvisational music” and “one of our great contributions to American Culture.” To reflect jazz performance accurately, the director and his team went to clubs in New York City for a better understanding. They also consulted a number of marquee musicians like Herbie Hancock, Terri Lyne Carrington, and Questlove. In “Soul,” several pieces of jazz were present throughout the film, including Joe’s solo impromptu as well as group performances with his favorite band. Some pieces are relaxing while others are passionate, but all of them are engaging and have distinctive tone colors. My favorite piece is when Joe plays his piano at home while recalling small but sweet memories of his past. The music flows slowly and gently, prompting a sense of nostalgia and contemplation.

The “Soul” production team say they made conscious efforts to characterize Joe as “believably Black while avoiding the stereotypes of the past” “ In addition to promoting Kemp Powders as the co-director during the production process, Pixar also created a “Cultural Trust,” including a diverse group of Pixar’s Black employees, while seeking advice from external consultants and Black organizations. Pixar artists and animation technicians worked to capture the texture of Black hair and include a spectrum of different Black skin tones in order to resist animation’s history of racist imagery and one-dimensional representations of the diverse community.

Despite these efforts to bolster BIPOC representation, Joe’s depiction as a soul — illustrated as a vaguely humanoid blue blob — for the majority of the film has prompted considerable criticism for not giving Black characters enough full-body representations. I agree that Joe should have retained more of his Black identity in the metaphysical world, more than just his glasses and hat to distinguish him from the other souls. Furthermore, Joe’s soul also becomes trapped inside of a cat for a large portion of the film while 22 accidentally inhabits his body, meaning Fey’s voice emanates from the protagonist instead of Foxx’s, making Joe seemingly a supporting character rather than the protagonist to some audience. “Black and Brown people not only deserve audio representation in animated cinema, but full screen time in their complete bodies as well,” writes award-winning journalist Ernest Owens. “I want to see them cry, laugh, and emote with darker complexions. That shouldn’t be too much to ask for at this point.” Pixar’s 2017 animated movie “Coco” is a great example of how this could’ve been accomplished. In “Coco,” the protagonist Miguel retains his Latino identity and strong Mexican cultural elements are prominent both when Miguel is in his hometown among the living and in the spiritual world of “The Land of the Dead.” By doing the same, this would offer “Soul” a more distinctive and richer cultural context so the audience can understand Black customs and culture better.

On a philosophical level, “Soul” discusses and illustrates existential questions about life and death in a uniquely creative way. Joe illustrates a universally relatable modern dilemma — though we search for opportunities to do what we love, we must concern ourselves with making a living first and foremost, so we are often forced to relegate our passions to the sideline. As a soul in “The Great Before,” Joe reflects on his mundane life, and eventually realizes that his hyperfocus on jazz blinded him to smaller opportunities for joy along the way. Just like many of us, 22 feels frustrated not knowing her spark and gets tired of her purposeless existence in “The Great Before.” By occupying Joe’s body and exploring New York City, 22 lives like a human for the first time, difficult but fun. She realizes that she doesn’t need to be that guilty for not knowing what she should be good at, and eventually learns to be fulfilled by enjoying life’s smaller moments.

Though 22 is only one in countless unborn souls and Joe is just one small figure in the metropolitan sprawl of New York City, audiences can resonate with the main characters because we are, after all, common human beings. “Soul” presents Joe and 22 as exemplars of the human condition, making it easy for audiences to identify with them and the film’s overall message: that our life purpose is not solely about excelling in one skill, becoming an important figure or making others admire us. There are still small things we can enjoy, between daily hassles and hardly reachable dreams: a piece of improvised music at the subway station, a golden piece of maple seed falling down from treetop, and even giggles of children across the street. We may find these simple moments neglectable and being “just regular old living,” but really, these are the things that make us whole.

I am glad that this film came at the end of 2020, a very troublesome and unpredictable year that undoubtedly made people around the world acutely aware of loss and mortality. “Soul” inspires us to contemplate ourselves and those around us, while offering an excellent jazz soundtrack and visually stunning landscapes and skilled voice acting. I highly recommend “Soul” to people of every age group, as people may have unique reflections based on their own life experiences.