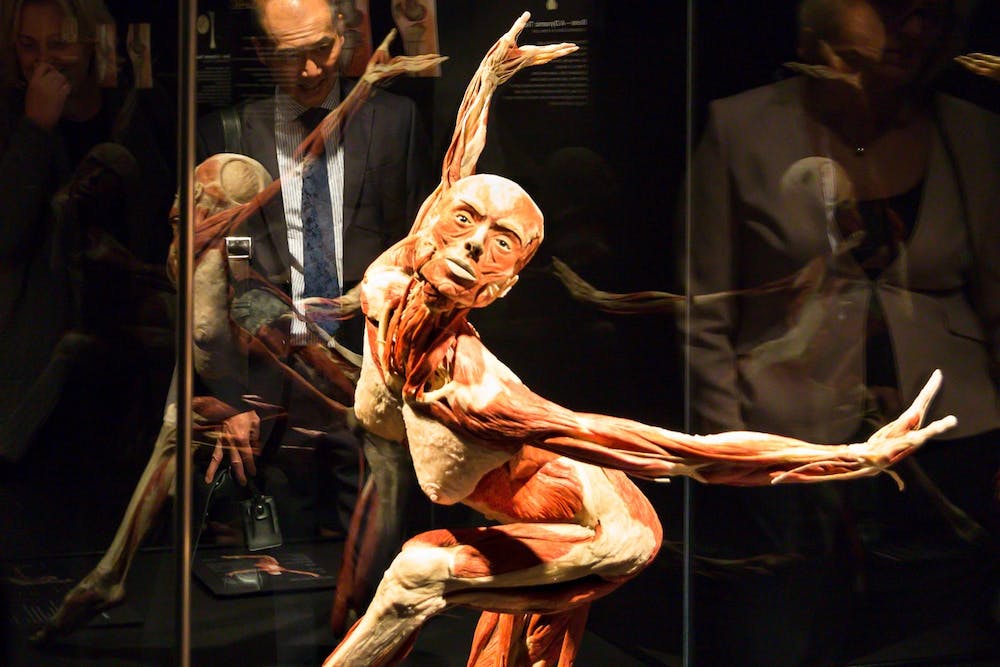 Pre-med students, look no further — the perfect human anatomy class is on display at the Houston Museum of Natural Science. “Body Worlds & The Cycle of Life” is an exhibition that reveals the inner workings of the human body, and illustrates how various healthy and unhealthy lifestyles can impact our bodies. Now making its third return to Houston, the exhibition displays more than 100 real human specimens, including skinned corpses and human organs.

One of the most striking features of this exhibition is complete plastinated human bodies Invented in 1977 by German anatomist Gunther von Hagens, plastination is a technique for preserving biological organisms that involve replacing their natural fluids with liquid plastic, which allows the specimen to be studied in various positions.

An introductory note in the exhibition hall states that all exhibits included authentic human bodies of people who consented to participate in this program in order to educate the general public on human biology.

True to its name, “Body Worlds” chronologically follows the circle of life by beginning with exhibits about pregnancy and birth. The rest of the exhibition features full-body plastinates, each serving a different educational purpose. The extent to which plastination can preserve the details of human bodies is astonishing — muscles, nails and even traces of blood vessels can be seen clearly on all the models. In addition, all plastinates were accompanied by didactic text and diagrams with medical terminology for better understanding.

The first plastinate I saw during my visit to the exhibit was “Tai Chi Man,” a body posed in a position used in the internal Chinese martial art and meditation practice of Tai Chi. This position prominently displayed the stainless steel screws, wires and plates throughout his body, likely the result of many orthopedic and surgical operations. I even noticed a pair of artificial knees, a testament that our bones are not as strong as they appear to be and sometimes can never be healed naturally. Modern medical techniques, however, make the scattered become whole again.

Among all the plastinates, I was most impressed by “Skin Man” which illustrated human skin anatomy. “Skin Man” stood up straight and glanced at his outstretched right arm, where his own skin was dissected into two halves: anterior and posterior. Traces of hair and hair follicles were visible all over his whitish skin. Having never seen human skin separate from the body before, I felt both amazed and unsettled. I realized that I know little about my skin, though I am in constant contact with it.

Aside from the awe-inspiring full-body exhibits, “Body Worlds” also has smaller body parts, such as hands, feet and spines, on display. Other multimedia presentations shed light focused on human pathologies and mental illness, utilizing visuals like brain tissue slides from a late-stage brain tumor patient. One video about the mechanism behind dementia illustrated why physical exercise could slow the process of cognitive decline. Another video deepened my understanding of coronary heart diseases through its detailed animation on how plaques blocked the blood flow of arteries. All these multimedia exhibits bring awareness to common health problems in a vivid, artful way.

In addition to offering biological knowledge, the exhibit also provides cultural perspectives on health and death. In ancient Europe, for instance, it was widely believed that the dead would escape from their resting places during nighttime. This frightening superstition was vividly illustrated when curators put a body right in the middle of the exhibition hall, staged to appear as if he were running away from his tomb with a shroud in hand. The exhibit also pointed out how bodily ailments can impact high culture and fine art. Claude Monet painted “The Japanese Bridge at Giverny” (1918-24), which features a very vague, orange-colored bridge,  when he was diagnosed with cataracts, meaning he could only see objects 20 feet away from him.

I was so immersed in the exhibits that I did not even realize that I was back at the entrance again After learning so much about the complexity of human anatomy and the permanent impacts of external forces on our bodies, death feels like less of a mystery.