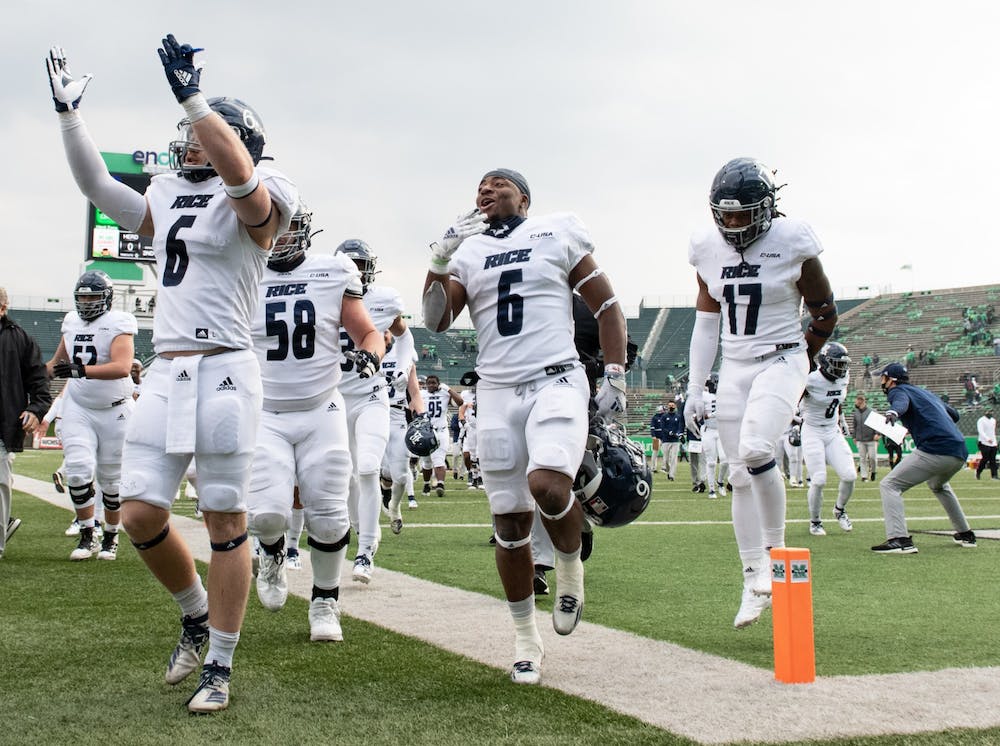 During a season with a missed quadruple-doink field goal and a victory over a top-ranked team in the nation, the Rice football season is officially over after a 21-16 loss to the University of Alabama, Birmingham. Finishing with a 2-3 record, the Owls were one win shy of a bowl game bid. The season was defined by its ever-changing schedule, but head coach Mike Bloomgren did not anticipate adding another game to the schedule.

In what can only be described as a chaotic season, the Owls were one quadruple-doinked field goal away from their first bowl game appearance since 2014. Senior tight end Jordan Myers expressed a twinge of sadness about the loss, as this might have been his last chance to reach a bowl game.

“Having the opportunity to go to a bowl game, having it in your fingertips, and watching it slip through your hands, it’s tough,” Myers said. “But I’m proud of this team, we’ve come so far, but I also know we have a long way to go.”

The Owls faced enormous setbacks over the course of training camp and into the start of their season. Following a few cancellations, Rice announced in August that they would delay the start of their season until late September. Late September turned into early October, and finally the season opener was pushed to Oct. 24. Throughout that process, the Owls had been delaying the start of practices as well. Workouts usually start in June, but they weren’t able to get onto the field as a team until the end of September. Bloomgren said he was very proud of how the team dealt with adversity presented by the shifting start dates.

“I remember how badly we wanted to start workouts, but we had to figure out the best way to do it safely,” Bloomgren said. “I’m proud of this group of guys, who’ve done everything we’ve asked [of them] since June. Every protocol, every selfless decision they made so we could play this game together.”

Rice finally began their season on Oct. 24, against Middle Tennessee State University. Rice erased a 12 point deficit in the fourth quarter, thanks to an improbable 48-yard completion from graduate quarterback Mike Collins to senior wide receiver Austin Tramell on a 4th and 28. That play was followed by another Collins to Trammell connection, leading to a touchdown and forcing overtime. In OT, Rice had an opportunity to win the game on a 45-yard field goal attempt by graduate kicker Collin Riccitelli. However, Riccitelli’s kick bounced off of the uprights four times before eventually falling short. Rice lost the game on the next possession, a 14-yard touchdown run by MTSU quarterback Asher O’Hara sealed the Owls fate and handed the Blue Raiders a 40-34 victory.

The next week, the Owls beat the University of Southern Mississippi, by a score of 30-6, behind four touchdowns from Collins, three of which went to Trammell, and a strong showing on defense.

Rice looked to build off of their strong showing against Southern Miss. However, the next two games on their schedule, against the University of Texas, San Antonio, and Louisiana Tech University, were canceled due to COVID-19 cases within the opponents’ program.

The Owls finally resumed their season on Nov. 21, against the University of North Texas. Rice jumped out to an early 10-0 lead, and had outgained the Mean Green by over 200 yards through nearly a quarter and a half. The tide turned on a 66-yard touchdown run by North Texas quarterback Jason Bean. From there, North Texas scored 27 points unanswered to put the game out of reach. Rice was shutout for nearly the entire second half, until a last-second touchdown made the final score 27-17. After the game, Bloomgren was succinct in his comments about the team’s performance.

“We started off the game as well as we could [have],” Bloomgren said. “For ten minutes, we played our kind of football, and did the things we needed to do. Then I have no idea what switched, but we quit doing our jobs, and quit doing the things we were supposed to do.”

Rice looked to rebound from their loss to UNT the next week, when they were scheduled to face the University of Texas, El Paso, but that game was eventually cancelled due to COVID-19 cases within the UTEP program.

Rice turned to their next opponent, undefeated Marshall, then ranked the No. 15 team in the country by the AP. Marshall entered the game averaging 37.4 points per game, and beating their opponents by an average of over 27 points. Rice went on the road and shut out Marshall, winning 20-0. In addition to holding Marshall scoreless and forcing five turnovers, the Rice defense got a score of their own, when senior safety Naeem Smith returned one of Rice’s five interceptions on the day for a touchdown. Rice’s offense, led by redshirt freshman quarterback JoVoni Johnson who was starting in place of the injured Collins, tacked on 13 points of their own to secure the upset. The Owls entered the game as 24-point underdogs, in what was their first win over a ranked opponent since 1997.

“This is the way we believe we can win games,” Bloomgren said of his team’s performance against Marshall. “Play a physical style of football with a great defense, pound the rock and control the clock. When the defense is playing like that, it makes everything better.”

Following the upset, Rice closed out their season against the University of Alabama, Birmingham on Saturday. Rice got out to an early lead, and went into halftime up 13-7, but two long touchdown passes from UAB quarterback Tyler Johnston in the first five minutes of the third quarter gave UAB a 21-13 lead. Rice, still playing without Collins, was unable to take the lead back, and lost 21-16. The loss dropped the Owls to 2-3 on the season, putting them out of contention for a bowl game.

Throughout the season, the Owls relied on their talented defense that kept them in every game. Led by captain and senior linebacker Blaze Alldredge, Rice finished the regular season with third best defense in Conference USA. Alldredge said he was impressed with his teammates’ work ethics throughout the season.

“For this season, what I’m going to remember most is the ‘go to work’ mentality of this team,” Alldredge said. “With so many uncertainties, with all the pushbacks, late-starts, the injuries, we never made excuses. Everybody, every day, we showed up and went to work.”

In addition to his players, Bloomgren acknowledged defensive coordinator Brian Smith, and the whole coaching staff, for their preparation throughout the season.

“Brian did a wonderful job this year with the scheme,” Bloomgren said. “I’m so pleased with what he’s done, what he’s put on film and made people prepare for. The calls I get from other coaches in this conference make me laugh: ‘You know had your safety lined up at noseguard, Coach.’ And I’m like ‘yeah, we did.’”

The intricacies of their defensive lineups, along with the constant shifting of their schedule, made the 2020 season one to remember for the Owls. After watching his team interact over the past few months, Bloomgren said he was blown away by the level of commitment his players had to keeping each other safe.

“I don’t know if anyone did it better in America, in terms of [being] safer for their kids, [than our program],” he said. “To my knowledge, we didn’t have a single case passed in the building, and it all comes down to these players making the right decisions.”

Players said those decisions were due to the bond that has been built within the locker room over the past few seasons.

“There’s been a huge change in culture over my time here,” Alldredge said. “We have a lot more confidence … Plays that would have rattled us before, that would have turned us against each other, those don’t happen anymore.”

Myers agreed, adding that the team feels a lot more like a family than it did when he first arrived on South Main, as a freshman.

“The family environment we’ve created over these years, when I was younger we didn’t have that culture,” Myers said. “I’m even closer with some of the younger guys than I am with some of my own classmates. We’re just one big, happy family.”

Individual Owls now face some tough decisions, as star players will decide whether or not to return next season. The NCAA ruled that the 2020 season does not count against student-athlete eligibility, so seniors like Trammell, Myers and Alldredge will have to decide their next career moves.

“We’ve all had some conversations, and in most cases, we elected to kick the can down the road,” Bloomgren said regarding his potentially departing seniors. “Those guys are wanted, but I want it to make sense for them too … If they want another year, gosh, I want them back.”

But as seniors leave, new faces will join the program as well. The Owls currently have the fourth-best 2021 recruiting class in C-USA. Alldredge said that those new additions, plus an already talented roster, spells success for the future.

“In terms of what I’ve accomplished at Rice, I think that’s going to be best reflected by the years to come,” Alldredge said. “We have a talented linebacker room, we have some guys that hopefully, in a couple of years, will make you forget about Blaze Alldredge. I’m excited to see what they do, and what this program does.”

Despite the positive outlook for the future, Bloomgren said there was something special about this year and this team.

“I really wanted to keep playing with this team,” Bloomgren said. “I was ill-prepared for this [season to end] ... I think 2020 made us realize what’s important in our life, and made us appreciate some things that we took for granted. I wish spring ball would start next week.”