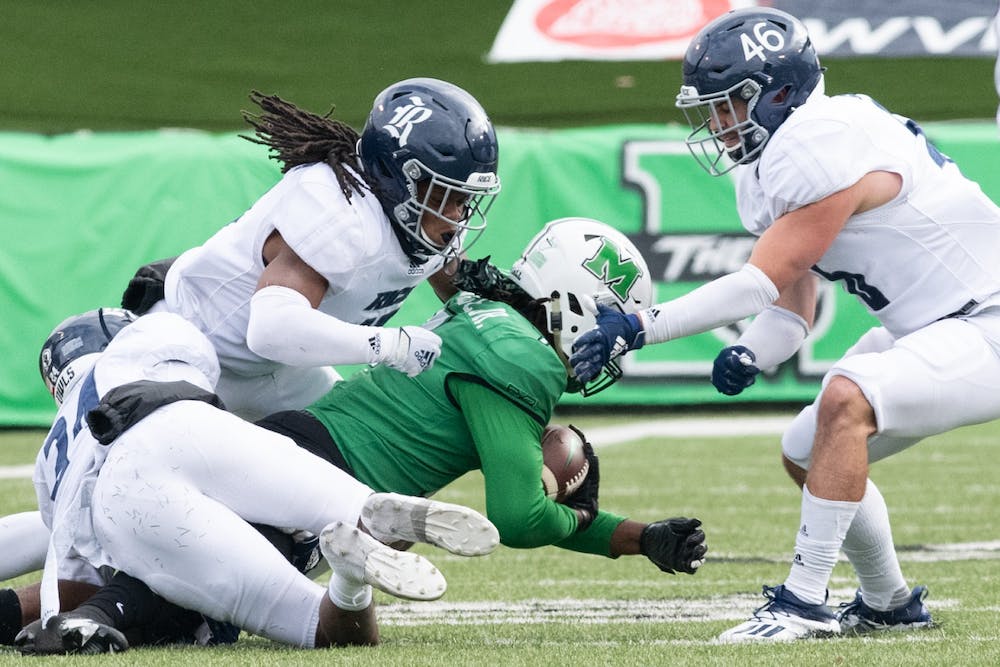 “I can’t remember the last time I’ve been more proud of a team,” Rice head coach Mike Bloomgren said. “What our defense did — the five takeaways, the shutout — we were exactly who we wanted to be.”

“This is the way we believe we can win games,” Bloomgren said. “Play a physical style of football with a great defense, pound the rock and control the clock. When the defense is playing like [they played today], it makes everything better.”

The stats from this game paint an interesting picture. The Herd had more total yards than the Owls, 245 to 213, and more first downs, 19 to 17, but their downfall was turnovers. Marshall’s redshirt-freshman quarterback Grant Wells threw five interceptions in total, having thrown only a total of four in the seven games previously played this season.

“It’s contagious,” senior linebacker and captain Blaze Alldredge said of the interceptions. “When we play with juice, and with confidence, there’s plenty to go around.”

Alldredge, who finished the game with 10 tackles and one of the five interceptions, said this game was an example of how good their defense can be.

“I don’t think we’ve ever doubted that this is who we should be,” Alldredge said. “[Marshall] goes out, they execute, and they expect to be better than you ... They acted like they were better than us, and we showed them today that they’re not.”

The play of the day was a pick-six, an interception returned for a touchdown, by senior safety Naeem Smith. After missing the first three games this season with a hamstring injury, Smith returned a third-quarter interception 36 yards to the endzone, putting the Owls up by 20 points.

“When you’re on the sideline [as a quarterback] and see points go up on the scoreboard, that may be one of the best feelings in the world,” quarterback and redshirt-freshman JoVoni Johnson said of the pick-six.

Smith’s teammates and coaches praised Smith's work ethic and said they were proud of his ability to fight to get back onto the field this season.

“Naeem is a guy that I don’t think gets enough credit,” Alldredge said. “No one prepares better than him. He deserves this and so much more.”

Smith, however, was quick to credit the coaching staff and his teammates. He said that the preparation for this game is what allowed for such a dominating performance.

“Marshall is a pretty simple team, they don’t try to trick you,” Smith said. “But they’re a physical team, and they say, ‘you just can’t stop us.’ Today we saw some of the same tendencies, they didn’t really change much. And you can see that we really prepared, both physically and mentally.”

Although much of the attention has been paid to the Rice defense's performance, the Owls' offense also overcame hurdles before they got onto the field. Graduate quarterback Mike Collins and senior wide receiver Austin Trammell, the Owls’ two biggest offensive weapons, both missed this game due to injuries unrelated to COVID-19.

Backup quarterback JoVoni Johnson stepped into the starting role, completing 10 passes on 14 attempts for 86 yards. Bloomgren praised the play of the young quarterback, who hadn’t thrown a pass yet this season.

“JoVoni did a great job pushing the ball, getting it out of his hands,” Bloomgren said. “He was on top of everything [this week], and you saw him go out there and execute at a pretty high level.”

Johnson appeared in four games, starting one of them, for the Owls last season. His one start was against Marshall. He said that stepping into the starting job this year, with the opportunity to upset a ranked opponent, was something he’d always thought about during high school and his first year on the team.

“[This game] is almost everything you can hope for,” Johnson said. “When your number gets called, it’s all about how prepared you are. I felt that throughout the week, with the game plan we put together and the group of guys surrounding me, it gave me all the confidence in the world that we could go out there and be successful.”

Despite the momentous occasion of the game, Johnson said that he wasn’t that nervous as he stepped out onto the field.

“I felt nervous about the game when they first told me I was starting,” Johnson said. “But after the week of practice, I felt so confident. [Last night,] I laid down with some cookies and some sour Skittles, and went to sleep.”

The final factor leading to the Owls' victory was redshirt-sophomore Ari Broussard. After making his debut at running back earlier this season, Broussard led the Owls in rushing with 62 yards on 19 attempts.

“Ballplayer” is an apt descriptor, as Broussard has seen playing time at numerous positions. Originally a walk-on linebacker, Broussard saw a lot of time on special teams before he went to his coaches and asked if he could try his hand at running back.

“I’ve been playing for so long, trying to prepare the right way, I knew eventually that I’d be able to start and make a difference on the offense,” Broussard said.

Sharing space in a crowded backfield, Broussard spent a lot of time in practice on the scout team (the players whose task is to emulate future opponents to help prepare the Owls’ defense). Broussard said that the countless practice reps he got against his formidable defense allowed him to mature as a player.

“The game has slowed down to me, at this point,” Broussard said. “It’s not as fast as it was when I was a freshman or a sophomore. It’s slow, I can read things better and I see things differently.”

When he was finally given his chance to shine, Broussard did not disappoint. Bloomgren talked about how much improvement he has seen from Broussard over the course of his career.

“The coolest thing about Ari is the trust he’s earned from us,” Bloomgren said. “With the game on the line, he’s proved to us that he will possess the ball at the end of the play.”

Bloomgren allowed him to do just that, with Broussard carrying the ball 12 times in the fourth quarter as the Owls ran down the clock to victory.

Next week, Rice will finish their regular season at home against the University of Alabama at Birmingham.