One and done: XC completes season with C-USA Championship 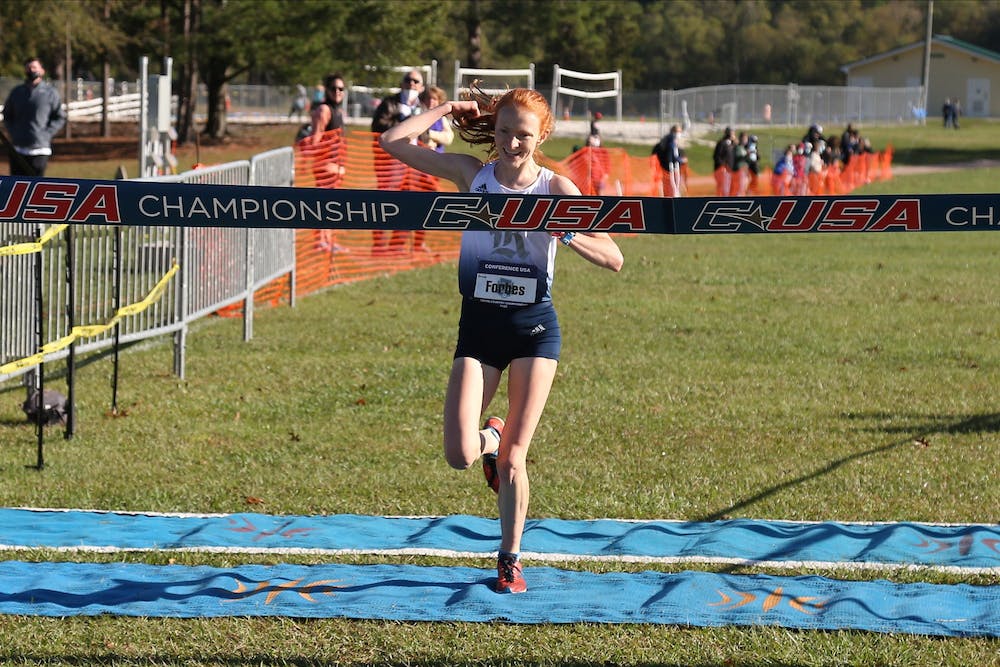 The Rice men’s and women’s cross country teams began and ended their season on Saturday when they competed in the Conference USA Championship, their first and only meet of the season. The men’s team finished third overall, and the women finished fourth. But the story of the day was sophomore Grace Forbes, who became just the third Owl in the history of the program to win an individual conference title.

“Grace works hard, is focused and determined,” Jim Bevan, women’s cross country head coach, said. “She is very humble and on race day knows how to challenge her body. She is already an All-American as a freshman (indoor track last year) and continues to improve.”

Forbes finished the 6k race in 19 minutes and 58 seconds, nearly a full minute ahead of the closest runner. That finish qualifies her to compete in the NCAA Championships, which will be held in March of 2021. Last year's C-USA Freshman of the Meet, Forbes said that she couldn’t even begin to think about this meet until late the night before.

“I had a crazy hard week in terms of school, ending with a physics exam last night at 8:30, so I wasn’t able to mentally prepare until about 9 p.m.,” Forbes said. “About a mile in, I heard Coach Bevan tell me to try and break 20 minutes, and that’s when I knew that it would be a race against the clock.”

Forbes was followed by freshman Taigen Hunter-Galvan, who also earned all-conference honors with her 21st overall finish (22:32). Hunter-Galvan was followed by sophomore Rachel Shoemaker (22:36), who placed 24th, nearly missing all-conference honors. Bevan said he is proud of the way his team competed, especially considering they had not had another race this season.

“[I was] just hoping to compete well as it was our first and only meet of the year,” Bevan said. “We did compete exceedingly well and I’m proud of them. Everyone we raced against had at least one or more race this year and had some sort of normalized season.”

Over on the men’s side, the Owls finished in third place for the fourth consecutive year. Senior Hociel Landa placed fourth overall in the 8k race with a time of 24:11.73, the highest individual finish by an Owl at the C-USA Championships since 2005.

“The meet went very well, especially Hociel,” Jon Warren, the men’s head coach, said. “That fourth-place finish is the best Rice finish in many years and he mixed it up and even beat some truly outstanding runners. Then the other guys packed very well with four total earning all-conference honors. A good, good day.”

Warren agreed with his counterpart, that more of a season would have been beneficial to his team. Still, he said he is pleased with the results.

“Having this be the only race in the season definitely makes expectation settings a challenge,” Warren said. “I think having a season would have been helpful and the guys absolutely ran well considering the uniqueness of everything. I think third place is a great finish. I was hoping for a high finish and I’m happy with the way it turned out.”