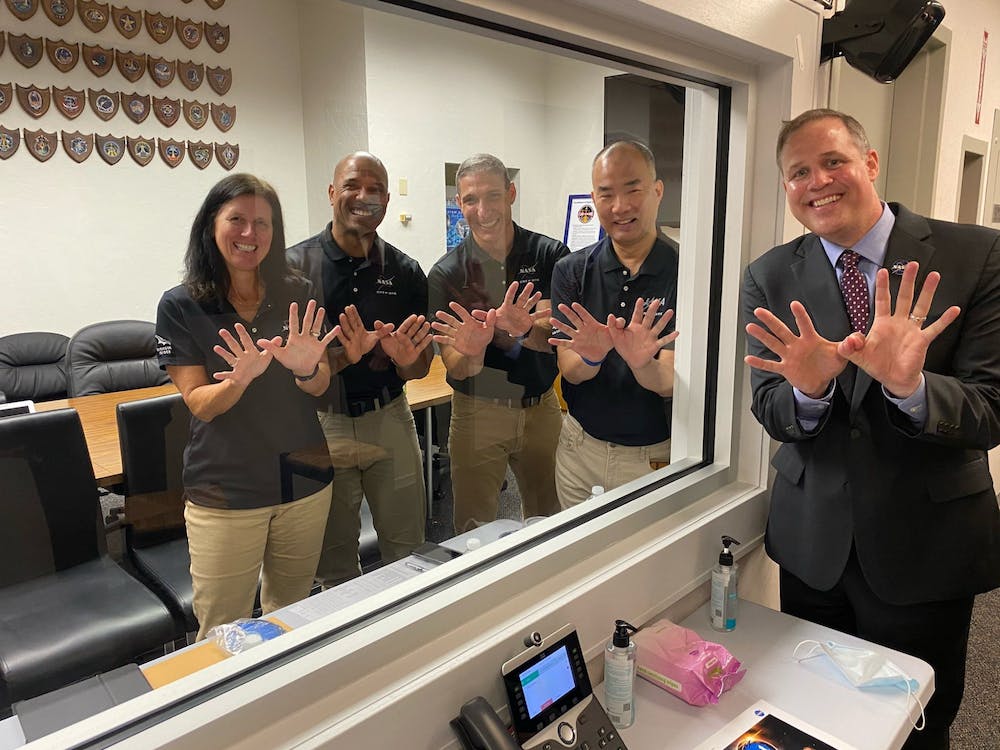 Shannon Walker, Baker College ‘87, MS ’92, Ph.D. ‘93 is one of the four astronauts on NASA’s SpaceX Crew-1 mission to the International Space Station. The Crew Dragon spacecraft launched on Sunday evening and arrived on Monday night at the ISS, where the crew will spend the next six months, according to NASA. This is Walker’s second space flight to the ISS.

Crew-1’s journey to the ISS is the first routine commercial space flight, according to NASA. Walker, a mission specialist on Crew-1, is the first woman to fly to orbit on a commercially-operated spacecraft. She is also the first Houston-native astronaut and the only astronaut ever with bachelor’s, master’s and Ph.D. degrees from Rice, according to Associate Director for Public Outreach at the Rice Space Institute Patricia Reiff.

“She’s a Rice product through and through, with three Rice degrees,” Reiff, a physics and astronomy professor, said.

“We found that a number of students who came over from the Air Force or from NASA had a really finite time frame [for their studies],” Reiff said. “They really had to finish quickly … and [Walker] did it remarkably.”

Reiff, who was a faculty member during Walker’s undergraduate and graduate career, said she saw Walker’s positive spirit and camaraderie with other graduate students.

“I was always impressed with her dedication, her skills, her attitude,” Reiff said. “She was a tremendous student but also very much a partner with all the other students.”

Paul Cloutier, professor emeritus of the physics and astronomy department, was Walker’s thesis advisor during her master’s and Ph.D. He said that she had the key qualities he sought in a Ph.D. candidate.

Walker wrote her doctoral thesis on the interaction of Venus’s atmosphere and solar wind, according to Reiff. Cloutier, who was researching the Pioneer Venus project at the time, said that Walker’s work proposed an alternate explanation for the electromagnetic bursts from Venus purported to be lightning — a controversial issue for 40 years.

“She worked on a problem that was very topical and also a fairly substantial issue across a broad spectrum of scientific disciplines,” Cloutier said.

Walker’s dream to become an astronaut began when she was a child, according to Reiff, and she applied for the position several times before she was accepted. Multiple applications for NASA’s astronaut program are not unusual, Cantu said; Rice alumnus and astronaut James Newman (MA ’82, Ph.D ’84) also applied five times, according to Cantu. Cloutier said that he has kept in touch with Walker over the years and is continually inspired by her energy and persistence.

“So when she decides to do something, she does it flat-out. And that’s the story of her career,” Cloutier said. “She didn’t accept five rejections. She just kept on keeping after it until she finally got what she was looking for.”

“I was very impressed by [Walker] as a person and by her strong affection for Rice,” Dunning said.

On campus, Students for the Exploration and Development of Space Rice and Rice Eclipse hosted one watch party, and Baker College hosted another, according to SEDS president Ryan Udell. The Rice Space Institute hosted an online watch party for the Crew-1 launch in support of Walker. Reiff said she would be praying for a safe journey and successful mission.

“It’s still a dangerous game, and it takes a lot of courage to put yourself on the top of all that explosive material,” Reiff said. “The launch is the most dangerous [part], followed by the landing. Once you’re up there it’s not so much of a problem.”

Walker is an active alumna and has given talks at Rice such as a lecture in a continuing studies course on Women in Space. Cantu said Walker is interested in educating women and young girls and always willing to participate. She was voted for the 1990s decade award at the Space Science Alumni 50th anniversary reunion, which she attended, according to Cantu.

“I think she’s just a great example that you can follow your dreams [and] that if you have a goal and you have the ability and you have the energy, you can get where you want to go, even if it’s outer space,” Reiff said.

Walker is one of the 17 women among NASA’s 47 active astronauts. Udell said that Walker is very visible in this new era of commercialized space flight and that SEDS, along with the Rice chapter of the Society of Women in Space Exploration, fully supports her.

“It just shows the true capabilities of Rice alums to be able to really explore and develop space and inspire millions,” Udell, a McMurtry College senior, said. “If you want to become an astronaut — we’ve had 14 of them — you can become an astronaut.”

Walker will participate in a news conference live from the ISS at 8:55 a.m. CST on Nov. 19, according to NASA.

[11/18/2020 9:27 p.m.] This article has been updated to reflect that Shannon Walker is the first woman to fly to orbit on a commercially-operated spacecraft.