Owls return after week off to battle Bulldogs 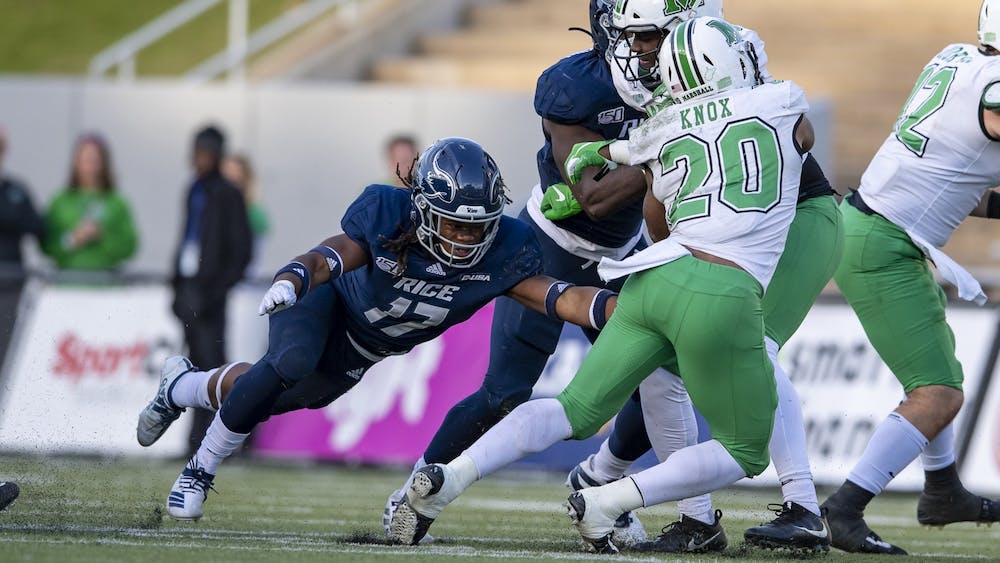 Rice will take on Louisiana Tech University this Saturday in Ruston, Louisiana. The Owls enter the game with a record of 1-1 on the season. In their first game of the season, Rice lost in double-overtime to Middle Tennessee State University. However, they followed it up with a 30-6 win over the University of Southern Mississippi.

Last Saturday, Rice was scheduled to host the University of Texas at San Antonio. However, on Friday it was announced that the game would be postponed due to positive COVID-19 tests within the UTSA football program. Instead, Rice got an unexpected bye week. According to Bloomgren, these sudden changes have forced the team to adjust.

“We all love the rhythm of a college football season, we love the routine,” Bloomgren said. “But 2020 has been anything but routine, and something we’ve asked our players for is flexibility and adaptability.”

Meanwhile, Louisiana Tech enters this game at 4-3. Their 3-2 record in Conference USA games has them in second place in the conference’s west division, and fifth overall. Two of their three losses have come against opponents ranked in the top 20 by the AP. However, three of their four wins have been by four points or fewer. This week, the Bulldogs are in a similar position to Rice, as their game last week against the University of North Texas was also postponed due to COVID-19-related issues.

This is the Bulldog’s eighth season under head coach Skip Holtz, who is the son of former longtime University of Notre Dame head coach Lou Holtz. They are coming off of a season in which they finished 10-3, and tied for second place in the C-USA with a 6-2 conference record. Bloomgren said he admires the job that Holtz has done.

“I’ve got so much respect for the program that Coach Holtz has built there,” Bloomgren said. “LA Tech has been about as consistent of a team in our conference as there is.”

On defense, Rice will be tasked with stopping the second ranked passing offense in the conference. The Bulldogs are led by graduate quarterback Luke Anthony, who leads C-USA quarterbacks with 13 touchdowns. Ten of those came in their first three games, while he has managed only three touchdowns over their last four games. According to Bloomgren, the key to stopping LA Tech’s explosive offense will be focusing on their weapons.

“They just find a way to score points,” Bloomgren said. “[Redshirt senior receiver Adrian] Hardy, [who’s] from right here in the Houston area, is exceptional. He’s a guy that we have a lot of respect for. [Redshirt sophomore receiver and kick returner] Smoke Harris, is a known commodity in this league as a returner, he’s also explosive any time he gets the ball in his hands on offense.”

While Rice’s pass-defense allowed 333 passing yards to MTSU in their first game of the season, they held Southern Miss to only 169 yards through the air the next week. According to Bloomgren, the Rice pass defense should be helped out this week as a number of key players are set to return from injury, including junior linebacker Treshawn Chamberlain and sophomore safety Kirk Lockhart.

Rice’s offense will look to exploit a LA Tech defense that has allowed 30 or more points in five of their seven games. Led by graduate transfer quarterback Mike Collins and senior receiver Austin Trammell, Rice has thrown for 237.5 yards per game. Collins ranks tenth in the FBS in passer rating, a passing efficiency metric, thanks in part to his eight touchdown passes through two games. This has offset their rushing attack, which, led by redshirt sophomore running back Juma Otoviano, has added 181 yards per game on the ground.

The strength of LA Tech defense is their ability to stop the run. They’re ranked sixth in the conference in the conference in run defense, spearheaded by the linebacker tandem of freshman Tyler Grubbs and redshirt senior Trey Baldwin, who are tied for the conference lead with 10.7 tackles per game. Offensive line coach Sanders Davis said that Rice will have to be prepared for LA Tech’s aggressive defensive line as well.

“They play with great effort,” Davis said. “They’re not guys that you can get your hands on and [expect them to] stay in that same place for the rest of the down.”

Last year, the two teams met in Houston. After Rice got out to an early lead, LA Tech came back to win in overtime by a score of 23-20. LA Tech has won the last six matchups between the two teams.