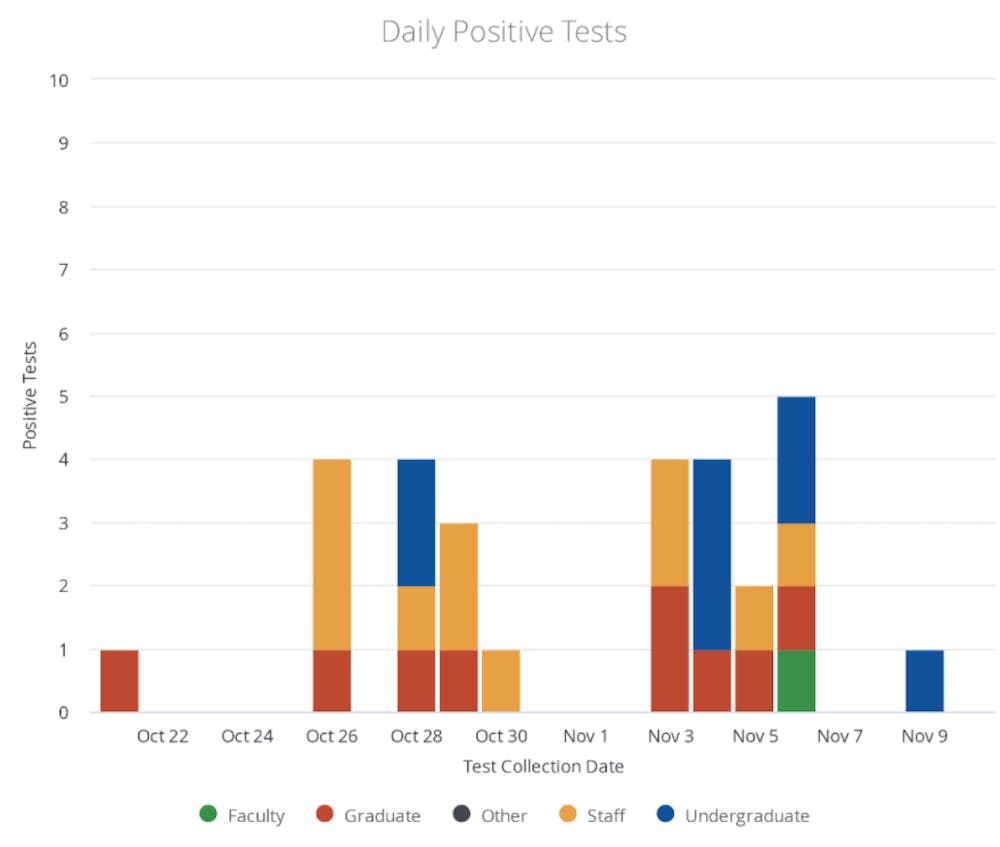 The second-highest number of weekly positive tests was seen during the previous week. Between Oct. 27 and Nov. 2, Crisis Management reported 12 positive tests plus one self-reported positive test from an outside test provider that week, for a positivity rate of 0.3 percent.

Kirby said in the COVID-19 Response Weekly Update for Nov. 9 that the Rice positivity rate increased to 0.3 percent for each of the past

“These numbers are a reminder that we must stay vigilant both on and off campus and engage in personal health practices that protect ourselves and others,” Kirby wrote.

On Oct. 30, there were 19 positive tests, 17 of which were found to be false positives, from one of Rice’s test providers. Jerusha Kasch, director of Institutional Crisis Management at Rice, said at the Student Association Senate meeting on Nov. 2 that it was an extremely high number of positive tests.

“We have never received 20 positive results in one day, much less than one week, so we were very concerned when we had those,” Kasch said.

“We’re pretty certain [the source of the spread] is off campus,” Kasch said of the increase in positive cases at McMurtry.

According to Kirby, the difference between testing at Rice and testing in the greater Houston area is that, in general, the majority of positive tests at Rice are from asymptomatic cases.

“For the people who are testing in the greater Houston area, it’s not easy to access testing. Most people are motivated to get a test when they’re symptomatic,” Kirby said. “They’re not testing asymptomatic people, generally, as much as we are, so we’re catching people who either would never know they had COVID or catching it before they become symptomatic.”

Kirby said that in the coming months, as people spend more time indoors and they spend more time together over the holidays, it will continue to be important to maintain health practices.

“Don’t let your guard down. Because it’s pervasive, you should assume that you’ll encounter it with family members, at the grocery store, with other people, and you need to keep your distance, you need to wear a mask all the time,” Kirby said. “Wearing a mask all the time is the single most important thing you can do. People are getting fatigue, COVID fatigue, from all of these different changes in how they live, and we really can’t let our guard down, especially over the coming months.”