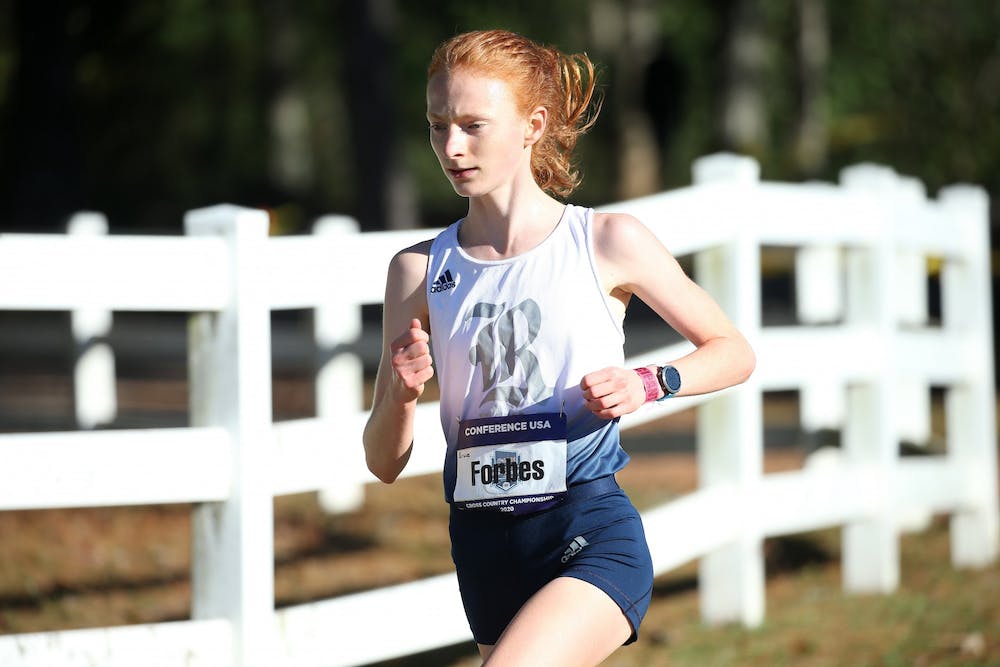 Many of us, especially in these trying times, find ourselves being thankful for the support our family provides us. For sophomore cross country star Grace Forbes, family is everything. Forbes, who became just the third Owl in school history to win the Conference USA Championship Individual Title last weekend, said her family is the driving force behind her success.

“I’m a very big family person,” Forbes said. “I’ve found a deeper passion for running ... that’s definitely intensified as time has gone on, and I attribute that to my family’s support.”

Her sister, senior Madeline Forbes, also runs track and cross country at Rice. Forbes said that having her sister with her has provided an extra layer of support.

“My sister Maddie is my biggest support system,” Forbes said. “She’s really the best. Whenever I’m having a tough time with school, she’s always been there. Whether it’s going to get a scoop of ice cream or being a shoulder to cry on, she’s always there.”

Forbes also said that Maddie had a large influence in her decision to come run with the Owls two years ago.

“[Maddie] played a pretty substantial role in my decision [to come to Rice],” Forbes said. “If my sister hadn’t gone, I wouldn’t have even known about the school. But she loves it here, and she was living proof that I’d be happy coming down here.”

Since arriving on campus, Forbes has taken C-USA by storm. She won the indoor mile and 3000-meter races at the C-USA Indoor Championships last February, and was named a 2020 NCAA Indoor All-American as a freshman.

“I had a spark of motivation going into freshman year,” Forbes said. “I really wanted to prove to my family, other teammates and myself that I deserve to be here. I know I can succeed both athletically and academically here at Rice, and I think all those things culminated into helping me train harder and smarter.”

Although Forbes had the drive to succeed from the start, she credits much of her performance to the coaching at Rice, including women’s track and cross country head coach Jim Bevan, for providing a support system while also challenging her.

“A lot of my success has come from having an amazing coach and support system,” Forbes said. “Coach Bevan puts in a lot of hard work to every one of his athletes, and that’s a very strong component of what’s helped me perform.”

Forbes picked up right where she left off from last year at the C-USA cross country championship meet this fall. She finished the 6k race in 19 minutes and 58 seconds, nearly a full minute ahead of the next closest runner. Forbes said that while her times are obviously important, they aren’t specifically on her mind as she heads into a race.

“I don’t like to put a time goal; if you just stick to beating numbers it turns into more of a mental game,” Forbes said. “My main goal going into each race or practice is just to improve on last time’s performance, whether that’s feeling better, finishing stronger or getting a better time.”

Despite approaching every race with the intent to perform better, Forbes said her improved performance and decreasing times were not something that she totally expected.

“I didn’t really think that my times could go down as much as they have, if I’m being honest,” Forbes said. “You can ask my parents, they were definitely not expecting it either.”

Forbes’ finish in the C-USA championship qualified her to compete in the NCAA Championships, which will be held in March 2021. She competed in this race last year as well, placing No. 87 with a time of 21:10. Her 6k from the C-USA championship this fall, 19:58, would have landed her in third place at last year’s NCAA championship. Forbes said that although she doesn’t ever compare her times to those of other runners for big meets, the same cannot be said for her family.

“I’ve got a few fans at home — my uncles are really into statistics, so sometimes they shoot me an email comparing me to the other race times,” Forbes said with a laugh.

Forbes’ “fans at home” are a big reason why she has ended up where she is today. She grew up in a family of athletes; both of her parents were runners, and her younger sister Maggie recently committed to run at Rice next year as well. According to Forbes, her biggest family inspiration is her grandfather.

“He was the hardest worker you’ll ever find, and he gave the best life to his children. I really wanted to embody his spirit and drive,” Forbes said.

Her grandfather was also a runner, and her father’s role model. He passed away when she was six years old, and Forbes said that she wears one of her grandfather’s old sweatshirts before every race she runs.

“Wearing his sweatshirt makes me feel like part of him is with me at the races,” Forbes said. “I think I will continue to wear the sweatshirt at every race, forever ... I’ll wear it until it breaks down, and I’ll find something else to do with it after that.”