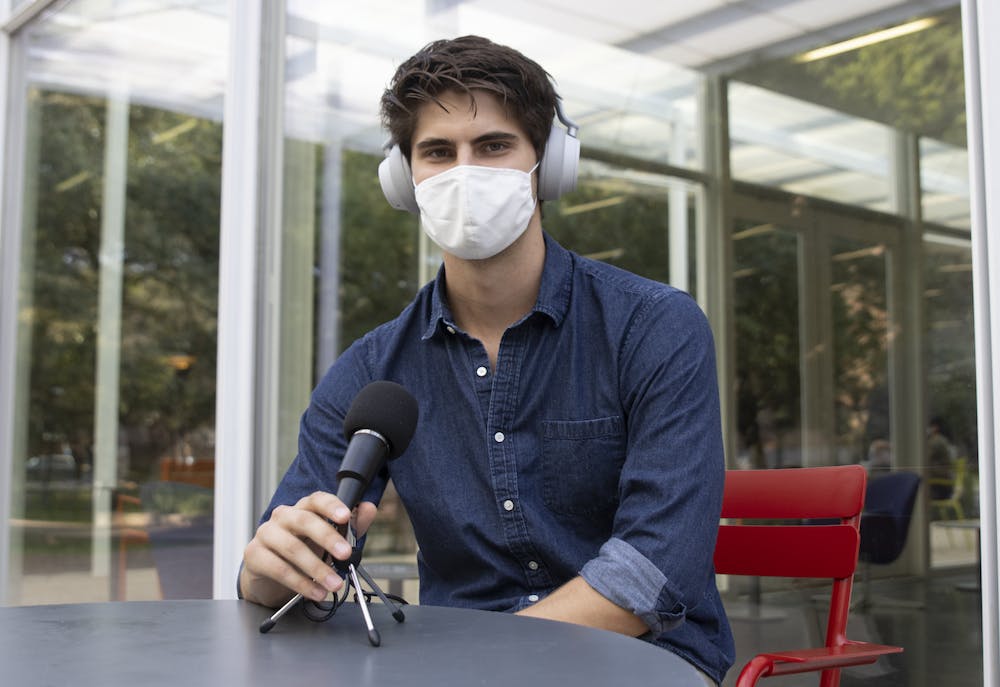 Spontaneous Combustion, Rice’s improvisational comedy group, has had one goal since 1995: make people laugh. This year, due to the pandemic, SpoCo will be bringing their humor to people’s headphones for the first time ever with their new podcast, “The Lighter Side with Spontaneous Combustion.”

“I have no idea who was on the team in [1995], but [we] have been continuously passing down this tradition of the games that we've either learned or created and the culture of this club and our traditions,” Bert Odinet, the current co-president of SpoCo and a junior at Hanszen College, said. “We've been consistently able to make people laugh for all of those years.”

In a normal year, SpoCo holds a show every one or two months, during which they perform and improvise within a framework of short and long-form games. According to SpoCo member Braedon Schlechte, the group also tries to get real-time suggestions from the audience and incorporate them into the performance.

“We'll combine those with the rules of the game, and try and make stuff up and make the people go, ‘Haha. Look at them. They're funny,’” Schlechte, a Martel College sophomore, said.

After everyone got sent home in March, SpoCo members took a break from rehearsals but continued staying in touch through Dungeons and Dragons sessions over Zoom. According to Keshav Wagle, the remote co-president, the group wanted to find a way to remain relevant on the Rice campus despite bans on social gatherings.

This led them to the idea of starting a podcast: what Keshav Wagle described as the “perfect way” to engage with the audience at Rice right now, as well as the Houston community.

“We realized that the podcast format could be really, really good for our style because it's kind of off the cuff,” Wagle said. “We don't really ‘plan’ what we're going to say –– it's kind of a conversation and it’s a way that people get to know us more personally, and also for us to showcase our improv talents.”

The podcast is produced and edited by Wagle and his brother, Rishi Wagle, who recently graduated from Brown University. Each member has their own microphone, which was purchased specifically for this purpose, using the club’s budget. Keshav Wagle records the Zoom call and uses that to line up each audio file using Audacity.

The group records each 30-minute episode of the podcast on Sundays and Keshav Wagle spends most of Sunday night and Monday editing it, adding voice enhancers and reducing background noise.

“I'll take out random breaths or whatever,” Keshav Wagle said. “One time Bert burped on the podcast. So I took that out. That was pretty funny.”

Each segment of the podcast lasts about 10 minutes. There’s a game, a free-form segment where members answer questions and the last part, “good, bad and really bad advice.” SpoCo member Lily Sethre-Brink said that although she enjoyed playing a “possessed doll” on one of the episodes, the part she enjoyed the most was a joke in her favorite part of each episode –– the “advice” section –– that never made it to the podcast.

“Basically, I was ‘really bad advice’ twice,” Sethre-Brink, a sophomore at Baker College, said. “The world will never be able to listen to it because it wasn't PG-13 … now I'm banned for a small period of time from the ‘really bad advice’ segment because I just, I went too hard.”

On Sunday, the group warms up with a pre-recording session over Zoom.

“Everyone sort of dances around in their chair, gets energized, that sort of thing, so that we have positive energy going into the recording,” Odinet said.

SpoCo is “self-coached” –– senior members teach old game formats to newer members, and the framework is revised over the years. This year, they’re having to make changes to their performances to fit the new podcast format, too.

“We'll take a game that maybe someone came up with, or someone adapted from a game that we already know, we try to make different quirks,” Wagle said. “It's essentially just workshopping and workshopping until we like the game the way it is. And then we'll try it on the podcast.”

No one on the team has any experience with producing a podcast, which has come with its own set of challenges –– according to Odinet, it’s difficult to keep track of all the inside jokes that are built with the audience over the course of an episode, make sure that the audience is engaged, and avoid rambling or boring the audience.

“We're sort of all learning this together, and we don't have a coach,” Odinet said. “Speaking to an audience that's not there ... I learned a lot doing that between episodes one and two. It's [easier] to gauge the in-person feedback from a live audience.”

While the games and characters that they come up with every time are different, the dynamic between a group of members tends to remain the same –– to make sure the podcast stays interesting, SpoCo therefore tries to make sure that each episode features a different set of members.

According to Sethre-Brink, going through the format for each episode beforehand allows members to highlight each others’ strengths and make sure that they have their moments to shine.

“We all have different improv styles and different things that we rely on a little bit. I think to some extent, like, we know each others’, but every group is a little bit different,” Sethre-Brink said.

Performing comedy improv without an audience has been a new experience. Wagle, who has also done stand-up comedy in the past, said that even though the first two episodes have got over 170 listens so far, it’s been difficult to gauge the audience’s response without immediate feedback.

“One vital thing I've learned is that you don't know what's funny, no matter what,” Wagle said. “Yes, we have ourselves, but I could think something's funny and everyone else could think, ‘man, that sounds so stupid’ or something like that, right?”

Schlechte, on the other hand, thinks that the biggest challenge for SpoCo isn’t the lack of a live audience –– it is the fact that the members can’t meet each other in person.

“I don't think the audience necessarily has too great of an impact,” Schlechte said. “When you have the rest of the team, sitting there, looking at you, giving you suggestions and responding with real-time feedback … I think that would change the energy more drastically than if we had an audience listening in.”

Sethre-Brink said that SpoCo members having a strong sense of friendship even outside of practice is what makes their group unique and makes the performances work so well.

“I don't think I could have got through my first year of college without them,” Sethre-Brink said.

Odinet said that he remembers a moment from last year, when he was walking back from practice with the SpoCo president at the time.

“[The president] put both hands on my shoulders and said, ‘Bert, this club only exists because we want it to. There's no guarantee. No one's making us do this,’” Odinet said. “But I think that it definitely does speak to the strong relationship and friendship that all of our [former and present] members have with each other since the early ’90s.”

Wagle said that even though brainstorming and thinking about the podcast has been a lot of work, it’s very important for SpoCo to continue doing what they love.

“I can tell you right now, when we started doing this podcast, it was all I could think about, because I was just so excited to start performing for people again,” Wagle said. “And then when we finally put it out, it just felt really nice.”

Odinet said that he had not done improv before coming to Rice, but it’s become one of his favorite things to do on campus.

“We've been consistently able to make people laugh for all of those years,” Odinet said. “It's definitely important to sort of keep these traditions and the performing arts clubs going during the pandemic. And it's important to look forward and think about how you're going to be passing that on after we're out of the woods.”

You can find The Lighter Side with Spontaneous Combustion on Spotify, Apple Podcasts, Google Podcasts and anchor.fm. New episodes come out every week.