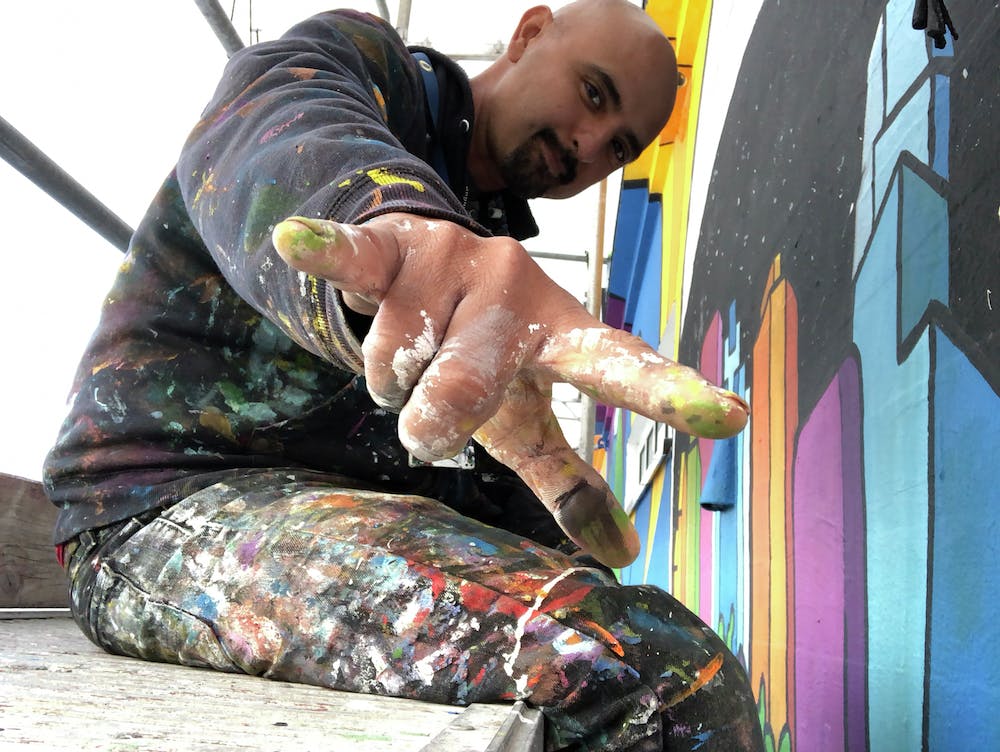 This week, another prolific Houston artist is making their mark on Rice’s largest canvases in the next installation of the Moody Center for the Arts’ season of “Creative Interventions.” Through the week of Oct. 26, internationally acclaimed Houston-based graffiti artist GONZO247 is joining forces with Rice students, alumni and community members to create a mural in celebration of Owl Together, the first combined celebration of Homecoming & Reunion and Families Weekend.

The community mural will join Houston artist Jasmine Zelaya’s “Detroit Red” and Rice artist-in-residence Allison Hunter’s “The Hive at Rice” on the side of a provisional campus facility (the large white tents), adding yet another burst of imagination to the artistically vibrant milieu on the south side of campus.

From Sept. 21 to Sept. 25, the Rice community had the opportunity to submit ideas for the upcoming mural via Rice Alumni social media channels. Making a point not to give too much away about the final product, GONZO247 said the mural will incorporate some of Rice’s iconic symbols and traditions such as the Sallyport, owls and Beer Bike, all united by his signature graffiti style and explosive color.

GONZO said he will lay the groundwork for student, alumni and community volunteers — who can sign up to help paint in one-hour slots throughout the week — by drawing out a skeleton of the overall design and asking participants to fill in sections depending on their comfort level. Far from being a strict or formal project, GONZO says everyone is welcome regardless of skill set, and the endeavor is wholly about fun and community building.

“Some people, when they think about art, they have this idea that it has to be perfect or done in a certain way,” GONZO says. “But for this experience, I want people to understand that art is about having fun, it’s about a process — the process in itself is the art. As long as you have the willingness to learn or try something, then that’s all we ask.”

GONZO247 is what Houston native Mario Figueroa Jr. calls his “nom de can,” a graffiti tag he adopted at just 17 years old. The son of Mexican immigrants, Figueroa said he didn’t have access to traditional or professional artistic institutions, nor did his parents see art as a viable career.

The young artist’s passion for graffiti bloomed as he came of age during Houston’s rap/hip-hop renaissance in the late 1980s and early ‘90s, and saw that graffiti was the visual language of an inner city culture that was fueled primarily by young people of color.

“I think when you’re a Brown kid from the east side of town, seeing classical architecture or elaborate Renaissance oil paintings, I couldn’t connect with the content and I also couldn’t connect with the materials, the mediums,” Figueroa said. “But when I saw a Brown kid climbing a fence with a spray can [and] making something, I could connect with that immediately because I knew how to use spray paint … that was kind of the great equalizer. Because no one really knew how to use spray paint for art, there was no right or wrong way to do it.”

Since then, GONZO has been at the heart of Houston’s graffiti art culture which has grown exponentially since the early ‘90s, cultivating the local street art movement to be perceived positively by the public. Today, his labor has paid off — along with his personal work gracing the walls of George R. Brown Convention Center among many other locales, GONZO said he sees a new mural going up practically every day.

“It’s a great time to be an artist here in the city of Houston,” he says. “Houston’s art scene as a  whole, considering everything that’s going on, it’s really hanging on and continuing to make statements worldwide.”

GONZO said Rice approached him with the idea for this collaborative artwork earlier this year, and since seeing some of his favorite street artists like David Ellis and Barry McGee (artistically known as Twist) exhibit their work on campus in past years, he says it’s an honor to now make his mark.  “I feel like Rice has always had their fingers on the pole as to what’s happening artistically,” he said. “Especially now with all the other [installations] they’re doing related to this [project], it really just shows how the university embraces the arts. [For] someone like me, this kid who started off as a graffiti writer, to be welcomed to the university [and] be trusted to work with students, staff, faculty, alums — that means a lot to me, and it just shows the character of the university. That’s amazing to me, period.”

For GONZO, audience participation is critical to spreading the creativity and inspiration that sustains Houston’s artistic vitality. He said he hopes that Rice community members who contribute to the new mural will walk away with a sense of pride and ownership of the piece. “I feel like the more information and the more empowerment you give people with art, it really does spread out,” GONZO said.

Rice community members can sign up for slots to help paint the new mural by visiting owltogether.rice.edu. The finished artwork will be revealed on Nov. 1, accompanied by a virtual talk from GONZO.